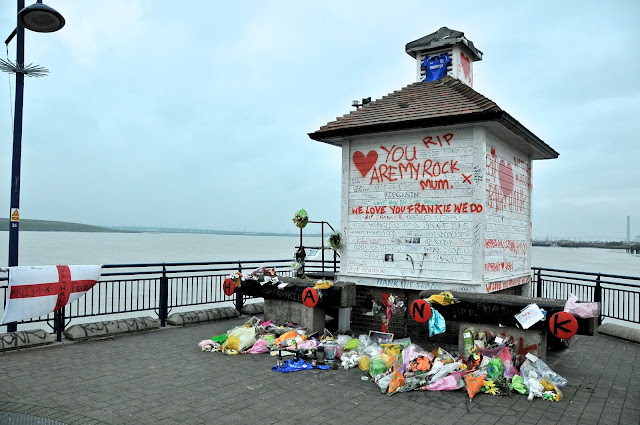 The photo above shows the small clapper board hut at the far end of the dog leg of Erith Pier. Apparently a young man had a row with his girlfriend, then made the unwise decision to throw himself into the Thames from the end of the pier. He did not survive. His friends and family created the "Shrine" you can see above. As well as the graffiti and flowers, there are candles, photos and bottles of what used to be lager - but persons unknown appear to have opened and drunk them - the contents now are still roughly lager coloured, but only resemble the brew after it has gone through a set of kidneys. I think this kind of public display shows a change in the social perception of grief and loss. It used to be that mourning took place in private, whereas certain individuals feel the need to make some kind of physical statement of their loss; this to my mind first became apparent when Diana, Princess of Wales died, and thousands left flowers at the gates of Kensington Palace. Some commentators noted at the time that the mourners were not unwrapping the bunches. It became apparent that this was to subconsciously display the fact that they had been bought from a shop, not plucked from a public flower bed as in "I'm serious about this, I spent good money on these". Nowadays, one sees post fatal accident roadside tributes on a regular basis; the end of pier display is merely another version of this; indeed, there seems to be almost an "arms race" to create the biggest and gaudiest one - perhaps in a similar manner that was shown by the traveller girls in "My big fat gypsy wedding" all wanting to outdo each other with the largest and most excessive wedding dress. Subtlety, understatement and good taste do not appear to be determining factors.
It seems that things are now kicking off in respect of the redevelopment of Erith Riverside Gardens. There is an article about the new proposals in the News Shopper here. Basically the council want to build flats and  housing on the prime piece of open space in Erith; it is the one area of free access to the River Thames in the whole of the borough, and the council want to block it off for more housing no - one needs or can get a mortgage for. In response to this, a Facebook group calling itself D.E.A.T.H (Defend Erith Against The Highrises) has also been established. Erith MP Teresa Pearce is against the development, as is erithtown.net web master Brian, both of whom have been in contact with me during this week. Another pressure group - Friends Of Riverside Gardens Erith (FORGE) has also been set up. Erith activists certainly like their acronyms! I reckon these groups need to unite for there is strength in numbers. I recall attending a meeting in the Running Horses about eight years ago when a large group of local residents told the powers that be that the Erith Riverside Gardens were sacrosanct - and ever since then the issue has been bubbling on. Erith has little to attract visitors or outsiders; the one thing we do have is the open river frontage, and the Council wish to do away with it. I think this is a classic case of "the locals won't object - most can't walk and chew gum at the same time anyway" kind of attitude from local councillors who don't live in the area; they all live in "posh" areas such as Bexleyheath and Sidcup. (I use "posh" in the loosest possible sense - in that there is a lower percentage of facial tattoos per head of population than found in Erith).  You can see a copy of the latest river front development propaganda leaflet below - click on either image for a larger view. Personally I think we need to metaphorically descend on Councillor Teresa O'Neill with flaming torches and pitchforks, as it would seem that she and her scheming cohorts are impervious to reasoned argument. 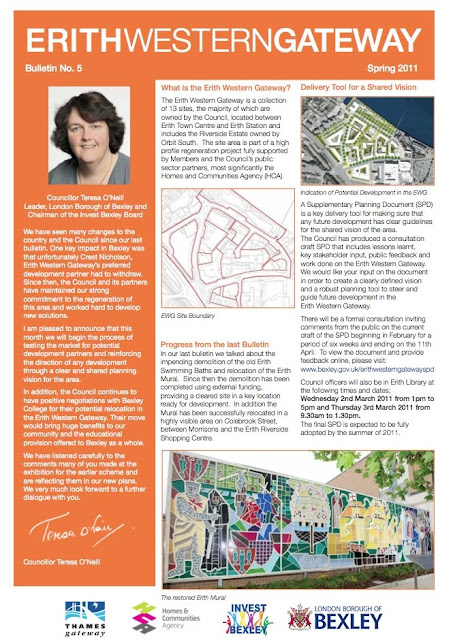 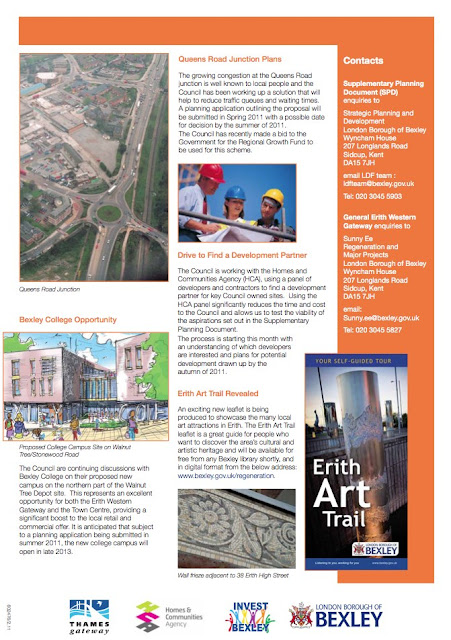 The 99 bus route from Erith to Woolwich via Bexleyheath has had a bit of a revamp; the route is now run by Stagecoach buses; on Thursday morning they launched a brand new fleet of double decker Alexander Dennis Enviro 400 buses (thanks to Steve and Justin for the technical background). They are economical, quiet and have a lower environmental impact than the outgoing models. inside the lower deck has much more space, a greater number of seats (including a nifty single seat in a cubby hole directly behind the drivers' cab). They have improved security with multi camera CCTV and a display mounted on the bulkhead by the stairs to the upper deck. When I travelled on one on Thursday it was so new, the packaging was still on the TV display. They also have not yet had external advertising posted on the upper body panels, as is customary. I had been unaware of the launch, as was thus a bit surprised when I saw a number of transport enthusiasts at key points on my journey, eagerly photographing and videoing the new bus model. One chap who I actually saw photographing the 99 I was on has his Flickr photo stream here. Although you cannot see me, I was actually on the bus in the photo, on my way to Plumstead on my daily Dad visit.  I had planned to show a few photos of my own, but events seem to have conspired against me; every time I hear a 99 passing Pewty Acres, I grab my Nikon D300 and go out to take a shot, only to find it is one of the old models that are being phased out. The same thing happened yesterday evening when I went to the bus stand in Erith town centre, and watched a few old 99's pass, only for it to get dark before a new one came into view. Never mind, maybe in time for next week.
Someone has been getting rather over enthusiastic with PhotoShop recently. I noticed that a large banner has been hung from the exterior of the shabby and tacky discount furniture and bedding shop in what used to be the outlet occupied by Wise furnishings. It publicised a soon to open gym and Thai boxing academy. I checked out their website, which is the Nemesis Academy and found the online flyer you see below. I guess that the photo of the bedding shop is meant to be an artists' impression of what it may look like when the gym take over the building. A pity they did not digitally edit out the sheet of chip board that replaces a recently smashed shop window in the photograph. 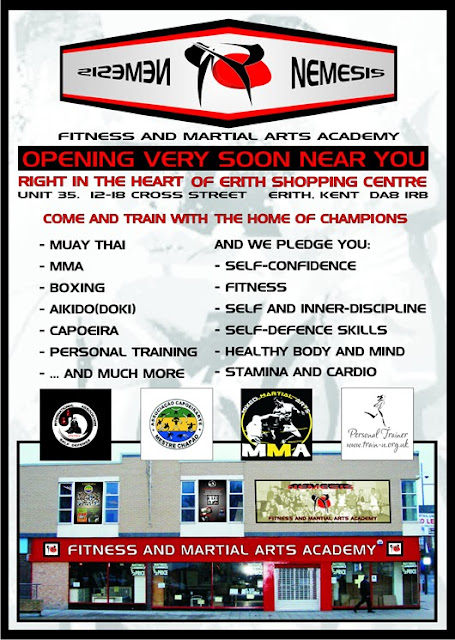 The press have had quite a field day with the forthcoming launch of the Apple's new version of the iPad; personally I don't think it deserves being called the iPad 2, more like the iPad 1.5. It does not really offer very much more than the original fondle slab (as The Register is so fond of calling all such tablet computers). An interesting run down, comparing the rumours with the reality of the new machine can be read here. It is thought that much more revolutionary features are being planned for the iPad 3, due out at around Christmas time. I will wait and see, and just hope that my elderly and somewhat rickety Asus EeePC 901 Linux netbook will see me out until then. 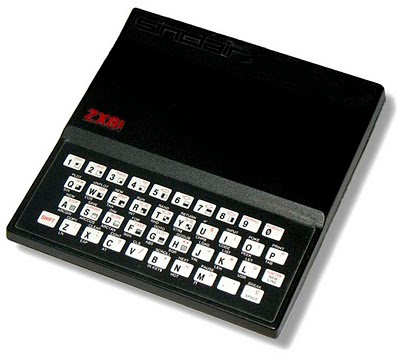 This weekend marks a very important date in the history of British computing. It is the 30th anniversary of the launch of the Sinclair ZX 81 personal computer (image above - click for a larger version). This was the piece of kit which kicked off the home computer revolution in the United Kingdom, and sparked many wide eyed kids into careers in IT (myself included). The ZX 81 had a specification that even at the time was considered quite low, but it was affordable - £69.95, which even at the time put it into birthday / Christmas main present territory for many people. It was the predecessor to the even more hugely successful and influential Sinclair ZX Spectrum. I learned to program one at lunch times at school; it was a choice between the ZX 81 and the Commodore Pet computers, which had a lot more main memory (a whole 4k of 8 - bit RAM) and a real keyboard. (This was at least a year before the BBC Model B was launched). I preferred the ZX 81, probably as it was not as intimidating and was more accessible to a newbie. You can read about the revolutionary piece of computing hardware by clicking here. 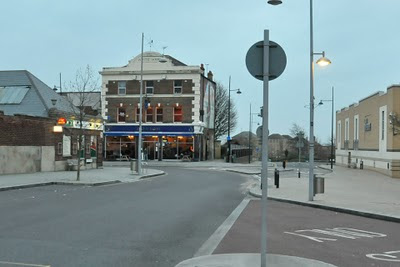 Further action seems to be under way in relation to the hive of scum and villainy that is Eriths' Potion bar. The Bexley Times is reporting that the Police are pushing for the bar to lose its' licence after a total of twelve serious criminal incidents between May 2009 and January 2011 involving violence, drugs, assault on a Police officer, and drunkenness - one stoned customer even tried to ram his car through the glass frontage of the place. You can read the whole sorry story on the Bexley Times website here.  The sooner the place is razed to the ground, the better. It has already been functionally demolished as a listed building since the current owners destroyed nearly all of the Victorian salt glazed tiling and acid etched glasswork of the original frontage, despite explicit orders from the Council not to do so. You can tell that the owners could not care less; their own website for the Erith branch even says that it is located in South West London - a pretty fundamental error - see for yourself. I predict that the place will be closed within weeks, just like its' neighbour, the ill fated Cross Keys.
I was standing on the Kent bound platform of Plumstead station during the week; there were a couple of revenue protection officers checking passengers for tickets. When they had finished I struck up a conversation with one. He told me that Plumstead has the worst record for fare evading of any station in the Southern part of Greater London. On some days, up to 75% of travellers stopped in either mid morning, or mid afternoon are without a valid ticket. The figures only improve at rush hour times, but even then, nearly a third of those checked are travelling illegally.
This weeks' video clip continues with the early 1980's computer theme. It shows a present day hacker showing streaming real - time streaming video on a Sinclair Spectrum. Some custom hardware and modern coding was needed to make this happen. Suffice to say this is an awesome hack - any kind of real time video was years away from anything the 8 bit Spectrum or any of its contemporary rivals was ever designed to be capable of. It exploits the very fast (for 1982) data bus fitted to the Spectrum. Basically the data stream is pre - encoded on the modern PC (which I note is running Fedora Linux) and then sent to the Spectrum via Ethernet (a modern bit of hardware retro - fitted to the Speccy). It then maps the video bits directly onto screen RAM over the fast data bus. If that does not make any sense to you - don't worry. The whole thing is insanely cool, and worth a lot of geek points.  Watch and enjoy.
Posted by Hugh at 6:23 pm No comments: