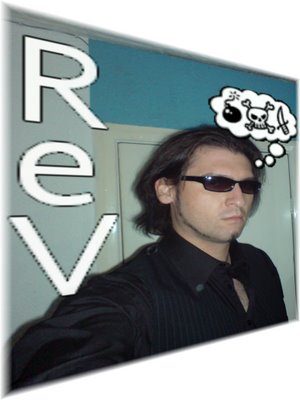 Well, what a week - and I have to say that I am more than glad that it is over. A busy time for one and all. Ian just sent me the photograph above, which is a self portrait he took during his last practice with his band Xenon. Unfortunately I could not make their last gig at the Bull and Vic pub in Dartford due to work commitments.

Barbarella had a great virtual Halloween party, that I am pleased to say I became part of; people from all over Europe and beyond joined in for a gathering that was great fun. Not realising the event was meant to be fancy dress, I went as a serial killer - "because they look the same as everybody else..." A bit of a cop - out, but at least it covered my woeful lack of preparation!

I had a rather disconcerting encounter just before 7am this morning - I was climbing the steps on the covered footbridge that leads to the London bound platform at Erith railway station, when I encountered a middle aged bloke with his meat and two vegetables on full and proud display whilst he engaged in a profuse and very public urination in the middle of the foot bridge - As soon as he saw me he said "Don't worry about me - there are no public toilets around here". I have to say that not only does Erith station have public loos, but looking at the state of his tumescence, he was finding the whole situation very enthralling indeed - he was revelling in his display of exhibitionism. I have to report that I ignored him and walked on to the other platform, much to my sorrow. A real case of the wrong thing at the wrong time. I should have had a rant at him and his hideously inappropriate behaviour, but for a number of reasons, this did not happen. Git.

I have removed the embedded video as it was turning out to be an annoyance to many of my Blog readers; It was originally posted as an experiment in embedding from a source other than You Tube. Apologies to anyone who experienced problems with the feed.
Posted by Hugh at 9:34 pm