Christmas with the Pewty. 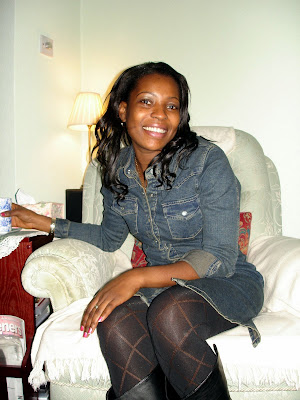 A photo of Shirley taken when we popped round to my Mum's for a pre Christmas lunch and present exchange.

So Winter has finally arrived. I was beginning to wonder of the environmentalists might have some point regarding Global Warming. I suppose that for now the jury is still out. At least now my back lawn should stop growing, it has been looking increasingly tatty over the last few weeks.

I was on the train home after visiting Dad a few nights ago. When it stopped at Abbey Wood, two teenage Chav mothers got on board. I guess that neither was more than 17 or 18 at most. One was heavily pregnant, whilst the other had a brood of three children in tow. From her conversation, the children were: Beyonce (the youngest, in a pram) Chardonnay (about 3 years old) and a boy of about 5 called Tyler. Her heavily pregnant companion was in a particularly foul mood; from what I managed to overhear - not something that was particularly difficult as both Chavettes were communing in their usual incoherent, slack jawed screech. The pregnant one has been to see her Health Visitor and had been strongly advised to give up smoking - both friends could not see the point, as surely having a small and underweight baby would be a good thing, being easier and less painful to deliver. Poor kid - cursed even before birth!

The attached video clip is a bit of a curiosity; it is a very high quality CGI animation of Neil Peart, virtuoso drummer and lyricist with seminal Canadian prog metal band Rush, drumming along to their instrumental track "YYZ" (the international code for Toronto airport). This is not an official Rush release, but something produced by a fan. It is most definitely of professional quality, and I can only guess that it was produced as a final degree piece for someone studying advanced CGI at college. Stunning stuff anyway - do take a look.