A Thursday off work. 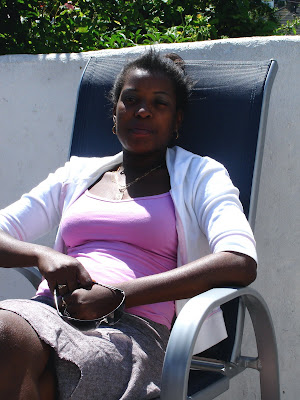 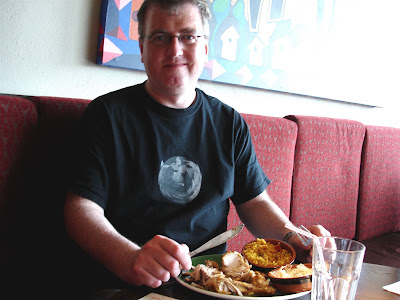 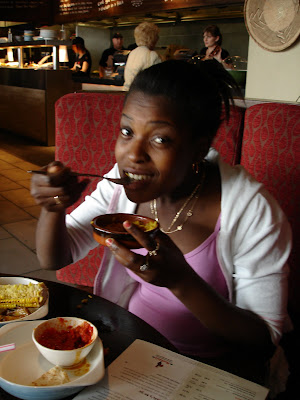 I took the day off and went down to Chatham to spend the day with Shirley. Despite the doom and gloom from the Met Office regarding the rain, the day was warm and sunny. We went to the newly opened Nandos restaurant next to the Dickens' World theme park in Chatham Dockside. I had not tried Nando's chicken before, and when I asked the waiter for extra hot seasoning he tried to dissuade me. In the end I eventually found myself adding more extra hot Piri Piri sauce from the provided bottle - not bad all round, though not the heat sensation that had been imagined by the waiter's dire warnings. An up market, more adult oriented version of KFC, and not bad for that - and Shirley got her favourite dish of all - hot, buttered corn on the cob!

Apologies for a couple of slightly blurry photos above - technically they are poor, but they capture the mood of the day better than some of the other compositionally superior shots I took. I could have played around with them with GIMP, but for once I prefer the more honest look - I suppose that I am in my impressionist mode right now. I have created a new album on my Flickr site with a whole load more new photos - you can view it here. Apologies once again to work colleagues - Flickr is blocked by our WebSense online content filter and you will not be able to see anything from a company computer. Try from your home computer and everything should be well.

I have my next post already planned, with photos taken on my way home from Erith Station this evening. It is a rant. Suffice to say it will involve my favourite piece (not) of local architecture - the return of the Tunnel of Doom (tm)! Watch this space.

Today's YouTube clip is from the incomparable Hayseed Dixie - the Dukes of Hazzard of heavy rock (or the Spinal Tap of Country music). All good stuff and a very funny video. Motorhead's "Ace of Spades" given the the Appalachian bluegrass treatment.