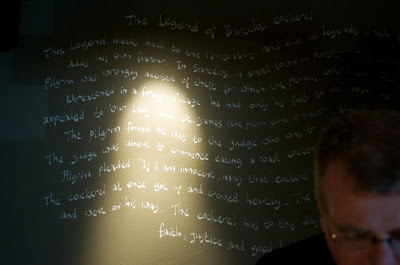 Above is an impressionistic photo of me, deep in thought. Contemplating the myriad problems that face the population of the modern world? Musing the opening of the large hadron collider ? Debating the deeper meanings of the human condition? Not exactly. More like reading the menu in the Chatham branch of Nandos, and deciding what I wanted to eat! Photo courtesy of Chrissie, who has picked up using my camera very quickly. I have said before how much I enjoy eating in Nandos, and I am a sucker for their extra hot pepper seasoning. I know that in essence that they are really a healthier, middle class Kentucky Fried Chicken - but what is so wrong with that? At least in Nandos the fresh, never frozen chicken is marinated and then griddled on an open flame, not deep fried with hydrogenated oil that was last changed around the time when Napoleon was advancing on Moscow. Until very recently, I only got to eat there when I visited Chatham, but a new branch of the restaurant has opened this week in Crayford. I feel an iminent visit coming on.

Have you noticed a unifying factor in relation to the retailing giant and Happy Shopper version of M&S, Matalan? All their stores are heated to levels more suited to a blast furnace irrespective of the time of year or ambient temperature. I went into the Erith branch in search of a pair of trousers suitable for work (something hard wearing in a dark colour, as to not show the stains so readily). I almost turned around and walked out - the place was stuffy as hell and hot; goodness knows how anybody works in the place. I know the powers that be want to introduce legislation to govern maximum working temperatures, as well as the existing low temperature law. Matalan will be hit hard, as it would appear that none of their stores has basic ventilation, let along proper air conditioning. I would have complained, but I was so lethargic and listless due to the stifling atmosphere I decided to beat a retreat to the comparative comfort of Morrison's car park. Diesel fumes have seldom seemed so welcome.

You may not have noticed that this is actually the second Blog posting of this week; I sent out a limited update on Friday night to a select few people, letting them know the news about Major Fraser's forthcoming induction in October, as a Member of the British Empire (MBE). See the story and photos below this posting. I don't think it can be much longer before he is promoted to Lieutenant Colonel.

I have mentioned before in passing that The White Hart pub in Erith has been closed for renovation for some months. I have been quietly hoping for a sympathetic refurbishment and a hostelry offering home cooked food and at least one real ale. Unfortunately the new frontage has been unveiled this week, and it shows a large purple and metallic silver name board with the monicker "Potion" - there is even an umlaut over the first "o" - I don't know if the owners realise this means the name reads phonetically as "Pooshun". Somehow I think the name will be entirely appropriate, as looking through the new glass frontage at the as yet uncompleted bar, I can see immediately it is going to be filled with baseball cap wearing dicks drinking one of the eight additive laced, hyper carbonated fizzy lagers spewing forth from the super chilled gas taps that have been installed on the new, brick built waist high bar. All of the historic wood, etched glass and hand glazed tile work has been indiscriminately ripped out. Within days of opening I absolutely guarantee the first arrests for fighting and drug dealing will be made. Avoid the place at all costs.
Anyway, to finish; below you will find a short documentary showing you how to prepare one of my very favourite Indian dishes - the spicy and delicious Chicken Vindaloo.