Short is the new long. 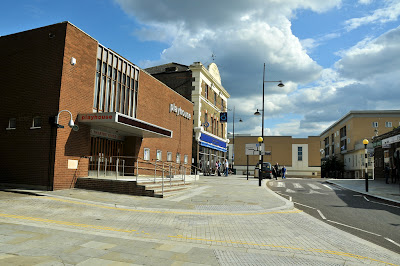 The photo above shows Erith Playhouse alongside Potion Bar - which is set for its' reverse facelift, to return it to the traditional look it had before the current owners despoiled it, breaking a number of planning laws in the process. Unlike Potion, which attracts the local scumderclass and is a haven for illicit drugs and nefarious affairs, Erith Playhouse is a beacon of good taste and civilisation in the area. It is the largest amateur run theatre in the London Borough of Bexley. You can read more about the history of the charitable trust here.
Never mind the forthcoming (and to my mind both unwanted and dreaded) London Olympics. The travel disruption that is coming in the summer of 2012 has been well documented by Charlton based fellow blogger Darryl, of the excellent 853 Blog. What is more pressing and insidious is that South East trains are cutting the number of carriages they run, even on peak time rush hour services right now. For example, on Thursday morning I got on the 07.12 service at Erith, heading for my interchange with the Docklands Light Railway at Greenwich. The train is normally formed of a minimum of eight, and quite often ten carriages. On Thursday it was only four carriages long. It was packed to the gunwales when it arrived at Abbey Wood, two stops and around six minutes later - and it still had to make all the way up the line to London. This short stocking is becoming increasingly common both in the morning and evening rush hours. I have seen several incidents of heated arguments, and a couple of fist fights between hot and angry commuters who are stuffed into far too small a space. This is fast becoming a daily occurrence. I can understand the shortening of trains in the middle of the day, when demand is lower (I travel on them at midday, when they are regularly 4 - 5 carriages and it is a sensible move - the lesser weight means less traction current is required, and a few quid saved on the electricity bill). Short trains at peak times is however utterly unforgivable.
Another train related item that springs to mind is something that was originally prompted by a recent letter to the Times by a resident of Sidcup. He pointed out that on the rail journey from North Kent into Central London, on which ever line one uses, the mortar between the Victorian brickwork of the tunnels and bridges is alive with large weeds, and even fully formed bushes are living in the old and crumbling soft mortar. The plants must be significantly damaging and weakening all of this historic civil engineering. It would seem that maintenance cuts may lead to serious incidents and possible structural collapse unless some serious remedial work is undertaken sooner rather than later. I have heeded the gentleman's warning, and taken a good look out of the window when in the vicinity - when pulling out of the tunnel that connects Maze Hill and Greenwich Station for example, the foliage is thick enough for David Bellamy to run an entire TV documentary series on it. This cannot be good for the structural integrity of the brick work. I hope that something can be done before an accident becomes the direct result of the neglect.
The last train related item (I promise!) happened on the 07:12 train from Erith to London on Friday morning. I was the passive observer into a small piece of almost docu drama theatre. Just for once, the revenue inspectors and British Transport Police were active in the morning rush hour - something that I have not seen for many years. They boarded the train at Belvedere and immediately set to work checking tickets and Oyster cards. It only took a few moments before a labourer was vocally protesting that he had not been able to buy a ticket at Slade Green because the office was not open. The inspector phoned the Slade Green ticket office to confirm that it had indeed been open since 6.30 that morning. The offender then said he could not see it was open because the sun was in his eyes (!), and started shouting. In an already crowded carriage, this scene was witnessed by an audience of around thirty other bemused passengers. The individual got very aggressive, and repeatedly refused to pay up. This continued until the train reached Woolwich Arsenal, where the leader of the British Transport Police group said that he had had enough, and bundled the by now shouting and threatening scrote onto the platform, where they put out a radio call for a van to take him away as the train drew out of the station. Scum that cheat the railways out of legitimate fares end up costing us honest travellers, as the costs get passed on to the fare paying public. In effect the cheats are stealing from all of us.

Here is a little Easter Egg. Answers on a postcard (or an Email if you so wish) as to what the somewhat tenuous connection between myself and this person is? Wild guesses, speculation and supposition are welcomed. Go on - have a go. A hint - her name is Erica Nego. Get Googling...
The Nazi Washing Machine has finally met its' Stalingrad. My old washing machine, was so called because when on final spin it has been sounding like a cross between a WWII Tiger 1 main battle tank and a Stuka dive bomber. On Wednesday I put a load of T - Shirts in it, but after the wash cycle had started, I noticed that although I could hear the electric drive motor running, the drum was not moving. My guess is that one of possibly three things has happened. Firstly, the drive belt has become detached or broken; secondly the clutch may have failed to engage due to wear, or thirdly, and to my mind most likely, the gearbox has failed. The reason I favour the latter is that the dreadful sounds the washer has been making for the last few months have definitely sounded suggestive of mechanical gearing in nature - especially the JU 87B Stuka like whine. It had got so bad that I would stay out of my kitchen when the machine was on a spin cycle, on the grounds I would not have been very surprised had it exploded. Following my policy of employing and supporting local companies wherever possible, I went to Wellingtons Electrical Ltd in Northumberland Heath for a replacement washing machine. I selected a Panasonic NA 147VB3 model, which has excellent reviews, and is just about the greenest washing machine available in its' market sector. Wellingtons are a family run company that have been trading continuously since 1898 and have a very good reputation for both a reliable and personal service. I have used them before and been very pleased with their work. I could save a tenner or so by buying online, but the hassle and dubious customer service and ultimate lack of accountability really discouraged me from so doing. I know if I get kit from Wellingtons, that they will not only deliver, but install it at no extra cost and also take away the knackered old machine for responsible recycling. I am not receiving any payment or special discount for mentioning Wellingtons - I truly think they are a great example of a very well run local business that deserve our patronage and custom. 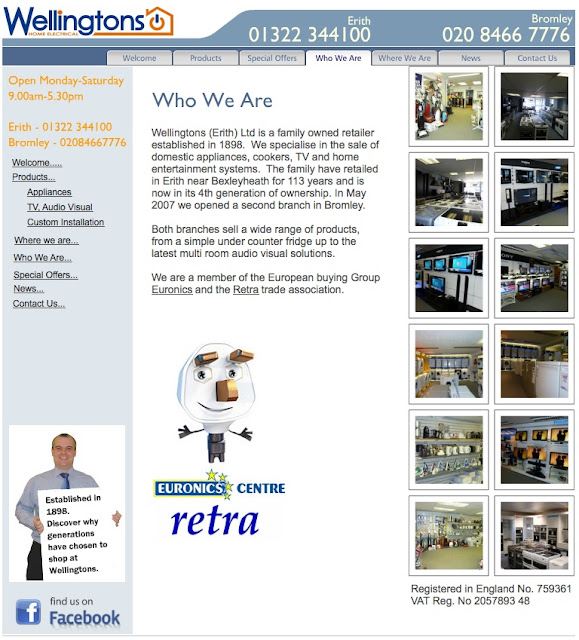 Audi cars. What is with all of the bling? Why do Audi's designers feel the need to equip each model with  white LED "Christmas lights" under the main headlights? They look tacky and cheap in the extreme, like a woman using white eye liner. This is compounded by the current fad for cars painted in bright Titanium white - which rather tends to make them look like mobile fridge freezers in my opinion. Another fad which seems retro in the extreme is the current obsession with cladding crap cars in fake carbon fibre cloth. I saw a Citroen Saxo in the week which had its' roof covered in a layer of fake carbon fibre - to my mind this is a very retro statement, harking back to the 1970's, and the then fashion for vinyl roofs. It is almost like a step back in time to the Sweeney - but with cars with less flair and elan than in the days of yore. The cars getting the treatment nowadays are without exception cheap and tinny chav mobiles. 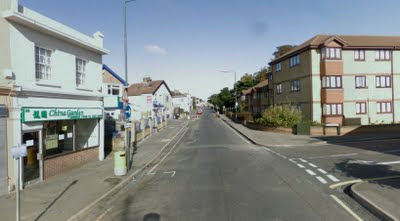 The News Shopper dropped the ball quite markedly over the weekend; there was a very serious assault outside the Chinese Garden takeaway restaurant in the early hours of the morning in Albert Road, Upper Belvedere. (See the photo above - click for a larger version). The initial rumours were that a person had been murdered. The road was closed off and covered with Police and forensic officers for over twelve hours - I went up to take a look, and can confirm the place was being treated like a murder scene. The News Shopper did not pick up on the story until Saturday afternoon, even though the incident had happened at around 1am the previous day. When they did post a report on their website, they said that there had been an assault, and a man had had his glasses knocked off. Half a dozen Police vehicles, and around ten officers on the scene, the road taped off and the 401 bus route diverted for most of a day does not really reconcile with a minor fracas, and I am surprised that they initially drastically under reported the situation. They re-wrote the story later, and it currently reads like this:

"Police were called to Albert Road at around 1am yesterday morning (August 6) after the man was attacked near the Chinese Garden. A 23 year old man who was stabbed outside a Chinese takeaway ‘died twice’ in the moments after it happened, it is believed. He had been stabbed four times and was taken to a south London hospital by ambulance and accompanied on the journey by an air ambulance doctor.His condition is now said to be stable.It is understood that the stab victim was resuscitated once in the ambulance and once on the operating table at the hospital. You can read the full story at the News Shopper website here.

You may already be aware that I absolutely detest wasps. I cannot think of any other life form that I would rather see completely removed from the planet. They perform absolutely no useful function whatsoever - they are just flying stinging machines. The sooner that they are completely eradicated and made utterly extinct the better. To this end you can visit the UK Wasp Watch website here. They aim to map as many wasp nests as possible in order to eradicate them. I wish them every possible success.

I observe from the posters that I have seen around London that a show is transferring from Broadway to the West End. It is apparently a mix of This is Spinal Tap and the Rocky Horror Show, called Rock of Ages - a comedy musical based on 1980's melodic rock and hair metal. I have not got a clue what the show will actually turn out to be like, but I have to admit that the idea is intriguing. I just wonder if their amplifiers go up to eleven? On a smaller and more local scale, Mort - The Musical is being performed at Greenwich Theatre between the 10th and the 13th August. The musical stage version of the classic Terry Pratchett fantasy comedy is being staged by the Youth Musical Theatre group. You can read all about it by clicking here.

The final video clip this week comes to you courtesy of Adam, a member of the MAME development team; he's also a work colleague and fellow geek. Check out this fully driveable video games console. I am not sure what the UK DVLA would say about it, but it certainly makes for entertaining viewing.