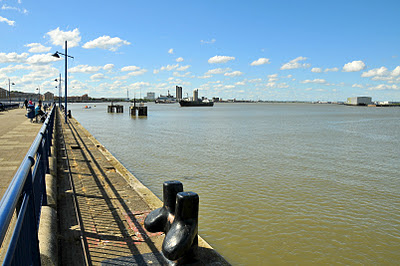 A view up the River Thames towards London that I took on Erith pier a little while back. The pier really is a lovely place to be on a bright and sunny day. The River Thames has certainly got one hell of a lot cleaner over the last few years - only a couple of days ago, signs of a breeding colony of Sea Horses was discovered in the river at Greenwich. The BBC News Website featured the story here. It could do with a toilet, and running fresh water for washing and making tea, for the anglers who often stay all day, or more commonly, fish all night. I reckon it would add to the whole pier experience. Saying that, Bexley Council would never do it - as they would be contradicting their policy of closing and selling off all public conveniences, as has now already happened. There is not one single council owned public toilet in the whole of the London Borough of Bexley. It is both tragic and intensely annoying. The last public khazi to be sold off, which is located next to Bexleyheath library, is about to be converted into an undertakers office. Where are the public meant to go when they need to relieve themselves? The toilets in pubs and restaurants are generally reserved for paying customers, which is understandable but a bit rough for the others.
A small group of local people, mainly from the Dartford area have set up a new online business called Adopt a Pickled Onion. Basically they have set up an unusually themed online greeting card and novelty store. The down side has been some of their rather questionable marketing methods. They have been putting self adhesive promotional stickers in all sorts of public places, including on the windows and doors of local buses and trains. This is regarded by the authorities as no different to scrawling graffiti, and the perpetrators can be subjected to a fine if caught. I wish the company well; I am always keen to support independent local businesses - they just need to ensure that their promotional and marketing strategy stays on the right side of the law. You can read more about the story here.


The work on Erith Station continues - very slowly. This week the builders have laid out some formwork to indicate the length and depth of the platform extension on both the London and Kent bound sides, and they have dug a shallow trench not more than six inches deep along the Kent bound extension - and that has been about that for a weeks' work. Bearing in mind there is a small village of converted shipping containers and Portacabins in the station car park, it would seem to infer that major resources are being deployed on the improvement works. Or apparently now; in typical Southeastern Trains fashion, the level of hot air has been high, but actual work has been minimal, at best. The online campaign to get a lift installed at the station can be viewed by clicking here. 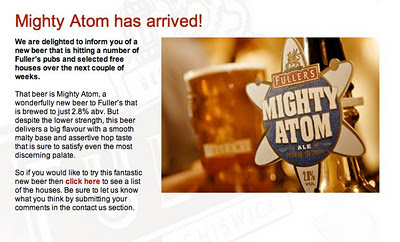 Fullers have just introduced an ultra low alcohol real ale, called Mighty Atom. It is described as a full flavoured ale with an ABV of 2.8%. I normally find lower alcohol beers to be gutless, watery and a waste of time - with the notable exception of Brakspears bitter, which is a lovely pint at a low 3.4% alcohol. I hope that the Mighty Atom lives up to the admirable reputation of the rest of the excellent Fuller's range. I am keen to give the brew a try.
In a similar fashion several of the long time vacant units in Erith Riverside Shopping Centre have been fitted out, but still now stand empty; I reckon the owners of the centre (Frogmore Real Estate) were hoping to attract new tenants by speculatively fitting windows and doors to the shop fronts. I think most pedestrians and shoppers had long ago been bored by the brightly painted hoardings covering the bare concrete shop structure behind. The trouble would seem to be that the rents on the units are so high that smaller, independent traders cannot afford to occupy them - as recently happened to the small toy shop opposite Argos, which went bust a few weeks ago. I think a combination of high rent, business rates, and low income from the cash strapped local population make a very dissuasive argument for starting a small retail business in Erith at the present depressed time. The only independent, non chain business that would appear to be doing profitable business right now seems to be the Mambocino coffee shop and cafe. The larger stores also seem to be cutting their expansion plans back, probably as they fear the recession will hit footfall and customer spending. 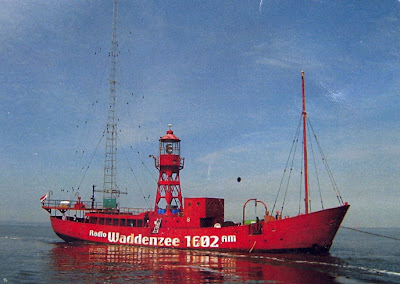 Dutch radio station Radio Seagull are broadcasting on 1395 and 1602 KHz medium wave, and their signal can be heard over much of South Eastern England. The station is broadcasting from a converted light ship, the M.V Jenni Baynton, which is moored in Harlingen Harbour. As you can probably appreciate, a lot of familiar faces from Radio Caroline are involved. You can see the Radio Seagull website here.

The traveller pony that has been corralled for the last few months on the small piece of land that is between the recycling centre in the car park of Morrison's and the riverfront walk has now disappeared. I can only presume that it has either been sold by its' owner, or that he has found another place to house it for free. It seemed to enjoy the attention that it got from people - and actually ended up as rather a portly creature, due to the amount of fruit and vegetables given to it as treats by local people. I only got a few photographs of it, even though it was around for a fair old length of time. Here is a black and white photo, taken when it first turned up on the small patch of waste land next to the Thames. 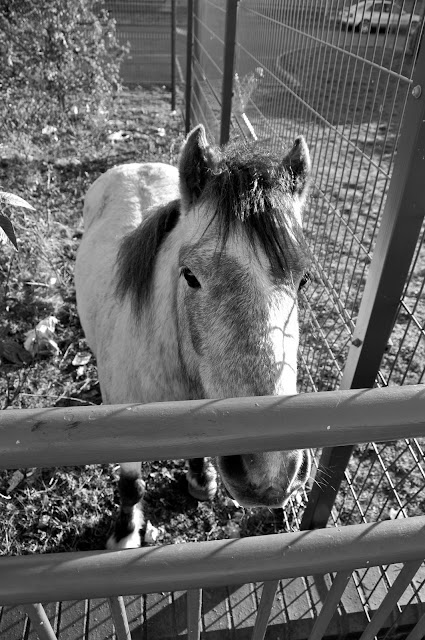 One thing that I find teeth grindingly frustratingly awful is when I hear men (and it is always men) who loudly bray "I'lll ping you an Email!"This roundly shows they know absolutely sod all about computers, and immediately highlights them as utter dickheads. Ping is a computer network administration utility, created back in 1983 by a programmer called Mike Muuss (strange name, but there you go). The Ping utility sends ICMP echo request packets to the target host computer, then waits for a response. It has bugger all to do with Email - and especially in regard of some chinless banker who thinks he is being "technical" by using the term. One sends an Email - ping is absolutely bugger all to to do with the procedure.
I came across the video below quite by chance; it shows the Ross Revenge at sea in August 1990, when I was on board. I think it was taken by one of the crew of a French fishing trawler, which often came quite close, and would on occasion drop a few fish off for us. The short lived rainbow stripes and white dove of peace painted on the funnel by myself and Nick Jackson's girlfriend caused a bit of a rumpus amongst the anoraks at the time - they thought it signalled a change in station image and direction, when in fact the actual reason was that we only had a tiny amount of paint left, which meant some nifty multi coloured stripes instead of the traditional red flash. If you look carefully, at 0.54 secs into the video, you can see a figure in a white T - shirt waving from the stern of the ship. That's me!
Posted by Hugh at 6:42 pm