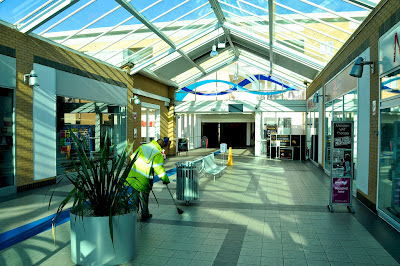 It is looking increasingly like the cut backs that have already hit so many in the local area may have yet another deleterious effect; Cross Street Law Centre is threatened with losing its’ government grant. The centre has been based in Cross Street, Erith since 2008 and offers free legal advice to around 6,000 local residents on subjects as diverse as employment, housing, debt, discrimination and benefits. Fifty per cent of the centre’s income derives from legal aid – which may well come to an end in 2013 if the planned Legal Aid, Sentencing and Punishment of Offenders Bill which is being debated by the House of Lords gets passed into law. The centre believes that if the law is passed there will be no equality in the law and rich people will have an advantage. It would seem that the legal aid bill has grown so large (something in the region of £2 billion a year) that cuts have to be made. It is just the way it is being done – the most vulnerable people are likely to lose legal advice they could not afford to pay for. With the limited hours and depleted resources of most citizens’ advice bureau, any local person with a limited income is going to find it difficult or impossible to get reliable advice. It really seems as if we are heading back into Dickensian times.
CCTV is a subject that I have rather mixed and contradictory views on. Privacy watchdog Big Brother Watch have revealed that Bexley Council have spent around £2.3 million on CCTV technology in the last four years, which puts the borough at the 70th position out of 428 UK local authorities. It is interesting that the article, featured in the News Shopper quotes comments from Councilor Peter Craske, who allegedly said “Our CCTV network has played a key role in helping Bexley have one of the lowest crime rates in London. The cameras led to 615 arrests in 2010 and 700 arrests in 2011, so they are delivering real results in helping catch criminals and prevent crime from taking place” Mister Craske talks about arrests, not convictions. Just because a person is arrested, it does not follow that they are either charged or prosecuted and sentenced. For example, in a dispute between two or more parties where an offence is judged to have taken place, it is quite common for the Police to arrest all parties and sort it out at the station, where those judged to be innocent are then released from arrest. The libertarian in me deplores the way in which surveillance cameras have pervaded British society over the last twenty years or so. As a result of the IRA terror bombing “spectaculars” in the early to mid 1990’s the government was able to push through changes in legislation to make the installation and use of closed circuit television monitoring far easier. London alone now has more CCTV cameras than the whole of the continental United States combined. This has not really done much to prevent crime; though it has helped in the solution of some nasty events. I don’t like being watched, but there is little I can do about it. As many of you will know, Pewty Acres is equipped with a variety of security devices, including a number of daylight and night vision CCTV cameras linked to a digital recorder. I feel somewhat hypocritical, but I was forced into the situation a couple of years ago due to a specific incident which I will not be recounting here. One of the bonuses of such a system is that I don’t need to answer the door if I don’t like who I can see outside. I have successfully avoided the ministrations of the number of unwelcome door knockers since the CCTV was installed.

This week marks the 80th anniversary of the BBC World Service. Despite so many people being online in the developed world, there are still untold millions of people around the world who are dependant on Shortwave radio for their news and information. The BBC is the world leader in supplying factual, impartial news and education. The BBC is also by far the Worlds' largest international broadcasting organisation, and also one with the highest reputation for honesty and integrity. You can read more about this excellent ambassador for Britain by clicking here. I am a big fan of shortwave radio, and listen for many hours each week.

Peacocks in Erith Riverside Shopping Centre is looking like the retail equivalent of the Marie Celeste; the store has now shut, making fifteen local staff sadly redundant, but the stock is still on the racks and shelves.  Somebody with a few thousand pounds to their name could theoretically buy it up and open it as a "turn key" independent clothing emporium. If I was really lucky, they would expand their range to include some quality Harris Tweed. Somehow I doubt it though. I am up for a newHarris Tweed jacket, if anyome has suggestions, they would be gratefully received.
Every so often I come across an article online, or a reference to something that really takes me back; this week was no exception. The News Shopper story about the impending closure of Nuxley Toys in Welling. They cite increasing overheads such as rates and rent; competition from the likes of Toys R Us must be a contributing factor too. I can recall when they had shops in not only Welling, but Bexleyheath, Upper Belvedere and Gravesend too. Now they are left with just the Gravesend branch, and their EBay shop online. I guess that a virtual shop may be the way forward for this excellent local, family run company. I recall as a child, they had their original shop in Nuxley Road, Upper Belvedere. I was friends with Richard Ray, the younger son of the owners – and not surprisingly he always had the latest toys. Nuxley Toys was a real innovator – they were the first place to stock Star Wars figures (if I recall correctly, even before the original movie had even been released in the UK). They also were the first place in the area to sell Top Trumps cards (Richard was a real whiz at Top Trumps – I recall getting regularly thrashed by him when we were both at Lesness Heath Primary School. Little did I realise that as he got each new set well before anyone else, he got the chance to “learn” the set – nobody had a chance until they too had learned the card set. Cunningly Richard would then move onto another set. He was the tallest boy in the final year of primary school, and I was the second tallest. Amazing what you can recall after such a long time.
It has been years since I last did any computer programming; I did a course on MS Visual Basic in the late 1990’s, but dropped out before completing the course, once I realised how limiting VB was; you were firmly kept within the Microsoft “walled garden” and were pretty limited as to what you could do; this coincided with me developing an interest in Linux (which was really only for masochists at that time). Prior to this, I had mainly cut my teeth as a kid on the classic early 80’s 8 bit home computers. My coding skills were somewhat patchy – quite good in some areas, less so in others, and my programs were a structural mess. Having said that – they usually worked – eventually. I am determined to “get back on the horse” and start coding again. I don’t think any form of modern Basic really cuts the mustard nowadays, and as previously outlined, I have decided to teach myself Python. To this end I have ordered and received “Python Programming For The Absolute Beginner” – which gets some excellent online reviews. It guides the novice Python programmer through first principles and uses the example of teaching the student programming skills by creating a simple game in the Python language – very much how I learned Basic back in the day. Incidentally you can download the free and open source Python language from here. If you have an Apple Mac, your computer already has an older version of Python loaded on it. Open a terminal window and type “Python” (minus the quotes) and you are ready to go. 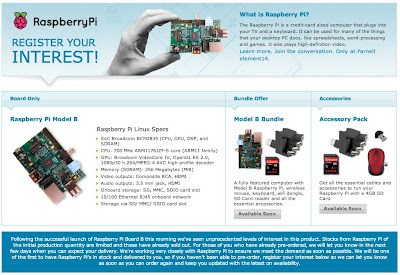 Wednesday morning at 6am saw the public launch of the Raspberry Pi computer; I was sat in my office in Pewty Acres, supping a restorative cup of Red Bush Tea, and hitting the F5 (refresh) key on my Mac keyboard, with a tab for every reseller website open in my Chrome browser. I was fully aware that interest would be intense, and the chance of me getting one of the initial batch of 10,000 units would be rather slim. What I, or nobody else realised at the time was that both the RS components site, and the Farnell Electronics websites were being hit by eager Raspberry Pi customers at the rate of 600 page views per second. By mid morning on Wednesday they reported 500,000 hits every fifteen minutes; huge multinational corporation RS Components said that it was the greatest level of interest in a new product on the companies' history. No wonder both websites crashed under the load, and were unavailable for much of the day. I did eventually manage to register my interest on both websites, but so far have not been able to place a firm order. You can see a screen capture from the Farnell website above - click for a larger view. What this clearly demonstrates is the strong and enduring demand for a simple, low cost computer; there is no way that the level of demand is just being fuelled by geeks like myself - this is a fundamental game changer in the IT world; Please note, that contrary to some uneducated comments on a few bulletin boards, the Raspberry Pi is not just a motherboard for an embedded system, it is a "proper" usable computer. The initial batch are released without a case, but when the larger production run kicks in for the mass production to go into schools and homes, it will have a case which will be liquid spill resistant, and probably transparent, so that the child owners will be able to see what is inside. The BBC News website has a report on the Raspberry Pi phenomenon here. We are seeing a happening not witnessed since the launch of the Sinclair ZX Spectrum, back in 1982 - nobody realised the ramifications of the launch of one of Britain's soon to be most popular original home computers. I feel that thirty years on, the Raspberry Pi is about to shake up the world of computer education and amateur engineering in ways that right now we find hard to imagine. The video below gives a further overview of the ground breaking computer. Please note that since this clip was filmed, the £16 Model A Pi has had its' specification improved - it too will now ship with 256Mb of RAM. *Update* - I have been contacted by Farnell Electronics, and have now placed my order. I will take photos when it arrives - more soon.

The end video this week is something rather special. It is a short documentary on the location filming of Peter Jackson's production of The Hobbit. As one would expect, the New Zealand scenery is beyond stunning. What is clear is what a huge production The Hobbit is; there is a crew numbering in their hundreds, ten helicopters, dozens of vehicles, and the transportable IT suite uses over six kilometres of RG45 networking cable. Oh, and the catering looks pretty nifty too. The documentary lasts just over twelve minutes and is well worth a watch. The two part Hobbit movie looks like it is going to live up to the high fan expectations too. Enjoy.