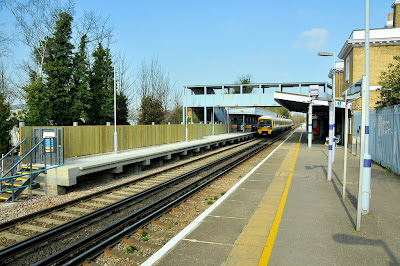 The photo above was taken by me on Friday; it shows the extension to the London bound platform at Erith Station. The work has been taking far longer than it should - a job that should have been completed in a few weeks has dragged out over many months. Finally it is nearing completion. You can see more photos of Erith Station, along with many others taken in and around the Erith area by clicking here for my Flickr Photostream. Coincidentally, The News Shopper have been quite vocal, featuring a story claiming that Southeastern Trains are the least popular train operator in the country. You can read the story here. The problem with this statement is that it is not scientific – very few travellers will have used more than a handful of the train operators, and thus won’t have an accurate view on which to base an opinion. My own view on Southeastern is a bit mixed – I travel by Southeastern trains almost every day; I have to say that overall they are not that bad – and certainly better than the old Connex, who were shockingly bad. The fact that they have increased the number of trains on the line so that we now have a train in each direction every ten minutes is good. The problems seem to come with the fact that the trains are often very short – usually four or five carriages, which is not a problem mid morning or at weekends, but can be an utter nightmare on weekday mornings when heading London bound – the train gets as far as Abbey Wood and all the seats are taken; all passengers further up the line are crammed in. I usually get off the train at Greenwich in order to pick up the DLR to Canary Wharf, and it can be a struggle to get off the train – the crowding is so intense. I see some cautious signs for optimism; the much vaunted platform extensions along the Dartford to Charing Cross / Cannon Street line via Greenwich are (very slowly indeed) coming to fruition. There would appear to be no point in extending the platforms if longer trains were not planned to utilise them. I am hoping that any extended trains are not used just for the period of the Olympic Games – when many London based workers will be unable to use them anyway. I understand one of the main factors on keeping trains short is that they consume a smaller amount of traction current – and thus it keeps the electricity bill down. There is also a finite limit to the length of trains relating to the distance between the rail points. Nevertheless I cannot see why an average train length of, say eight carriages could not be the norm. Comments from transport enthusiasts (I am thinking of you, Justin and Steve!) are especially welcome. 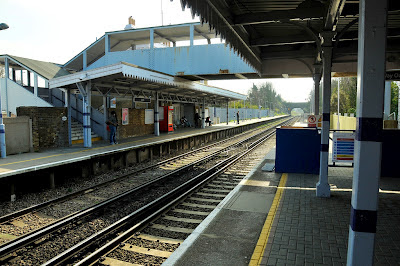 I had quite a bit of interest in my piece from last weeks’ Maggot Sandwich concerning the revamped Erith Morrison’s. I know several people on the management team read my musings on the new look supermarket. I was actually expecting a bit more in the way of feedback. Now that the place has been open for over a week, I have noticed a few features and idiosyncrasies that for me stand out. You may recall that the Peacocks clothing shop chain went bust a while back; ever wondered what happened to their stock? Morrison’s bought it, and are currently offering clothing for sale in their larger stores. The fact the stuff is ex Peacocks is not exactly hidden – the hangers the clothes are displayed on all have Peacocks logos on them – a bit of a giveaway. Another change is that now there is a bespoke pizza bar – a worker will make up a pizza from a range of ingredients selected by the customer. The bar has a range of pre – made pizzas on display to purchase if you are in a hurry, or don’t fancy a custom one. I noticed with utter revulsion that they do a sweet pizza – instead of a cheese base, it has some kind of sugar / white custard icing, and in place of vegetables and meat it has a selection of sweets pushed into the dough. This strikes me as wrong on so many levels. The thought of it completely revolts me, and makes my teeth curl. Who would want to eat such a monstrosity? I am sure there will be customers for it, but you can most definitely count me out. 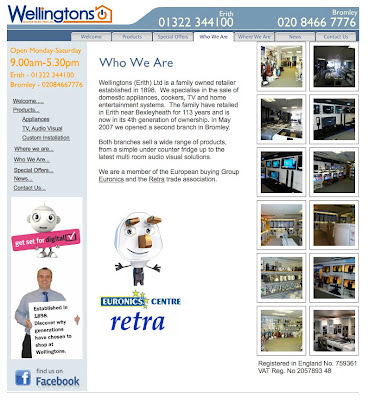 Northumberland Heath based independent, family owned local electrical retailer Wellingtons are celebrating their 114th anniversary over the next couple of weeks. Their newly refurbished store at 210 - 214 Bexley Road, Northumberland Heath re - opens on Friday 6th April at 10am. They have a whole load of special deals and a very interesting prize draw to celebrate their refurbishment. On top of this, celebrity chef and professional Yorkshireman Brian Turner CBE will be in the store all day on Thursday April 12th running a series of cooking demonstrations and preparing food to give away to store visitors. You can check out the Wellingtons store website by clicking here. 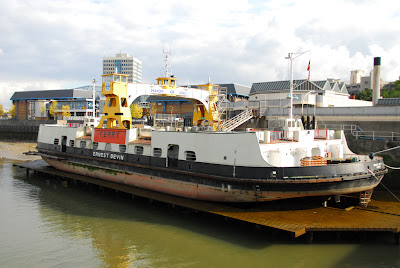 In a somewhat related topic, I don’t know if you watched last Monday’s BBC “Panorama” investigative documentary about the rise and fall of digital broadcaster and one time Sky TV rival ONDigital. The programme alleged that a hacker group was hired by a News International (owners of Sky) subsidiary in order to crack the encryption system used on the ONdigital decoder cards. Once the encryption key was discovered, the hacker group published it online, and thousands of fake decoder cards flooded the UK market, denying ONdigital income, and thus putting them out of business, leaving Sky TV as the dominant commercial broadcaster in the UK and Ireland.  It was a cracking story and made very good television. The trouble is, the story is not actually true. You can read a factual account of why ONdigital really failed by clicking here for the full story.


There has been quite a bit of hype in both the technical and the popular press around the launch of “Angry Birds – Space” with some rather breathless hacks claiming the game has been downloaded ten million times in a week since release. Whether this is an accurate figure or not is a moot point. I have downloaded the Apple Mac version from the Apple store, and have played the game. As many of you may know, I am not a gamer – I lack the dexterity or patience to get to grips with the more involved and absorbing games. In many ways I am the ideal customer for Angry Birds – you can dip in and out of it and just play in small bursts. What I discovered with “Space” is, that although the physics and strategy within the game have been updated, it is actually very easy. I completed all levels (albeit not with a full three stars on every one) in two days – a total playing time of not more that around four hours. This seems pretty poor value. I know that further levels are published on a fairly regular basis, but it does seem to me that if I, a rubbish game player can power through all levels in short time, then what satisfaction would a hardened gamer get? Talking of gaming, the press has been giving fairly high profile coverage to the story that the national retailer Game has gone into administration. Luckily (for the time being, at least) the two local stores at Bluewater and Bexleyheath are staying open. You can see a full list of the Game stores that have received a stay of execution by clicking here.
News reaches me that there is to be a remake of the classic TV comedy series "Yes Minister". To say that I am appalled is an understatement; this absolute classic series with its' superb writing, cutting satire and spot on performances cannot be emulated or bettered in my opinion. It is as relevant today as it was when the pilot episode was filmed during Margaret Thatcher's election back in 1979 - even then the pilot was withheld from transmission during the run up to the election on the grounds that the BBC feared that it could have influenced the result. You can read more about the new version here. I for one will not be watching it - my boxed set of the original "Yes Minister / Prime Minister" will get a re - watch instead.