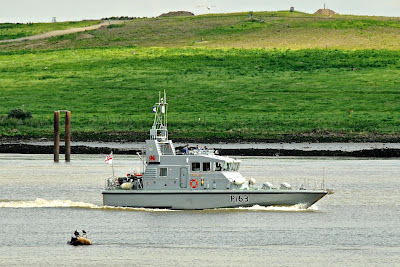 Whilst I was out photographing the volunteers clearing the rubbish from the Thames foreshore by Erith Riverside Gardens last Sunday morning, I noticed a Royal Navy short range patrol craft passing by – see the photo above (click for a larger version). I have since seen it, or one of its’ sister ships several times in the intervening days; it would appear that the navy are already patrolling the river ahead of the Olympic Games. What actual level of security they will actually add is debatable. I suspect that it probably has more to do with the security services ticking a box so that they can say they have it covered. It may also be someone in the Admiralty wanting to ensure that the navy is not left out of any possible action; after all, the RAF are providing fighter air cover, and the army are providing anti aircraft missiles and a helicopter mounted quick reaction force, so the Navy may well be thinking “me too!” The vessel pictured is HMS Express, an Archer class fast patrol vessel normally based at Penarth Marina in Cardiff Bay. Click on the photograph for a larger view. 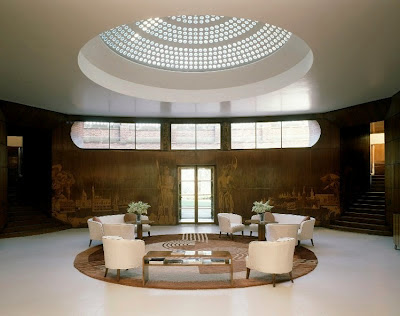 
After the coldest, wettest Spring I can ever recall I now hear that Thames Water are not going to deploy their more serious water restrictions as originally planned; the hose pipe ban remains in place (but with this much rain, what garden needs a hosepipe in the first place?) The drought order that Thames Water had planned to apply for is now apparently not going to happen. There is however no change to Bexley Council’s decision to close the splash park in Upper Belvedere – something that has incensed many local families, to the extent that a Facebook page has been set up to try and persuade the Council to reverse their decision. It is widely considered that the real motivation behind the proposed splash park closure has little to do with water conservation, and rather more to do with saving money. The effect that it will have on local families with small children would appear not to have been taken into consideration. The splash park is one of the few local amenities that appeals to children and is free; cash strapped families have used it as a cheap day out for years. Many are now annoyed that in the middle of the double dip recession, one of the few free ways to keep their offspring entertained is now not open to them. 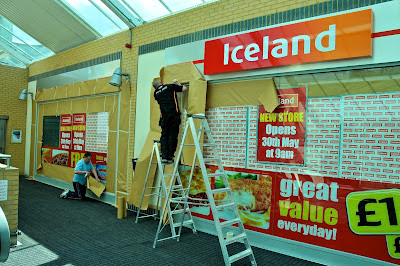 The photo above shows construction staff working to convert the old Peacocks clothing store in Erith Riverside Shopping Centre into a new Iceland frozen food shop - as you can see, it is scheduled to open on the 30th May. It may provide some competition for the existing Farm Foods shop, which sells low priced frozen goods on the site for the former Erith Co-Op store. I doubt that Morrison's will be very worried about the competition.

I found out during the week that one of the traveller cob ponies has disappeared from the makeshift enclosure next to the recycling centre in Morrison's car park. A witness saw a small group of shifty looking travellers one weekday; they took the piebald horse out of the pen, and led it on a rope up Appold Street and into Manor Road. They then led it onto the piece of land behind the Victorian terraced houses where a van was waiting. They then spent some time trying to get the horse into the back of the van; eventually they succeeded and the van then drove off to points unknown. It all sounds very dodgy indeed.


Morrison's in Erith are in some hot water with Bexley Council Planning Department. They constructed the exterior Garden Centre department without applying for planning permission; the Council have given the company a rather severe slapped wrist, and if you walk through the car park of the local supermarket now, you will find a number of retrospective planning applications plastered on lamp posts. I cannot see Bexley Council turning down the application; after all, Morrison's are the largest employer in the town, and probably the largest generator of wealth as well. 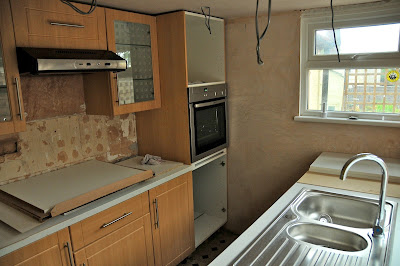 As you will see from the photo above, the refurbishment of Pewty Acres continues apace. My living room still resembles the kind place a compulsive hoarder would feel comfortable in, but things are slowly improving thanks to my sister giving me a hand shipping out a load of stuff - the best for donation to charity shops. I am the opposite of a hoarder - I like clean, uncluttered minimalism - probably why I was to taken with Eltham Palace as mentioned earlier. The shot above was taken on Friday evening; it shows the fan oven in place, though there is still a large gap above it where the combination oven will be installed on Monday afternoon. The LED ceiling and under cupboard down lighters are also still to be installed.  After much thinking, I have decided that as a bog standard B&Q glass splash back is unsuitable to go behind the hob (all standard splash backs are made of ordinary glass, and cannot be used near heat sources, only special toughened ones can be used), I have asked my builder / project manager to source a bespoke solution from a specialist company. Photos will be taken and posted online once all of the work is completed.
There have been occasions in the past when a couple of people have accused me of being paranoid about a number of issues, not least concerning the security of my identity. It is true that I do keep my personal data profile as low as possible – no passport, bank loans, mobile phone, car or oyster card to aid tracking me. This may sound rather over the top, but investigators working for Channel 4 documentary series Dispatches have discovered some extremely worrying information. It turns out that over a thousand staff in the Department for Work and Pensions have been illegally accessing confidential information on claimants. Most people worry about hackers accessing files from Government computer systems; it now turns out that we are at a greater danger from civil servants. Web based technology commentator ZDNet reports: “There is one, simple fact: from health records to criminal records, employment details and other personal data, government databases are not only open to abuse, but are actively being exploited by the very people we supposedly trust with our data. Crunching the numbers: the DWP has a database of around 100 million people. More than 200,000 civil servants have to be vetted to extremely high standards before they can access this database. Between April 2010 and March 2011, 513 civil servants were found to have made “unauthorised disclosures of official, sensitive, private and/or personal information”. The year continuing, between April 2011 and January 2012, more than 460 staff were disciplined. The DoH on the other hand said it did not log each and every breach of unlawful access to U.K. medical records. It did say there were 158 recorded breaches in 2011. Only four years earlier, there were only 28 cases, representing a fivefold increase.” This is all very worrying stuff. It however in no way surprises me; in addition, the BBC News website is reporting that the Police are beginning to use tools that enable them to extract data from mobile phones and retain it indefinitely, activities that may well contravene human rights legislation. You can read more about the story here. Readers may think I am somewhat eccentric in my cynicism regarding data privacy, but the main issue is that once it is published online, you cannot put the genie back in the bottle. The Wikileaks scandal threw the vulnerability of confidential data into sharp relief.
The video clip this week is a short excerpt from the forthcoming "Alien" prequel, called "Prometheus" - it is not a trailer as such; it is actual footage from the film, showing the eponymous spaceship the Prometheus landing for the first time on alien planet LV-426.  Watch and let me know what you think.
Posted by Hugh at 6:10 pm