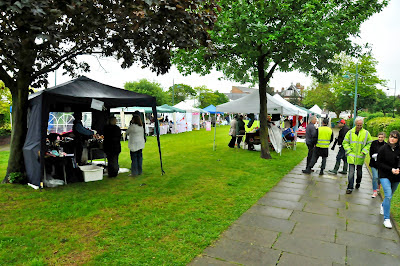 The photo above shows the Erith Riverside Festival, taken this morning. Unfortunately due to the horrendous weather, the event was a bit of a wash out; a real pity, especially after the hard work and sterling efforts of all of the volunteers who took part. In previous years the event has been a massive success - let's just hope the weather is better for next year. Many organisations saw the nasty forecast and cancelled their stands and did not bother to attend; a real pity, but somewhat understandable under the circumstances. 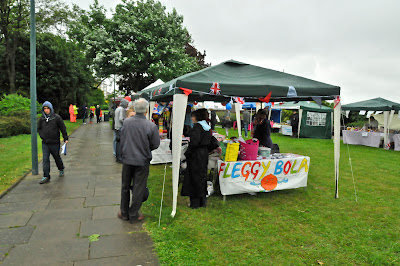 As the date of the start of the Olympics draws ever closer, the doubts about the public transport provision continue. Darryl of the excellent 853 blog recounts problems encountered on the Jubilee Line recently.  The overland train service on the Dartford to London via Greenwich line has not been inspiring; bearing in mind this will be one of the main ways to get to Olympic events in Woolwich and Greenwich, and to interchange at Woolwich Arsenal for the DLR to Stratford for the main stadium, the preparation for the games has seemingly been minimal. I was waiting at Greenwich for a train back to Erith last week; there were hundreds of people on the platform, some of whom had been there for over an hour. I overheard conversations in which commuters had not received any communication from South Eastern trains, despite it being pretty obvious that there had been some kind of serious failure. I saw two people go up to the information point and press the button to speak to someone in the rail control room for an update. Neither person got a reply at all – it seemed that the contact / information points were being ignored. Worrying, as they are also used to report crimes, or rail related incidents. On Monday morning the enquiry point at Erith Station was emitting a loud electronic screech; this was not the anti tamper alarm – I have heard that before and the sound was completely different, like audio feedback. It was so loud the people were covering their ears as they passed the unit. All this kind of thing does not inspire one with confidence. I am fortunate that my day job is one where I can work remotely quite easily. Physically not being in the office is not much of a problem for me, so I plan on working from home for the duration of the games. I realise that others are not so fortunate.
Now that the weather has become somewhat more seasonal of late, the annual Erith strip off is well under way. Every year it is the same; as soon as the first rays of sunshine appear over the town the hordes of local low lives and assorted ne’er do wells strip their tracksuit tops and T-shirts off to reveal their sickly white and tattooed torsos. Over the next few days many of the idiots proceed to suffer sunburn as they inevitably don’t use sun cream, and they end up looking like walking saveloy sausages. They just never seem to learn. Another thing which really annoys me, which I have written about in the past, but which I think deserves a new airing is people who put their feet on the seats on trains and buses. Not only is it antisocial and damaging to the seat material, it is also seriously unhygienic. Dog mess and other nasties has a habit of collecting in the cleats on the sole of footwear; bacteria thus gets transferred onto the seat, and thus onto the clothing of the subsequent unfortunates who then sit in the same place. Many unexplained upset stomachs and other infections can be blamed directly as a result of feet on seats. I just detest this self centred and unthinking behaviour.

The London Evening Standard have (finally) picked up on the story about the wreck of the Richard Montgomery (digital high resolution sonar image above) that I originally wrote about here on the Maggot Sandwich, way back at the end of January. The Richard Montgomery was an American cargo ship that sank at the mouth of the River Medway back in 1944. The ship was stuffed to the gills with all sorts of high explosives and sank after going adrift and breaking its’ back. Some of the explosives were successfully removed at the time, but the rest was judged as too unstable and dangerous to touch. The ship has been in a seclusion zone ever since The masts can still be seen poking out of the water, and at low tides the uppermost portion of the hull can occasionally be seen; the water is very shallow at this point. It has been estimated that if the explosives detonated, the blast would create a column of water 1,000 feet across and 10,000 feet high, and most Windows in the town of Sheerness would be shattered. Basically the effect of a low yield nuclear weapon. The idea of creating London’s third airport within close proximity of this hazard beggars belief, as the Standard highlighted this week, and I have been banging on about for months. I have been in very close proximity with the wreck in the past, as I previously wrote in this posting. The other problem of potentially locating an airport amidst marshland is the huge amount of bird life in the area – just what you don’t need with jet engined aircraft in the vicinity. A bird strike can be fatal to a turbojet engine, and indeed the plane it is connected to.

Breaking news from those nice people at The Chap; not only has their website had a rather fine makeover, but they have a scoop of a story. As I have often recounted, every year they hold The Chap Olympics in Grosvenor Square, as a kind of ironic "anti Olympics". This year things have got much bigger, and even stranger. Here is a direct quotation from their revamped website "In a surprising, not to say flattering, turn of events, The Chap has been asked to stage our eccentric Olympiad within the very grounds of the proper Olympic stadium. Clearly realising that the real crowd puller to the Stratford Stadium would be, not boring old athletics, gymnastics and muscular people in Lycra, but wan, foppish gentlemen in tweed, trilbies and brogues stumbling their way through Hop Skip and G&T and Cucumber Sandwich Discus, the British Olympic Committee approached this humble publication to request some of our top athletes. On Sunday 29th July, Friday 3rd and Saturday 4th August, ten of our finest-dressed, inappropriately trained and frankly weak at the knees Olympians will be representing The Chap in the Olympic Park. They will be demonstrating the above mentioned events, as well as the Pipeathlon, Moustache Wrestling and Butler Baiting. We thought Shouting at Foreigners was unnecessary, as the security guards will be doing plenty of that themselves, when they find some hapless Spanish student has tried to bring a bottle of fizzy pop into the Stadium".


In the spirit of this, here is a clip featuring Mister B the gentleman rhymer, with his musical ditty, "All Hail the Chap".