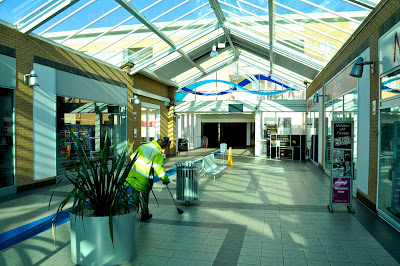 Sometimes I get the distinct feeling that my powers of prediction are rather better than they really should be. As you may well know, the days of me sitting down at my computer on Sunday afternoon to write the latest update to the Maggot Sandwich are long gone. The amount of research, and the sheer work involved putting together a weekly update that averages 2,800 words, means that I now start the next entry within hours of the previous one being published. By Monday evening, it is not uncommon for me to already have around a thousand words written for the next entry. The down side of this, is that sometimes my musings can be overtaken by events. On Monday evening I wrote that I thought that Blockbuster, who have a large store in Erith, would be one of the next retailers to go broke. By Wednesday afternoon my prediction was proved correct rather more quickly than I anticipated. More on this shortly.

There has been a lot of fuss in the press this week about horse meat being found in cheap and nasty burgers from Tesco, Aldi and a few other high street outlets. Personally I don't have a problem with eating horse - I have done in the past, and it it not very dissimilar to lean steak; I have also eaten Ostrich (very tasty indeed - like a cross between turkey and fillet steak) and Wildebeest (not very nice - it tastes like the smell of new leather) I fail to see what the problem is. Teresa May was quoted in the week, saying that "this was an issue of concern to all consumers" - not to me it isn't - I shop at Waitrose.

I have come to the conclusion that Matalan in Erith Riverside Shopping Centre only sells garments in Small, Medium, or Extra Extra Extra Large. I can never find anything in sizes to fit me, whatever it is that I am looking for.  I have heard the same complaint from others; it strikes me that if they don’t give more attention to both stocking levels and customer service (Matalan never seem to have any staff, other than on one or two tills) they will end up going the way of HMV, who famously went bust last week. HMV have been a “zombie company” for quite a while, despite posting record profits only two years ago. To my mind HMV were always an “also ran” in the entertainment media market; they never had the breadth of stock of somewhere like Virgin Records, and they could never offer the keen prices of the long gone and much lamented Our Price Records, a store chain I am sure I am not alone in missing. Digital downloads are only part of the reason for the demise of HMV; until their very recent ruthless price cuts they were always an expensive option. Many people still want a physical recording, rather than a download, but put off by the previous high prices in HMV, they inevitably end up buying from Amazon instead. This change in content purchasing behaviour from a majority of physical purchases now changing to a majority of downloads is set to continue.  Blockbuster famously also bit the dust last week. The American owned chain was the death knell for nearly every independent video store in the early 90’s. You may recall that in the 1980’s, almost every village would have a family run video hire store, stocked to the gunwales with VHS video cassettes. These shops were very successful for a number of years – before the advent of satellite and cable TV, the terrestrial television stations showed very few new movies, except a small handful at Christmas. VHS video machines were incredibly popular at the time, due I suspect at least partly to the lack of movie choice. The independent video hire shops fed this market with a diet of a sprinkling of Hollywood blockbusters, padded out with an incredible number of B movies and low budget direct to video films usually starring Chuck Norris or Cynthia Rothrock (who I suspect was actually a shaved Chuck Norris in a wig, as you never saw the two of them in the same place, a la Batman and Bruce Wayne). Quite often, groups of kids would hang around the shops, playing arcade games and waiting for one of the scarce copies of the premium movies to be returned by the previous renter - there would often be a scrum to get to the counter to snatch this precious cassette and bag the rights to take it home for the evening. Happy days. All this came to an end when big hitter Blockbuster arrived across the pond from the USA, building large stores on the edge of towns where you got free parking and discounts on multiple film hires – they were even fairly flexible about returning movies. The downfall also coincided with the advent of DVD. Many family run video hire shops could not afford the overheads of restocking with the (then) very expensive DVD format, and quietly closed up. Blockbuster effectively became the only significant player on the block, a position it has held until relatively recently. Now it has been being assailed by the likes of Netflix and Lovefilm. Blockbuster launched its’ own online movie rental service, but it did not seem to have made much difference to its' market traction. Blockbuster had an extensive estate of large and expensive physical stores. The shop in Erith Riverside Shopping Centre was seldom busy, and must have cost a small fortune to run; I doubt it ever made a profit. I feel sorry for those who will lose their jobs in the liquidation, but the whole physical media hire business model has become unsustainable now that fast broadband network access has become ubiquitous and cheap. To mourn for the loss of jobs in the video hire industry is akin to mourning the loss of lamplighter jobs in the late Edwardian era – it is something inevitable now that technology has changed, and business practices are forced to change to accommodate it.  Better to get out before the physical hire market collapses completely, and to get into another line of work. It is going to happen, it is merely a question of how long before the business finally goes down the tubes. Now that Blockbuster have crashed, there is little left for physical media hire. We are most definitely seeing the end of an era.

Blog comments, like buses seem thin on the ground, then suddenly a bunch of them will turn up at once, as was the case following last week’s update regarding the noisome Pizza Hut takeaway in Northumberland Heath. It would seem that I struck somewhat of a chord with certain readers. The unanimous opinion seems to be that Bexley Council Environmental Health Department should automatically shut any food outlet scoring zero stars on the “scores on the doors” points system. Bearing in mind that there are currently fifty such unhygienic establishments in the borough, that would be a lot of enforcement for them to carry out. 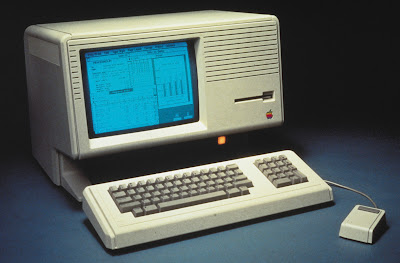 Over the past year or so, I have been reporting on a number of technological anniversaries, and this week is not an exception. It it the 30th anniversary of the launch of the Apple Lisa computer. The Lisa was the first generally available computer to have a Graphical User Interface (GUI). Xerox had produced a couple of earlier models, the Xerox Alto, and the later Xerox Star computers, both of which had a GUI in the mid 1970's. Neither was a commercial product, more of a research project with a limited production run. Apple did licence the desktop analogy and aspects of the overall look and feel from Xerox, which they then developed into the Lisa. The Lisa cost $10,000 in 1983 (an absolute fortune), and to be honest it was a slow and underpowered machine, even by the standards of the day. It is generally regarded that the Lisa was a flop, but it did make Apple $100 million profit, even though relatively few units (100,000) were shipped. The Apple Macintosh was developed in tandem with the Lisa (in fact, most of the original Mac software was developed on Lisas). What the Lisa did do was bring the concept of the GUI to end users and the general public, and completely shape the face of modern computing like no other single product. Apple Lisas are now exceedingly rare indeed. There is a complete, fully working one in mint condition on EBay right now - and look at the price of it! You can read more about the Lisa by clicking here. The video below is a very rare American TV commercial for  the Lisa; it features a very young "before they were famous" Kevin Costner as the Lisa using businessman. Those of you with very long memories may recall I featured this clip about four years ago, but I feel that it could to with a a swift re-showing, just for the cheesy eighties feel of it.

Word reaches Pewty Acres that E4 have given the green light to the producers of sci fi comedy series "Misfits" for a fifth season of the show. I suspect that this may well be the final season, as many of the locations that are key to the look and feel of the show are shortly to be demolished. "Misfits" is filmed in and around Thamesmead, principally at Tavy Bridge and Southmere Lake Community Centre. Much of the area is being redeveloped, and the current, late 60's brutalist concrete architecture which features so heavily in the show will be no more.

A story that seems to have thus far got under the radar of most local news outlets is that the owners of the famous, and now decommissioned cruise liner the Queen Elizabeth II are hoping to be allowed to permanently moor the vessel at Carlsberg Wharf, directly opposite the O2 Arena on the  banks of the River Thames. They want to convert the ship into a luxury floating hotel with 550 cabins, seven international restaurants and a cinema. If the plans get approved (and Boris is backing it) the ship would employ a crew of around 1,500 people, bringing permanent jobs to what is an otherwise economically depressed area. It would also add a touch of glamour to Greenwich Peninsular – not the most aesthetically pleasing place at present. Bearing in mind the cruise liners and gigantic luxury super yachts that filled the South Quay in Canary Wharf at the time of the Olympics (click here to see my photos) I think that this project could well be a winner. The QEII is currently moored in storage in Dubai; whilst the work to convert her into a floating hotel would be extensive, I think that the kind of publicity the project would bring to the region could only be a positive thing. I am sure the novelty of a luxurious floating hotel would add a sparkle of glamour to a part of South East London that could surely use it. If the project does not take off, there is a strong possibility that the QEII would be scrapped. Not a pleasant demise for what is one of the World’s best known passenger ships.

Erith Model Railway Society have their annual exhibition at the Bexley Business Academy in Yarnton Way, Thamesmead on the 26th and 27th of January. Over eighty stands and twenty five different model railway layouts will be featured. The entry price will be £6 for adults, £5 for concessions and £3 per child. You can read more about the exhibition by clicking here. You can see some HD footage of last years exhibition in the video below. It certainly looks like a hell of a lot of work goes into the event; I wish them well. Comments below, as always.