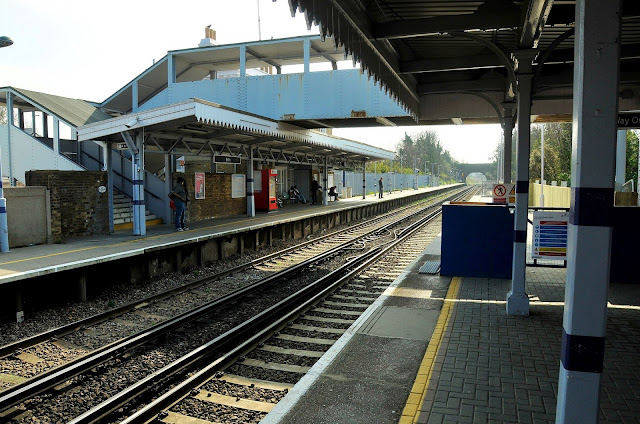 With the construction programme now well under way on the new Bexley College campus in Walnut Tree Road, focus has once again fallen on South Eastern Trains and their lack of provision of a lift or other step free access to the London bound platform at Erith Station. At present, the only method of getting onto the London bound platform is via an ancient and very steep wrought iron footbridge as seen in the photo above (click for a larger view), which is functionally unusable by anyone with a baby buggy or who has to use a wheelchair. Local MP Teresa Pearce started an online campaign to try and get South Eastern to do something about this, but their bland reply was that anyone needing to use the London bound platform should get on a Kent bound train on the platform adjacent to the ticket office, to travel three stops in the opposite direction to Dartford Station, use the lift there to change platforms to pick up a London bound train, then travel back through Erith towards London. Aside from any additional expense and inconvenience that this would cause to someone, there is the matter that even if you managed to get a quick connection at Dartford, it would still add at least thirty minutes to the journey time. This clearly discriminates against travellers with a buggy or using a wheelchair. I know that many locals feel strongly about this issue, but the rail company just don’t seem to want to do anything about it – probably due to the expense. The fact that they are almost certainly in direct breach of the Disability Rights Act seems to completely pass them by. You can join the ongoing campaign on the Fix My Transport website here. 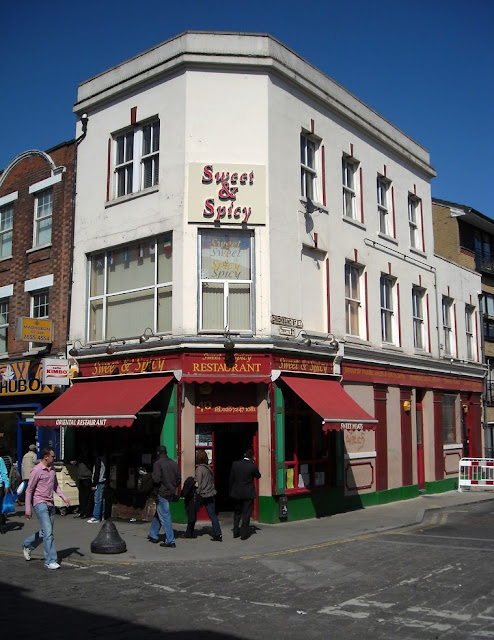 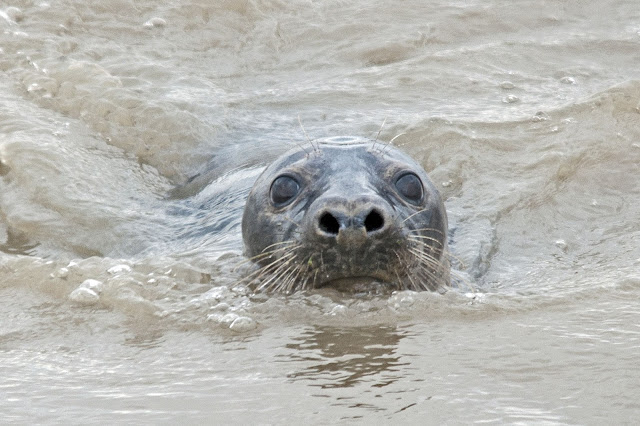 The photo above was taken earlier this week by regular Maggot Sandwich readers Dawn and Richard of a seal swimming in the River Thames at the Crossness Outfall in Thamesmead. Seals will not swim in polluted water - their presence is a very good indicator of the health of the river water, so seeing them locally is a very welcome thing. People look at the greenish - grey colour of much of the lower Thames and assume that it is still terribly polluted, as it indeed used to be; in fact the colouration is mainly due to the large amount of silt and other natural particulates that are held in suspension by the water. Ironically these are good news for much of the wildlife that lives in or on the river - lot of nutrients eaten by small bugs, larvae and other creatures at the bottom end of the food chain, which in turn get eaten by the fish, and then the fish get eaten by the top end predators like the seal in the photo above. Dawn and Richard tell me that the Crossness Outfall is an excellent spot for nature viewing. I may well take my camera along there soon and see for myself. You can see some photos taken by a local bird watcher here.

The compact cassette has its’ 50th birthday this month. Whilst now a dying, (if not quite truly dead) breed, the cassette did as much in the 70’s and 80’s to spread and popularise music as the 45rpm single did in the 1960’s. The cassette format was developed and patented by Philips, and the European launch of the cassette took place at the Berlin Radio Show in August 1963. To be honest, the early cassette recorders were pretty dire – the format was originally created to be used for voice recording and other dictation type duties. It was only later when Sony and Nakamichi (a specialist Japanese electronics company that made the Dragon – the ultimate audiophile cassette player / recorder) became involved in created much higher quality read / write heads and far greater precision tape transport mechanisms that the format started to get used for high fidelity recording and playback. The “killer app” for the compact cassette was the invention of the Sony Walkman in 1979 when music could be enjoyed on the move by an individual for the first time. It is hard to credit now the impact the invention of the Walkman had at the time – I recall saving up for ages to be able to afford the Sony WM-10 Walkman, which was actually physically smaller than the size of a cassette box, and expanded to take a cassette. It was an amazing bit of precision engineering; back in the early to mid 1980’s Sony really were on a roll – their portable cassette decks and radio kit was exceptionally good. I still have my Sony ICF 2001D receiver in good working order – a portable shortwave communications receiver that has not been bettered to this day. The model had such a good reputation that the BBC issued it as standard equipment to all of their foreign correspondents for many years. Mine sits on my bedside cabinet, acting as a alarm clock / radio, and means I can lay in bed listening to the broadcasts of shortwave stations like Laser Hot Hits on 4.026 MHz.

On Monday afternoon I popped into Morrison’s to pick up something for my dinner. As I picked up a hand basket, I noticed a chap giving me what I term “the Look”. The Look is a combination of curiosity, surprise and recognition – and is nearly always when a Maggot Sandwich reader has twigged that yours truly has made an appearance. It was indeed the case on this occasion; I had a very pleasant chat with the gentleman, who has been a reader for a couple of years. It is always nice to get feedback from readers. I am aware that there have been some intermittent problems with the comments function on the Maggot Sandwich – sometimes a comments box appears, and other times not. The behaviour is intermittent, but would seem to be more common when viewing the site with Google Chrome (which is curious – one would have thought any rendering issues would be more likely with a non Google browser). There is also a bug which shows the location of the posting as “undefined” when in fact the location is correctly set as Erith. Both of these issues I need to log with Google’s Blogger support. I think both issues are problems with the Blogger template that I use.  Hopefully I will be able to get both resolved before too long, as both problems are annoying, if not actual show - stoppers.

Talking of Google Chrome, sales figures for the first half of this year are now in, and the biggest surprise has been that sales of Google’s Chromebook laptops have greatly exceeded expectation . On both Amazon US and Amazon UK, Chromebook sales have dominated the under £300 laptop sector. Fears that buyers would return the machine once they discovered it only ran a web browser, rather than being a fully featured laptop have been unfounded. Users spend 95% of their time on the web – social media, Email, and even relatively demanding tasks such as photo editing can all be done online via the browser, and video is supplied by sites such as BBC iPlayer and YouTube. I think that most users would find the Chromebook an ideal second computer – I certainly do, and would not be without it. A real bargain at £229, and well worth a go if you are curious.

If you ask most locals what the oldest building in Erith is, they don’t have a clue. This is understandable, since nearly all of the original, Victorian town was butchered when the hideous concrete shopping centre was constructed in 1966 to 1973, leaving only the High Street in a conservation area, and relatively untouched. The oldest building is actually the Post Office. The structure was originally built as a stables and livery store in the 17th Century – if you look at the roof of the structure from a high point such as the steps leading into the Erith Riverside Shopping Centre opposite, you can see the ancient design of the gabled roof. Actually the Post Office takes up less than half of the building. The rest is occupied by long established local sign making company WDS Signs, whose website you can see by clicking here. The history of Erith was obliquely referenced yesterday morning in a BBC Radio 4 documentary presented by Steve Punt about a chap called William Cantelo, who allegedly was the original inventor of the recoil operated machine gun. Cantelo was a Southampton pub landlord whose experiments in the cellar of his pub often caused consternation to both his regulars and his neighbours. Once he was confident that his machine gun was ready for the world, he packed several prototypes up and went off to market the weapon. That was the last anyone ever saw of him. Not long afterwards, Erith's won Hiram Maxim (born in America, but a naturalised Briton) started producing his range of Maxim Guns - touted as the first recoil operated machine gun, which were made at his large factory in Fraser Road, Erith - to this day the area is known locally as "The Pom Pom" - after the noise of the guns being tested made. Investigators have noticed that Cantelo and Maxim looked remarkably similar - and certain conspiracy theorists have had a field day in supposing what the connection between the two men was. The thing is, back in the late Edwardian period, most men over the age of thirty had large bushy beards - as did both Cantelo and Maxim, and a lot of their physical similarity would seem to be due to the beard element. Later, Hiram Maxim claimed that he had a double who was impersonating him, but this was never independently confirmed (Maxim was fond of making sweeping statements, so this was nothing remarkable or at all unusual). Anyway, UK residents can listen to the radio programme investigating the very strange case by visiting the BBC iPlayer website here. It is a fascinating story that I was unaware of, though as long - term Maggot Sandwich readers will recall, I have written at length about Hiram Maxim in the past, listing some of his less well known inventions (the spring loaded mouse trap, for one) and his semi successful attempt at heavier than air flight which took place in Danson Park five years before the Wright Brothers claimed the record for themselves. Listen to the excellent documentary and then decide for yourself.

The ending video this week is something of a curiosity. It is the first episode from a BBC2 situation comedy starring George Cole, called "Comrade Dad" from back in 1983. Personally I don't remember it at all, but when mentioning it to a couple of friends, they do dimly recall it. "Comrade Dad" is basically a version of George Orwell's "1984" but with laughs. The premise of the show is that Britain in 1999 has been invaded by the Russians, and is now under Communist rule. George Cole plays the everyman head of a London family trying to make their way through the layers of socialist bureaucracy and petty rules, whilst trying to remain true to his communist beliefs, despite the clear evidence that Communism does not work. It is actually quite good, and I am surprised that they only made one series of it. This clip shows the first ten minutes of the pilot episode. When this was uploaded, you could only upload a maximum of a ten minute video to YouTube; if you want to see the rest of the episode, you will need to click here and here. Enjoy. Please feel free to leave a comment below.
Posted by Hugh at 4:19 pm