The scene above will be familiar to most people now; I took the photo whilst queuing outside of Morrison's in Erith one evening last week. Whilst I have heard a few grumbles about the enforced isolation and social separation, most people seem to be taking the new rules and precautions well.  In my experience, the queue moves quite quickly, and only adds a few minutes to the shopping experience. The queue looks long, as people are spacing themselves two metres from each other, but it also moves quickly as a result. On one occasion whilst queuing, an individual jumped over the crowd control barrier and joined the queue in front of me. Before I could say anything, the store security guard intervened - the interloper was removed after some altercation and shouting. I think this was the exception; generally people in the queue are considerate and patient. What do you think? Share your personal experiences with me by Emailing me at hugh.neal@gmail.com. 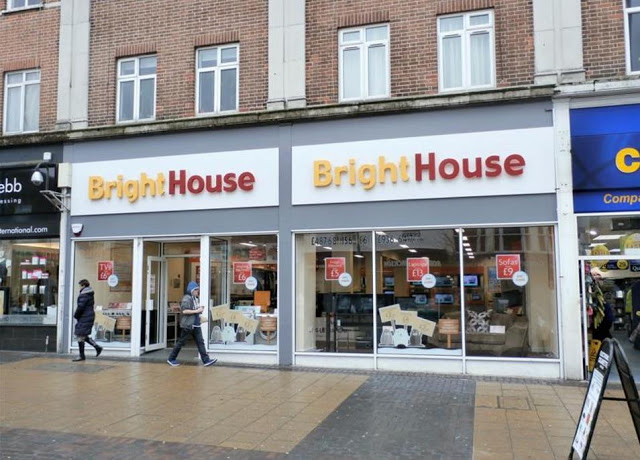 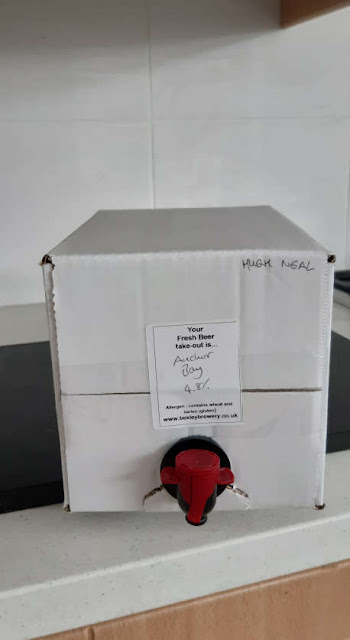 Local businesses are working on ways to service their customers whilst they are on lock down. The excellent Bexley Brewery have just started a home delivery service. You can join their Email list by contacting shop@bexleybrewery.co.uk  They comment:- "We'll be sending out our new beer and cider list every Monday, so please look out for it. If you don't see an email from us in your in box, please check your junk/spam folder as your server/spam guard may be sensitive to attachments, if there's still nothing there, please drop me an email and let me know. As we did this week, we'll be taking orders on Monday, Tuesday & Wednesday, with last orders being Wednesday 12 midday (we have to be very prompt on this). We then start to workout delivery routes and organise the orders ready to deliver from Wednesday afternoon onwards". Another local organisation that is changing to accommodate the quarantine situation is The Bookstore Cafe, which has had to close to visitors. Instead they are also offering a delivery service. Their announcement reads:- "Get The Bookstore straight to your door with our Oven Ready Meal offer. Choose from a selection of meals including pies, curries and hot pots, all for £5 including delivery. Deliveries are made on Fridays. So please let us know what you are after by Thursday 9am. To place an order, follow this link, or give us a call on 01322 341144. We are offering Orbit residents our individual oven ready meals for £2.50, including delivery. Home cooked nutritious affordable ready meals made with the best ingredients by the best local chefs. To find out more, follow this link or give us a call on 01322 341144". Head Chef Louisa Budds is sharing some of her recipes. Download the recipe here, and watch the how-to video below.


Now that a large majority of the UK are working from home, it has become apparent that some of the tools that many use to keep in touch with family and friends - and not to mention work, have come under scrutiny. I don't know if you saw Prime Minister Boris Johnson early last week, when on Tuesday when he shared a screenshot of “the first ever digital Cabinet” on his Twitter feed. It revealed the country’s most senior officials and ministers were using the popular video conferencing application Zoom to discuss critical issues facing the UK. The use of the Zoom software is likely to have infuriated the security services, while also raising questions about whether the UK government has its own secure video-conferencing facilities. The decision to use Zoom, as millions of others stuck at home during the Coronavirus outbreak are doing, comes as concerns are growing about the conferencing app's business model and security practices. Most notably, the company has been forced to admit that although it explicitly gives users the option to hold an “end-to-end encrypted” conversation and touts end-to-end encryption as a key feature of its service, in fact it offers no such thing. Specifically, it uses TLS, which underpins HTTPS (secure) website connections and is significantly better than nothing. But it most definitely is not end-to-end encryption (E2E). E2E ensures all communications are encrypted between devices so that not even the organisation hosting the service has access to the contents of the connection. With TLS, Zoom can intercept and decrypt video chats and other data. Whilst this might not matter for social calls between friends and family, when big corporations, or indeed governments become involved, it is a whole different issue. Despite Zoom offering a meeting host the option to “enable an end-to-end (E2E) encrypted meeting,” and providing a green padlock that claims “Zoom is using an end to end encrypted connection,” it appears that the company is able to access data in transit along that connection, and can also be compelled to provide it to governments. So, it's not E2E. While that is not something that will bother most Zoom users, whose conversations are not highly sensitive nor confidential, for something like a UK Cabinet meeting, the lack of true end-to-end encryption is dangerous. Personal information gathered by the company included, but was not limited to, names, addresses and any other identifying data, job titles and employers, Facebook profiles, and device specifications. It also included "the content contained in cloud recordings, and instant messages, files, whiteboards ... shared while using the service." In other words, it was, arguably, the Facebook of the video-conferencing world, sucking every piece of data it can from you and any device you install it on. Speaking of Facebook, Zoom's iOS app sent analytics data to Facebook even if you didn't use Facebook to sign into Zoom, due to the application's use of the social network's Graph application programming interface. In short, while Zoom’s ease of use, reliability and excellent user interface has made it a godsend for people stuck at home, the company continues to raise red flags about its honesty, its privacy policies and its business model. 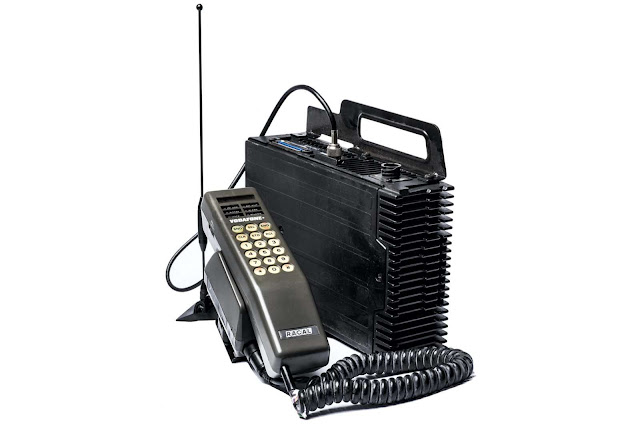 This month marks the 35th anniversary of the first UK cellular telephones going on sale to the general public. The official launch was on the first of January 1985, but for the first few months, phones were almost exclusively sold to corporations and large businesses. It was only at the beginning of April 1985 that the general public could - for a price - buy a transportable phone, such as the model shown above - click on the image for a larger view. The companies we know as Vodafone and O2 today were Racal-Vodafone and Securicor-Cellnet back then; phones were the size of a small suitcase and only did voice calls - no text or apps, let alone any kind of camera or GPS. The two companies had spent the months up to the 1st January launch deadline fighting for cell sites and testing coverage, particularly in London. There was no hint of site-sharing. The services used analogue TACS (Total Access Control System), and later ETACS (Enhanced TACS), as more frequencies became necessary. The analogue calls could easily be monitored using a radio scanner - as in the infamous Princess Diana "Squidgygate" tapes. The cellular service was not actually the first mobile phone system available - there was a Carphone Radio service called Band 3, but that was push-to-talk and all calls had to go through an operator to be connected. Calls were limited as was the number of users. You had to go on a waiting list and wait for a subscriber to close an account before you could buy one. It was complex, limited in coverage and extremely expensive. The first modern, cellular call was undertaken by Vodafone's Michael Harrison, the son of former Vodafone Chairman Sir Ernest Harrison, who was the first to test the system, calling his father at midnight on 1st January, 1985. Michael Harrison secretly left his family’s New Year’s Eve party at their home in Surrey in the UK to surprise his father, calling him from London’s Parliament Square. Harrison made the historic call from one of the first mobile devices – a Transportable Vodafone VT1, which weighed 11lb (5kg) and had around 30 minutes of talk time - more on this groundbreaking device in a bit. Harrison recalls that the line was crystal clear, although the excited shouting of New Year’s Eve revellers in London created considerable background noise. As Sir Ernest Harrison answered the phone, Michael said: “Hi Dad. It’s Mike. This is the first-ever call made on a UK commercial mobile network”. Which isn't quite “one small step” but is better than, “Watson come here I want to see you". The official press launch was held days later at St Katherine’s Dock in London where Vodafone had hired comedian Ernie Wise make the first public mobile phone call. Wise brought the same transportable device to St Katherine’s Dock in London in a 19th century mail coach, using one of the oldest forms of communications – sending a letter – to highlight the speed and convenience of these new mobile phones. Ernie Wise’s call was received at the original Vodafone headquarters, where a handful of employees were based in an office above an Indian restaurant in Newbury, Berkshire. Heavy and cumbersome, the first generation of mobile phones were sold in the UK from 1984 – before the first products were even available and before the network was officially live. Such was the demand for a fully portable, cellular phone that more than two thousand orders had been taken by the Vodafone sales team before Michael Harrison made his call from Parliament Square. By the end of 1985, over twelve thousand devices had been sold. Very soon afterwards a good friend of mine got given a VT1 portable TACS phone by his then employer, British Telecom. The phone was so powerful that when he made trips to the Carrefour Hypermarket in Calais, he could call his Mum to find out what she wanted him to buy, connecting via the British mobile phone cell in Dover (there was no international mobile roaming back in those days). 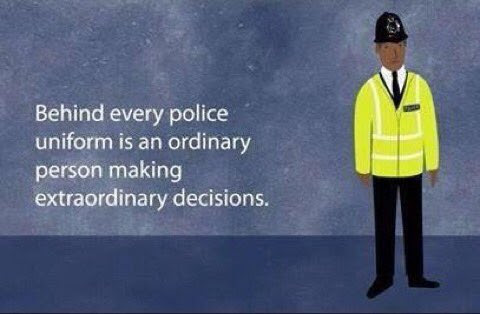 The end video this week may well be of particular interest to drinkers of bottled water. It features the story of the ill - fated Dasani brand of bottled water, which got the unfortunate nickname of "Sidcup Spring". Give it a watch and send any comments to hugh.neal@gmail.com.