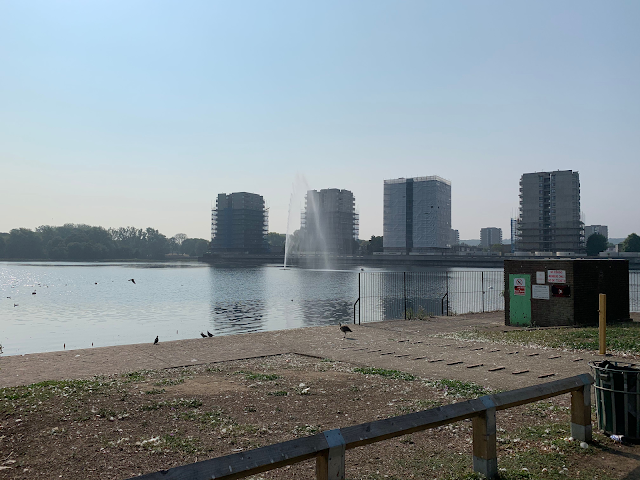 The photo above - click on it for a larger version - was taken by regular reader and occasional contributor Miles. The photo shows Southmere Lake in Thamesmead during the height of the recent heatwave. Local temperatures reached 40.2 degrees Celsius in Lower Belvedere on Tuesday afternoon.

With the recent spate of extremely hot weather, the authorities have been very keen to ensure the everyone carries a bottle of water when out and about; I understand the thoughts behind this - dehydration can become a serious matter when temperatures exceed thirty degrees Celsius. One aspect that seems to have been overlooked, however is that of what I term as "wee mileage". Wee mileage is a concept I developed back in November 2009; I expounded it at the time, but perhaps it deserves a revisit. It encompasses irregular and unreliable public transport, the woeful lack of public toilets in this country nowadays, and the propensity which many have for going out for a quiet pint on the odd occasion. The aforementioned factors create an artificial boundary as to how far one can travel from home, if intending to indulge in a tipple whilst out and about. Once you have left the hostelry or beer festival at the end of the evening (in those halcyon pre - lockdown times), there is a finite amount of time available for travelling before one will be compelled to pump ones' bilges. Obviously this will vary between individuals and their personal bladder capacity / ability to hold on, the amount of liquid they have imbibed, and the ambient air temperature.  I am presupposing that one does not cheat and avail oneself of a convenient bush or dark alley. Wee mileages seem to be higher when employing a cab, mainly due to the fact one can take a last minute leak before starting the journey, and the cab will take you door to door with no waiting around at a chilly bus stop or draughty railway platform with the bladder clock ticking. This is the principal reason that I have never attended the CAMRA Great British Beer Festival at Olympia (cancelled this year, and replaced with a virtual event - as so many public events have been). The exhibition hall is admirably equipped with public conveniences, but once you leave the venue and head back to civilisation from West London the trouble starts. One would have to navigate the tube back to Charing Cross Station (it is possible to make a loo visit there - they used to have the temerity to charge a fee, but now I understand that they are now free to use). After this it is fifty minutes overland by train to Erith Station, in a train that has a loo - but that is almost always locked and out of use to stop vandalism. Just too much to endure - and thus far too high a wee mileage for me to even consider. A similar restriction occurs when taking bottles of water whilst out and about in hot weather - people guzzle water, then find that there are few if any loos around. What do you think? Leave a comment below, or alternatively Email me at hugh.neal@gmail.com. 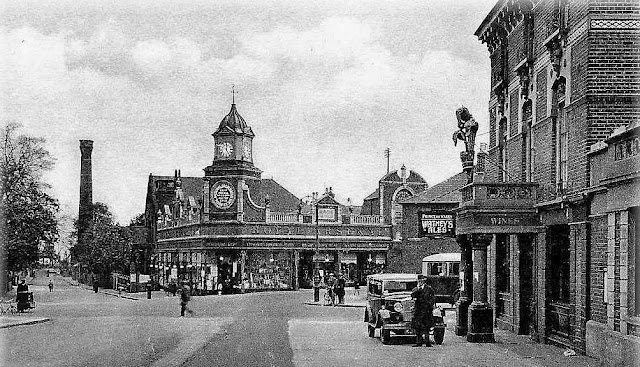 Above you can see two photos which show part of Erith in a "then and now" way. The upper photo was taken in around 1935, and shows James Watt Way looking North; To the right of the photo can be seen The Prince of Wales pub, and ahead is the Royal Arsenal Co-Operative Society shop, on the corner of Manor Road. Just out of the shot, to the left would have been the construction site for the forthcoming Odeon Cinema, which opened in 1937. You can see some period photos of the cinema by clicking here. In the lower photo, you can see the McDonald's drive through burger bar where the pub once stood, and in place of the RACS shop, there is now a KFC fried chicken drive through. To the left, on the site of the Odeon Cinema (demolished in 1999) is a block of flats with offices and the new, faceless Erith Library on the ground floor.  I think pretty much anyone who has spent time living in or around Erith is of the opinion that the old Victorian town centre should never have been demolished. If it was still in place now, the town would be a significant tourist attraction - I would have likened it to "Whitstable on the Thames".

Frances Allen, one of the leading computer scientists of her generation and a pioneer of women in technology, died last Tuesday, on her 88th birthday. Allen is best known for her work on compiler organisation and optimisation algorithms. Together with renowned computer scientist John Cocke, she published a series of landmark papers in the late '60s and '70s that helped to lay the groundwork for modern programming. In recognition of her efforts, in 2006 Allen became the first woman to be awarded The Alan Turing Award, often called the Nobel Prize of computing. After earning her masters degree in mathematics from the University of Michigan in 1957, Allen took a job at IBM in Poughkeepsie, New York. She planned to stay only until she paid off her college debt, but ended up staying at the company for 45 years. Her first major project was on the National Security Agency’s Stretch-Harvest project, which aimed to build a supercomputer capable of analysing communications intercepted by American spies around the globe. In later years, she applied similar ideas to "parallel computer", which aimed to use groups of low-cost, high-performance microprocessors to share the processing of smaller tasks in parallel. This process would go on to become an everyday part of most computers, and is a technique now used by companies like Google and Facebook. In 1989, Allen became the first female IBM Fellow, a rare award bestowed on the company's leading engineers, scientists, and programmers. The award mistakenly referred to her as a man - "In recognition and appreciation of his outstanding technical contributions." The award, including the mistake, remained on her office wall until she retired in 2002. Allen died of Alzheimer's disease at a nursing home in Schenectady, New York. 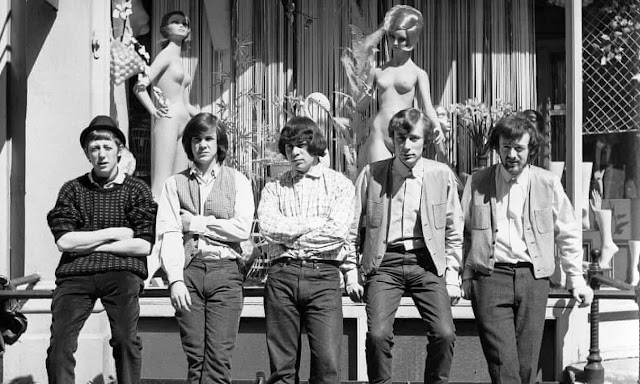 The end video this week is of the aforementioned The Pretty Things, live in concert in Holland in 1965. The band don’t seem to be playing a gig so much as providing the soundtrack to a public disturbance, the music getting more and more chaotic as the crowd fights. So many viewers phoned into complain, the TV company ended up pulling the plug on the concert. Give it a watch and send any comments to me at the usual address - hugh.neal@gmail.com.