The photo above shows the Erith Mural - click on it to see a larger version. It is located next to the Kassiopi Cove children's soft play centre (what used to be the Blockbuster video hire store some years ago) in Erith Riverside Shopping Centre in Colebrook Street. The mural has nine panels depicting scenes inspired by the history of Erith, including the murder of Thomas A Beckett and the reign of Henry the VIII. The mural was designed and built by the artist William Mitchell in 1968. The mural is constructed using an artistic technique called "Cloisonne" - which is similar to the production of stained glass windows. The mural was originally located on the side wall of the old Riverside Swimming Pool in Erith High Street, but was moved to its current location in the centre of the town just before the old pool site was demolished, and flats built.

I think pretty much everyone in the UK gets a lot of unsolicited mail through their letter boxes. It seems to be a curse of modern life. I have whinged at length about this at length in the past, and I am not going to repeat myself now. The worst part of the problem seems to be what is called “letter box stuffing” – the posting of advertising flyers and leaflets through the door from dedicated delivery people. In the last week I have had a handful of leaflets advertising take – away pizzas and kebabs. There is nothing unusual with this, but the problem is, they are for food outlets in Dartford; one is even from a place in the Brent, which is pretty much halfway to Greenhithe, and according to Google Maps, over six miles from Erith. There is no way that these places would deliver a meal over that kind of distance, and there is no way that any sane person would want to – whatever you did order would be a greasy cold and congealed mess by the time it eventually arrived. Rather than just ranting on about the pointlessness and waste of money on the part of the companies that leaflet places way outside of their catchment area, I have decided to do something positive about it. It just happens that two of the places involved in this practice are part of a franchise. I looked up the website of the parent company in each case, found the contact details, and Emailed a complaint to them. I pointed out that it did not make business sense for their outlets to leaflet areas over six miles away – at least twice the maximum delivery distance quoted on the leaflets themselves. It is either local poor management, or the outlets are employing unscrupulous door to door leaflet delivery agents. 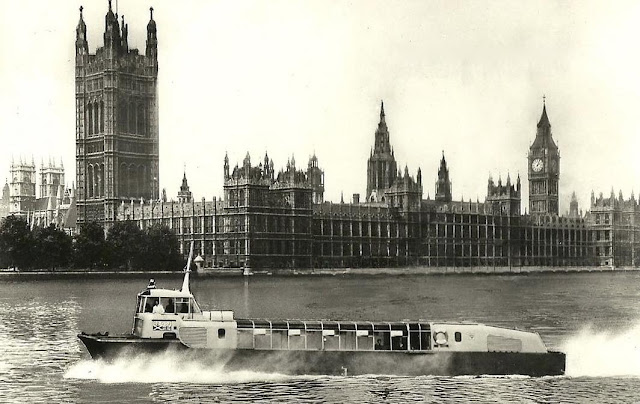 With all of the debate going on at present about improving road and rail connections across the River Thames, It is interesting to see enterprises that instead of viewing the river as a barrier, they use it as a means of transport in itself. Back in 1963, a unique experiment was carried out. A hovercraft ferry service on the Thames was set up. The Denny D2 Hovercraft could carry seventy passengers at speeds of up to 21 knots, and the service was launched in early July 1963. It was operated by Thames Launches, who planned to operate a service every day until that October with a schedule of three trips per hour. The fare was £1 for adults and 10 shillings for children – a very substantial amount by the standards of the time. Built in Dumbarton by Denny Hovercraft - a subsidiary of Denny Ship Buildiing, the company that built the Cutty Sark, the hovercraft travelled under its own power along the east-coast, which was at the time the longest trip ever made by a hovercraft. The hovercraft also required a permit to fly along the Thames, as they were officially classed as aircraft, under the Air Navigation Order 1960. As such, a Times newspaper report into the new service was written by the Aeronautical correspondent, not their shipping one. The first passenger carrying “flight” took place on 1st July, with some five hundred customers on the first day. Initially the hovercraft service was limited to running three trips per hour between Tower Bridge and Westminster, but a series of experimental flights were also made down river, at least one of which was to Anchor Bay, Erith, to the area that is now the site of Erith Construction Ltd’s six and a half acre logistics and materials treatment facility in Manor Road. A key advantage of the hovercraft over conventional ships was that it would race along the Thames at much higher speeds - around 21 Knots, as it caused minimal disturbance to the river as it passed over the water, a problem which limits speeds on the Thames to this day. Sadly, the experiment was a failure, and the builders were forced into bankruptcy the following year. The hovercraft was eventually sold in 1970 to begin life on a new route in the Caribbean linking Kingston, Jamaica, with the island’s Palisadoes Airport. If things had turned out differently, it could have been that Erith residents took the hovercraft to work in the morning. It would have certainly been a somewhat more interesting commute than using Southeastern trains! Talking of trains... 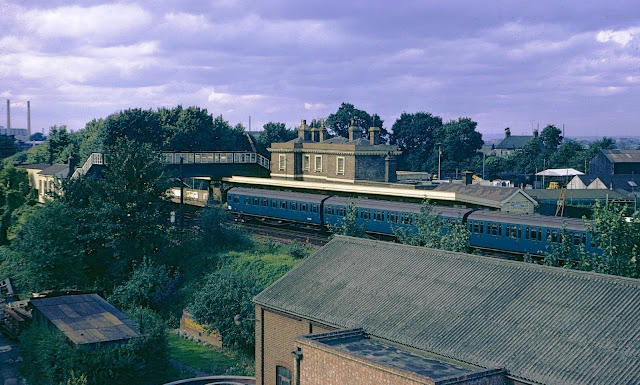 It would seem that sadly, my prediction in respect of Argos in Erith Riverside Shopping Centre appears to have come true. The store has been emptied of stock and equipment, and the signs removed from outside. It will not be re - opening; it will be a great loss for the town.  It had been hoped that after lock  down the store would be able to re-open and continue business, but this would appear to not be the case. I worry that the staff of the popular branch will have difficulty in finding new employment - I have heard nothing to indicate they will be redeployed in other Argos branches. If you have any information regarding this, please contact me in complete confidence to hugh.neal@gmail.com. 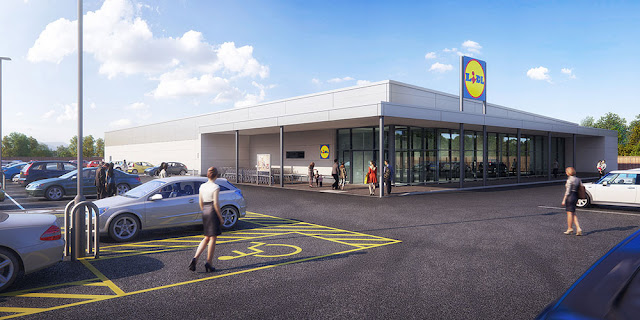 On a possibly more upbeat note, I have reason to believe that things may be happening on the old Atlas Trading Estate site in Fraser Road, Erith. It would appear that Lidl have not given up on their project to build one of their discount supermarkets in Fraser Road, Erith. An artists impression of the originally proposed store is above - click on it to see a larger version. Lidl were refused planning permission for the new store a while back (2019) by Bexley Council. I, along with several other local people have noted that over the last couple of weeks, building surveyors and geological survey operatives have been on the site, conducting the drilling of survey bore holes in several areas of the extensive location. I have reached out to one of the area's local Councillors to get some update on exactly what is happening to the site, which has actually been owned by Lidl for around five years; at the time of writing I have not had a response. It would seem, however that a re - survey has been commissioned. Bearing in mind that at least two of the retail units currently on the site are no longer trading, it would seem that new moves are now afoot. Erith is dominated by Morrison's supermarket - there is no realistic competition - I don't feel that Farm Foods or Iceland offer anything like the full range of goods that Morrison's does. On top of this, the Erith Quarry housing development - next door to the proposed Lidl site has opened, with over four hundred new houses and apartments. This equates to roughly a thousand new people coming to live in the area. over the next year. in early 2019, Lidl carried out an independently audited survey of local residents; the results were overwhelmingly positive. A total of 1,366 people responded to the survey, of which 1,276 local residents supported the construction of a new Lidl store on the former Atlas Trading Estate site. That is a majority of 93.6 percent. If the store does eventually go ahead, it will employ 40 local people; I am led to understand that priority will be given to people who are employed by the outlets currently on the site. The original detailed development proposal lists the following benefits of a new store on the former industrial site:- "Demolition of the Atlas Trade Park and construction of a standalone Lidl food store with associated car parking. Provision of a brand new discount food store (1,375m2 sales area, 806m2 of ancillary space) with 91 free car parking bays of which 2 are for electric vehicles, 6 will be disabled spaces and 8 parent and child spaces. Contemporary food store building using high quality materials. Soft and hard landscaping treatment to be applied to all external areas. A limited range of products (2,000 lines) necessitating continued use of existing local retailers. Provision of up to 40 new jobs for local residents". Following my previous articles on Lidl and their plans to open in Erith, I have had several series of correspondence with readers, which have been overwhelmingly supportive and positive about a Lidl store opening locally. What do you think?
Now for the weekly local safety and security updates from Bexley Borough Neighbourhood Watch Association. Firstly the report from Barnehurst ward:- "On Monday 01/02/2021 between 20:00 and 7.15 on the Tuesday 2/02/2021 unknown suspects have ripped the front grill of an AA patrol van and have also taken two orange beacons. On Monday 1/02/2021 at 17:01 in Hurstwood Avenue, a Catalytic Converter was stolen from a Toyota Prius. Three white males were seen driving a grey Volkswagen Golf with shiny new looking alloy wheels. The vehicle parked up near Quantock Road where the three males wearing face masks have got out and proceeded to walk towards the victim's vehicle and within a few minutes removed the Catalytic Converter. The team were also made aware of a blue Transit Van who was seen driving very slowly up Beverley Road. The two male occupants were seen pointing towards a nearby property. One of the males got out of the vehicle and walked onto a driveway towards a vehicle and the garage. The male was confronted and asked what was he doing. The male replied with an accent, Scrap Dealing. When told to get off the property the male smirked before walking away. On Wednesday 27/02/2021 at 18:45 two males approximately 16 years old attempted to purchase alcohol but were refused after having no ID. The males then walked out of the store without paying and made off in a grey VW Golf. One male had brown curly hair and the other male had short brown hair. In Eastleigh Road victim found the roof of a plastic shed had come off by unknown means and the doors open. It’s believed this was not caused by wind as the roof was held down by a large brick. On Tuesday 2/02/2021 Officers stopped two males in the alley that runs between Hornbeam Lane and Merewood Road. This area has been brought to our attention in the past and Officers have patrolled it at the right time on this occasion. The males were found in possession of Cannabis and were drinking alcohol. Both males were dealt with accordingly". 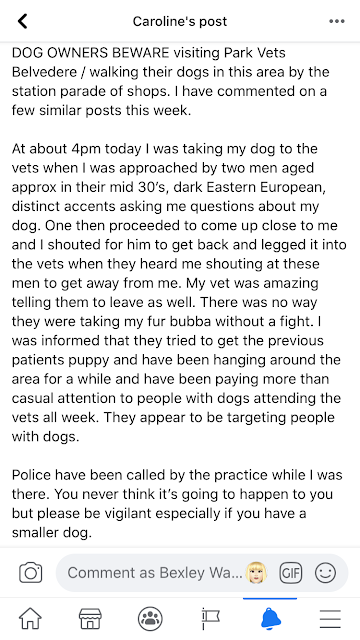