The photo above (click on it to see a larger version) was actually taken by me on an unseasonably warm and sunny day last December. It shows the wooden jetty on the river front by Erith Riverside Gardens. The current jetty dates back to the 1980's, but it was repaired after a ship crashed though it in November of 2016, causing extensive damage. The jetty is used by Erith Rowing Club and emergency services such as the RNLI. It suffers from a number of problems, one of which is the extensive growth of algae and weed on the wooden structure of the jetty, which means that using it can be a slippery and dangerous experience. The structure is also sometimes known as the Pilgrim's Jetty, as a previous incarnation of the jetty was used by the historic Erith to Rainham passenger ferry. The ferry service was first put into action way back in the year 1199, when Erith was a small fishing port. There is a brass plaque on a wall adjacent to the current jetty, which commemorates the 800th anniversary of the ferry service, which was installed back in 1999. There has been an announcement by the Port of London Authority that reads as follows:- "The public causeway at Erith, stretching over 170 metres into the river, is a vital access point for the emergency services and is widely used for recreation and commerce. Recent surveys we undertook show signs of deterioration of the structure. As the owners, we are preparing to install a replacement, retaining the alignment and profile of the existing causeway. Work is expected to start later this year and ahead of this we are interested to hear from causeway users and the local community, on how the project can be best implemented. To comment on this project please email us on ErithCauseway2021@pla.co.uk. This consultation ends on 23rd of April 2021". It will be interesting to see what design the replacement jetty has, and whether any additional features will be added. Time will tell. I have written to the Port of London Authority for additional information, but at the time of going to press, I have not yet had a response.
As regular readers will be aware, I rarely if ever comment on stories in the national news - this is for several reasons; firstly the story will have been covered in detail by "proper" journalists, leaving me with little to add. Secondly, unless the story has a local connection, it is outside of my main remit - which is reporting on issues and events in the Northern part of the London Borough of Bexley. Anyway, a fellow local Blogger - Richard of the excellent "The Thamesmead Grump" has written a highly entertaining and pertinent article on when he met the now late Duke of Edinburgh, which you can read by clicking here. 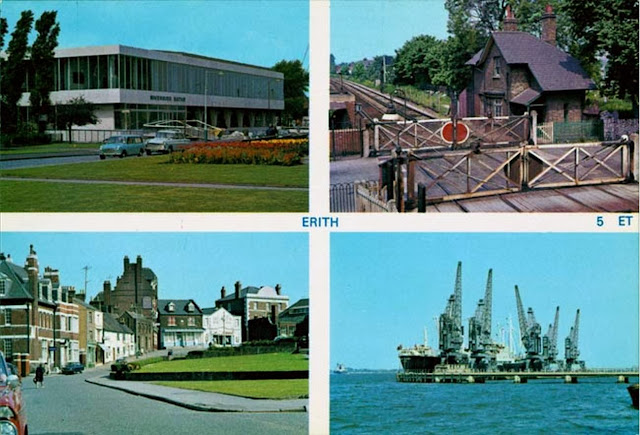 The image above shows a postcard from Erith from back in the summer of 1970. Strange that a postcard should exist from a town that had not been a holiday destination since around 1865, as I wrote last week. The card shows the old Erith Riverside swimming baths, which were demolished a few years ago - why such a bad looking concrete monstrosity of a structure would be commemorated on a local postcard escapes me. The second photo is of the old railway crossing at Pembroke Road, which has long been replaced with a footbridge. I dimly recall the crossing as a small child, though I cannot recall the crossing operators' house - that must have been a very noisy place to live! The third photo is probably the most recognisable today - it shows Erith High Street looking East. The Police station (now converted into fairly shoddy apartments) is still there, as is the Cross Keys pub (the tall building in the centre of the photo, has been restored and converted into office space for the Aleff Group - an international management consultancy). To the right of the Cross Keys are a couple of buildings which are now gone and replaced with the Erith Playhouse Theatre. To the far right is the White Hart pub, which in recent history was defaced by having its' Victorian frontage ripped out and replaced with hideous plate glass, even though the building is both in a conservation area. This was done by the crooks who ran the Potion bar - a short lived emporium which sold tasteless, gassy lager and class A recreational pharmaceuticals; fortunately it was permanently closed down. It now houses the White Hart African Restaurant, and the plate glass frontage has been replaced with a replica of the original Victorian design. The final photo in the bottom right corner of the postcard shows Erith Pier as it was when it was a working entity as part of the deep water wharf. The giant cranes are now long gone, the wharf is now rebuilt as a large Morrison's supermarket; the pier is now a public space, and is a very pleasant place to walk when the weather is nice (or if you are an angler, it is a good place to fish, year round, day or night). 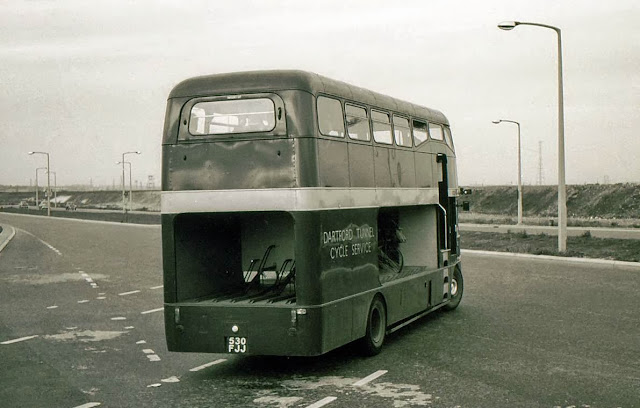 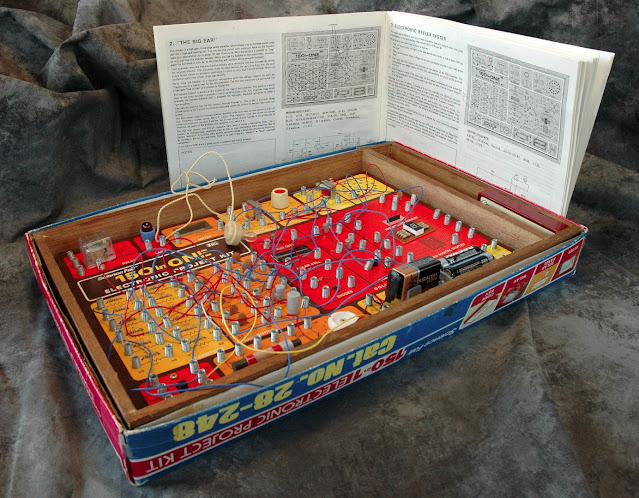 Early last week I was chatting to someone who has made a very successful career in electronic engineering. She mentioned in passing that her interest in science and engineering came from a very early age; she even recalled exactly when it began. It was at her 11th birthday, when her Grandad gave her a Radio Shack 65 in One electronic project kit. This struck a note with me. I too used to own a Radio Shack kit as a child, but mine was the top of the range 150 in One kit, as shown in the photograph above - click on it for a larger version. It was one of the best Christmas presents I ever received from Mum and Dad; I spent endless hours wiring up the various projects, and I have to say that most of them worked very well indeed. The kits, along with an amazing array of electronic equipment were sold by Tandy (the British arm of then U.S giant Radio Shack). The nearest local branch used to be located in Embassy Court in Welling - on the site of what is now the giant Tesco superstore. Incidentally Tandy / Radio Shack were famous for their amazing catalogues published once a year - I used to get each one and spend hours reading through it, though at the time I did not have much of a clue as to what some of the devices and electronic components were actually for. Someone has digitised virtually every catalogue the company ever published, and has made them available online. Click here for a look.
Prior to the customary weekly reports from Bexley Borough Neighbourhood Watch Association, I need to recount a story of an experience I had on Friday morning. I was working away in my home office (I am fortunate to have a dedicated office in my house, rather than having to use the dining table to work on, as so many people have been compelled to do during the latest lock  down).  The phone rang at about 10.30; when I answered it I was greeted with a computerised voice, who told me that the call was coming from the National Crime Agency, saying that I was to be arrested, and my National Insurance number suspended due to fraudulent activity. I was told to stay on the line to speak to an operator. I immediately realised that this was a scam - a fraudulent phone call. I closed the call. For more information on this particular fraud, you can read more on the BBNWA Blog here. It would seem that following the reorganisation of the ward Police, and their weekly reporting, things seem to be taking rather longer than anticipated to return to normal. There are still quite a few missing reports this week, as you will see. The reports that have been released this week read as follows. Barnehurst ward:- "Unfortunately, Barnehurst Golf Club has suffered extensive criminal damage over the last week to the area of the driving range. On the first occasion, fires were found to three driving bays and light bulbs were also smashed. Most recently between Saturday 3/04/2021 and Tuesday 6/04/2021, structural damage had been caused whereby plasterboard walls had been kicked through. Further damage includes damage to a door lock, door handle, a broken fence panel and damage to the netting surrounding the driving range. In Cheviot Close items were taken from within a vehicle. A warrant was carried out on the ward. Cannabis was found in the address and two dogs were seized. This investigation is ongoing. The team stopped and searched two males on the ward. They were found in possession of Cannabis. A resident was spoken to with regards to driving dangerously in a residential area after Officers viewed CCTV footage. The matter was dealt with as a priority. We will be paying attention to Barnehurst Golf Course due to recent events here". Belvedere ward - no report this week. Bexleyheath ward - no report this week. Crayford ward - no report this week. Erith ward - no report this week. Northumberland Heath ward - no report this week. Slade Green and Northend ward - no report this week. Thamesmead East ward - no report this week. West Heath ward:- "Unfortunately, we had had one attempted shed burglary in Lodge Hill on Wednesday 7/04/2021 between 04.51 and 04.59. At this stage, it is not known if anything was stolen. There was a garage burglary in Seaton Road between Tuesday 6/04/2021 21.00 and Wednesday 07/04/2021 06.30. No motor vehicle crimes have been reported this week".
The end video this week is a short film explaining "101 things you need to know about Southeastern" - Some interesting facts and figures, along with some history of the local train operating company. Email me with comments and suggestions to me at hugh.neal@gmail.com.
Posted by Hugh at 11:45 am