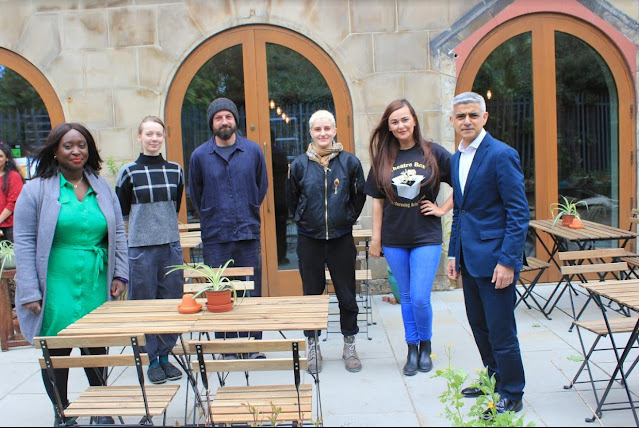 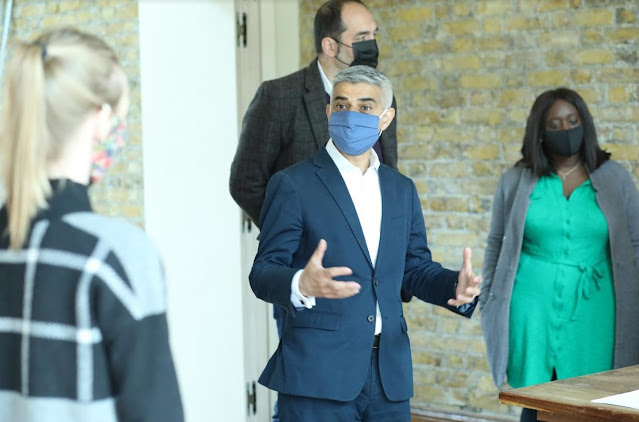 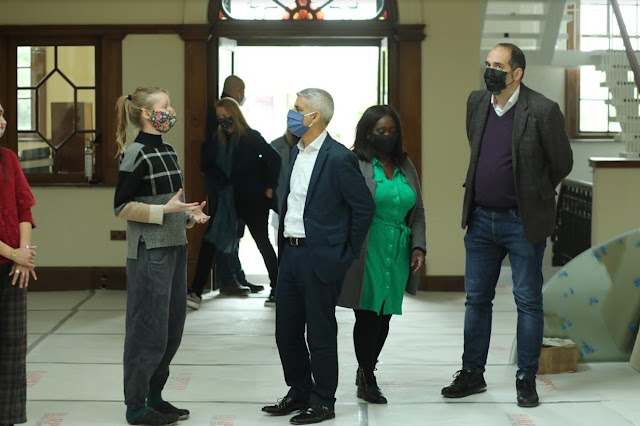 The Exchange had some VIP visitors to The Old Carnegie Library building in Walnut Tree Road, Erith on Monday afternoon. As you can see from the photos above - click on any one for a larger view. The Mayor of London, Sadiq Khan, with local MP Abena Oppong-Asare, along with a number other locally elected representatives paid a visit to the historic former library, which is coming to the end of its refurbishment and transformation. The visit was hosted by The Exchange Co-Directors Sarah Batten and Peter Nutley, along with several members of The Exchange staff. The welcoming committee was originally intended to be larger, but due to Covid-19 restrictions, it had to be limited, which is understandable under the current, rather unusual circumstances. As previously mentioned, The Exchange recently successfully completed a community share offer, which raised an astonishing £150,000 to fund additional works outside of the scope of the main refurbishment project.

Back on the 24th of January, and subsequently on the 31st of January, I wrote at some length on the history of the wartime anti Nazi campaigner Sophie Scholl, and her membership of the White Rose group. Well, I guess that someone at the BBC must have been reading the Maggot Sandwich, as the BBC News website is currently running a story on the very same subject, which you can read here. 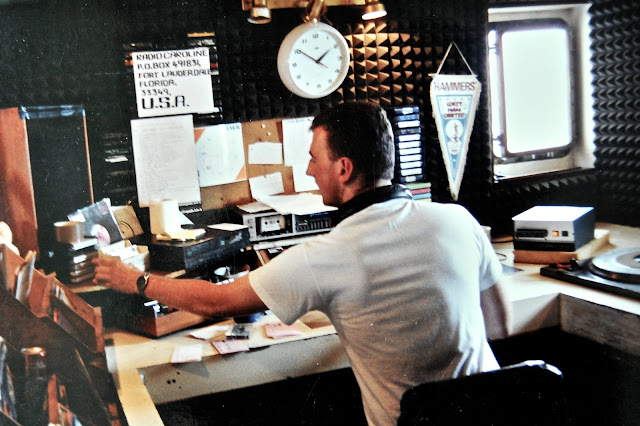 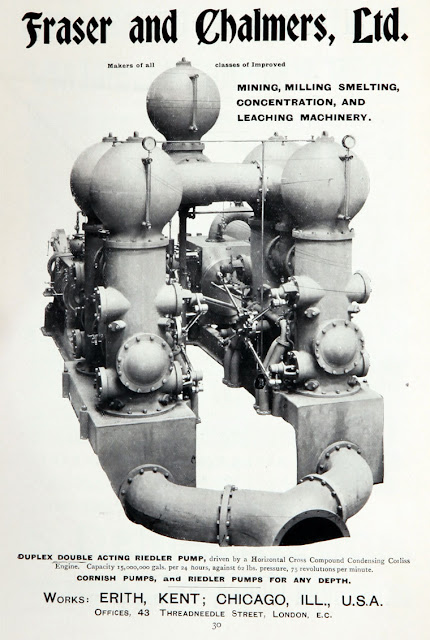 Older Maggot Sandwich readers may be recall the giant Fraser and Chalmers factory. The company had a very long history; they started back in 1849, when two young Scottish men - David Fraser, a millwright, and Tom Chalmers, a foundry man travelled to the USA to take up careers in agriculture. Soon after their arrival in America, the California Gold Rush started, and they found it far more profitable to make mining machinery spares and equipment than to grow crops. They set up a large factory in Montana, and by 1860 they had moved to Chicago and continued expanding. By 1890 they were the largest mining equipment manufacturers in the entire USA. At this point they were approached to set up a new factory in England which was designed to supply mining machinery for the South African gold fields. The Erith works was opened in May 1891. The new factory was built on what had previously been a recreation ground. The British arm of the firm severed all connections with the American part, and by 1903 they expanded production to include steam plant, milling machinery, and general engineering products. Just after the First World War, the factory, which by this time employed four thousand workers and covered an area of thirty four acres was sold to the General Electric Company. 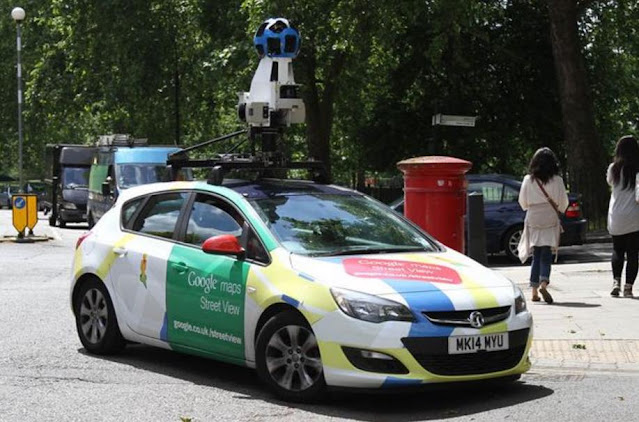 Did you know that Google Street View is fourteen years old this month? The project started as research at Stanford University, and then was transferred in early prototype form into Google co-founder and CEO Larry Page’s car. Taking photos of every part of the planet so that people could virtually travel the world from the comfort of their own homes or mobile devices is the hallmark of Google’s approach to the world around it and the evolution of technology. Starting out as a camera strapped to Page’s car, Street View technology has been added to vans, cars, tripods, backpacks, bikes and even a snowmobile. It has become the eyes of all of Google’s vision for how we view the world after launching on May 25th, 2007. From Larry Page’s car, the very early Street View team, which was comprised of a few volunteers from Google staff, threw some cameras into a van with a GPS and some lasers. The lasers were to grab data so that the team could know what the distance was between the camera and the facades of the buildings. That spacial recognition is what helps Google patch all of its images together and give it that 3D feel. The camera took a lot of pictures, the devices, hooked up to a bank of computers in the back of the van, and then this very unique data set that is what makes Street View was amassed. Street View collects quite a bit of data. the Google Street View project team had to work out a way to scale these original vans to grab as much of it as possible so that they wouldn’t have to drive the same routes more than once. The team installed lasers onto the vans – four on each side – to get distance information, more GPS, collected wind velocity and everything in between.  How was this going to work outside of the original San Francisco test area though? There is now Street View data from more than 3,000 cities and 47 countries all over the world, so there was a lot of work ahead before this project ever saw the light of day. The GPS, laser and photographic data was collected by drivers who would fill up hard drives and ship them back to Google. The drivers wouldn’t send them in until they had five disks completely full. The disks would get shipped to a data centre, the information uploaded and then everything would get fed into its core database and go through a few processing steps. One of those processing steps was the blurring of people’s faces and car registration plates. These are seemingly obvious privacy issues that nobody thought of before the product existed, so Google had to invent the technology to do it systematically. Additionally, there are fifteen images taken for each finished shot and angle that you see on Google Street View today, and Google’s software takes all of these images and combines them together, adjusts the exposure for sun, shadows, colour differences and brightness. That’s the processing that goes into making “perfect” panoramic images. All the while, Google is detecting and extracting information from objects like street signs to feed back into the main Google Maps product. Google Street View launched officially in 2007 and was only available for San Francisco, New York, Las Vegas, Miami and Denver in the USA, and nowhere else. The cameras at that time were 5 megapixels, which is barely what most people have on mobile phones today. Now the cameras have a resolution of 75 megapixels. When you look up a street on Google Maps and click on the Street View option in future, you will have a better idea of the huge amount of work and financial investment that went into what you then are able to see and navigate around. Happy birthday Google Street View!

Now for something of a local history special, with thanks to Will Cooban of the Bexley Local Studies and Archives Centre, who provided the following account of the story of Manor Farm in Crossness. Parts of this article have previously been published on social media.

"THE HISTORY OF MANOR FARM, CROSSNESS - By Jane Showler.

Now for the weekly local safety and security updates from Bexley Borough Neighbourhood Watch Association. I note that the number and length of some of this weeks ward reports have still not returned to their pre - hiatus levels. Firstly the report from Barnehurst ward:- "In the last week, there have been no reports of theft from or theft of motor vehicles. There have also been no reports of burglary or robbery. The team has been focusing on patrolling the ward. We have had intelligence of drug dealing recently and so obtained a warrant at court to search an address in Barnehurst, off Colyers Lane and we expected the warrant over the weekend. We also assisted with a warrant in Erith today (Wednesday 28/04/21) where we seized a large amount of cash and a quantity of drugs. Officers have been carrying out patrols in the local area which resulted in a couple of positive stop and searches and tickets for possession of cannabis". Belvedere ward:- "Thursday 28th Apr: As part of Operation Sceptre week, Thamesmead and Belvedere have been targeting violent offenders in the Borough. On the 26th of April, officers tracked down and arrested a  male in his 20s following a serious assault in Thamesmead last week. The victim has been sustained serious injuries which also included stab wounds. The male was taken to a South London Police station where the investigation continues. So far it has been a very productive week with dispersal zones put in place North of the Borough which we believe has reduced the risk of violent offenders. Friday 29th April. The team are out on the ward again today, patrolling our areas of concern. Stop/ searches have been conducted around the Picardy Street and Dylan Road area". Bexleyheath ward:- "Between Thursday 29/4/21 and Friday 30/4/21 Criminal Damage in North Street - Pushbike found in the street BRUMMELL CLOSE thank you to NHW Co-Ordinator for collecting it. Beware Rogue Traders are operating again, please check credentials and get recommendations from friends and families". Crayford ward:- "We’re pleased to say that there were no burglaries in the Crayford ward this last week. On Friday 30th April the wing mirror was stolen from a vehicle parked at Craymill Square. Tools and work materials were stolen from a van parked in Medway Road overnight Saturday 1st and Sunday 2nd May. As ever, please remain vigilant and see www.met.police.uk for further crime prevention advice". Erith ward - no report this week. Northumberland Heath ward - no report this week.

Slade Green and Northend ward:- "We've just found and recovered this moped which was stolen from the Erith area recently. Victim updated and very happy to be getting there bike back!" Thamesmead East ward:- "Theft of Motor Vehicle in Mangold Way on Thursday 29/4/21 between 2:30 am and 10:55 am. Theft of Motor Vehicle in Birkdale Close on Friday 30/4/21 between 11 pm and 9 am. Criminal Damage in Holstein Way on Saturday 1/5/21 between 8 am and 4:30 pm" West Heath ward:- "No burglaries have been reported to us over the last week. Criminal damage to a motor vehicle in Canberra Road between Thursday 29/04/2021 15:00 and Friday 30/04/2021 11:30. Theft from a motor vehicle In Bedonwell Road on Tuesday 04/05/2021 between 03:37 and 03:41. Theft from a motor vehicle in Brampton Road on Tuesday 04/05/2021 between 00:50 and 01:05. We held an online Ward Panel Meeting via Microsoft Teams last Thursday evening and we have decided our priorities for the next three months will be motor vehicle crime in and around Canberra Road, ASB (Anti- Social Behaviour) Motorbikes Longleigh Lane / Bostall Woods and ASB in Stevens Park".

Now for the end video. It features a short history of Bexley Open Air Swimming Pool, which used to be located in Danson Park. I can recall the pool when I was a child. It had been drained and temporarily turned into a skateboard park, prior to its demolition. Comments to me at hugh.neal@gmail.com.