Like much of the country, Erith has experienced some pleasant weather over the last week - until Friday, at least; a marked change to the dull, overcast and chilly six weeks or so that preceded it. I took the photos above on Monday afternoon in Erith Riverside Gardens - which looked beautiful in the sunlight, if somewhat needing a little care and attention - the grass really needed to be cut, but that is really nit picking. Unless you are an Erith resident, two of the town's best community assets may not be things that you are aware of. Firstly, the aforementioned Riverside Gardens, which is the only public open space in the whole of the London Borough of Bexley that has access to the River Thames. The other community asset is Erith Pier - another destination not very well known to non local residents.
According to details recently published in the new Bexley Draft Local Plan - a mammoth 221 page document, Bexley Council have the intent to build housing over even more parts of the borough. According to the report - which is currently still in draft form - two of the more outrageous proposals brought up in the document are demolishing the Asda and B and Q stores in Lower Belvedere in order to build housing. On top of that, the document then proposes to demolish Morrison's supermarket in Erith, also to build housing. You can download and read the whole bombshell document by clicking here.  Seasoned analysts of Bexley Council's reports will of course realise that they are nothing more than certain officials "sticking a finger in the air". It is unlikely much will come of the draft proposals in my opinion. Once again the council make assumptions that they treat as fact - for example, they mention the DLR coming to Lower Belvedere, the resurrection of the original plan to build a bridge or tunnel across the River Thames at Lower Belvedere, and a plan to build riverside apartments on the wharf in James Watt Way, Erith (currently being used by the RAC as a depot for their vehicle rescue lorries) - despite the site being protected by a legal covenant prohibiting loss of access to the river at the location. These three, among many other assumptions are a classic example of the council treating their desires as facts - it would be nice if the DLR would come to the area, and better cross - river connections would be greeted by many; the draft plan treats these as "done deals" when they in fact are anything but. It is highly unlikely these local infrastructure upgrades will actually happen - at least not in the next few years. If the developments did come to pass, where would all the residents of the new housing go to buy food and drink? The two major local supermarkets would be gone. Comments to me at hugh.neal@gmail.com. 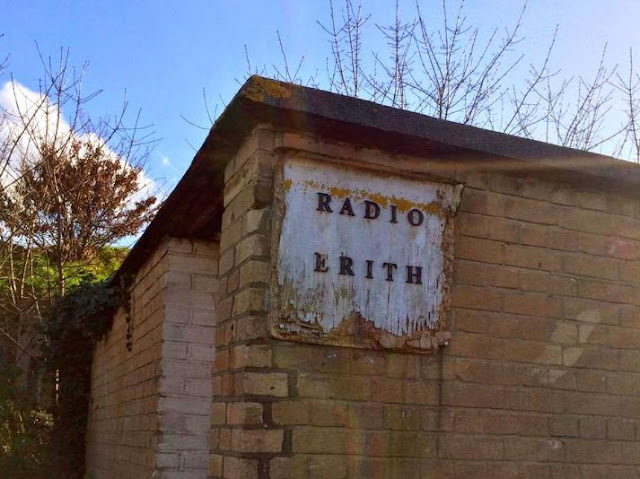 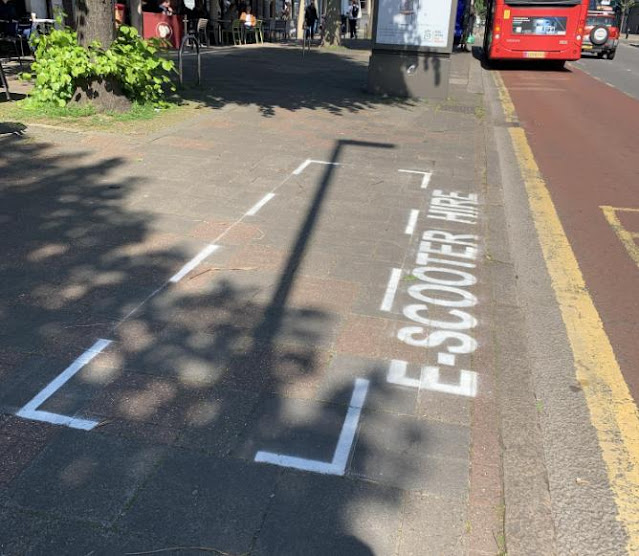 As previously described, E-Scooters are shortly to be available for hire in a test project covering several London boroughs - but not for the time being in Bexley. As you can see above, preparations for the roll out of hired scooters has already begun. Thanks to Miles for the photograph. As I have written before, there are currently no plans to legalise the personal ownership or use of E-Scooters in public places, though this rule is so commonly ignored as to really make the regulation irrelevant. It occurs to me that when the E-Scooter hire test project gets under way, one of the largest challenges to the operators will be what retailers euphemistically refer to as "shrinkage" - or more correctly, theft by customers. I and others are concerned that a significant percentage of the E-Scooters will be stolen, the onboard tracking system disabled, and either kept for personal use, or most likely broken for spares which will then be sold on. Many E-Scooters - in the same way as conventional cars and motor cycles are often worth considerably more as spares, than they are in whole form. I can see a lively black market in stolen E-Scooters and their components soon being established. Time no doubt will tell. I also have reservations regarding a much more well established form of electric transportation - the electric mobility scooters used by the elderly and the mobility impaired. These mobility scooters can be real a menace when operated irresponsibly – they may have several humorous alternative names such as the "Nanbretta" or the "Frinton Ferrari" (an offshoot of the old saying “Harwich for the continent, Frinton for the incontinent"). This hides a sad story that quite a large proportion of mobility scooters can travel at substantially more than normal walking pace; when this is combined with the lack of compulsory training or the need to have third party insurance it does leave a legal minefield for both the operator of such a vehicle and also the members of the public than encounter them. I firmly believe that mobility scooters are a good thing; they enable people who otherwise might find it difficult to get out and about, and stay in contact with general society. The old situation with people becoming housebound and isolated when their ability to move under their own steam became impaired has become far less common. I think it vital for elderly and mobility impaired people to retain their independence. The problem is that a small minority treat the scooters as some kind of fairground ride. I think that there should be some kind of compulsory formal training for mobility scooter owners, on a similar basis to the (voluntary) cycling proficiency test, along with a compulsory insurance policy covering third party liability. Some mobility scooters seem to be capable of travelling much faster than the fifteen miles per hour limit that is meant to be applicable to such vehicles; indeed I have seen a couple of elderly ladies on the pavement beside the Erith Construction HQ (the former Job Centre) in Queen’s Road who were racing each other – it reminded me of the Monty Python “Hell’s Grannies” sketch. It is only a matter of time before a mobility scooter rider, or a pedestrian is seriously injured unless some action is taken. What do you think? Email me at hugh.neal@gmail.com. 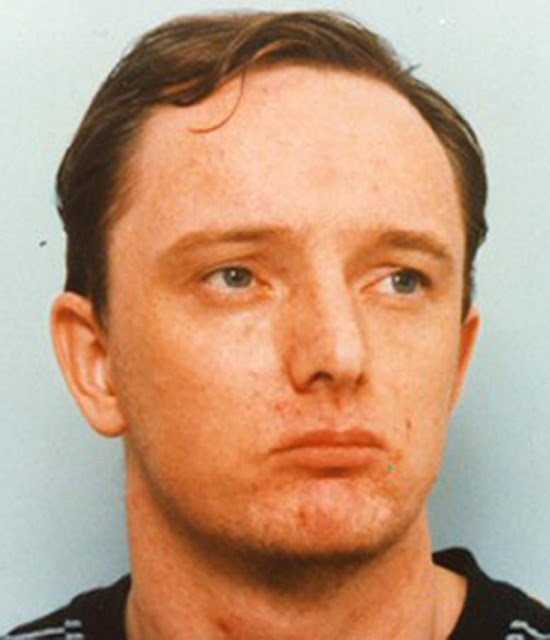 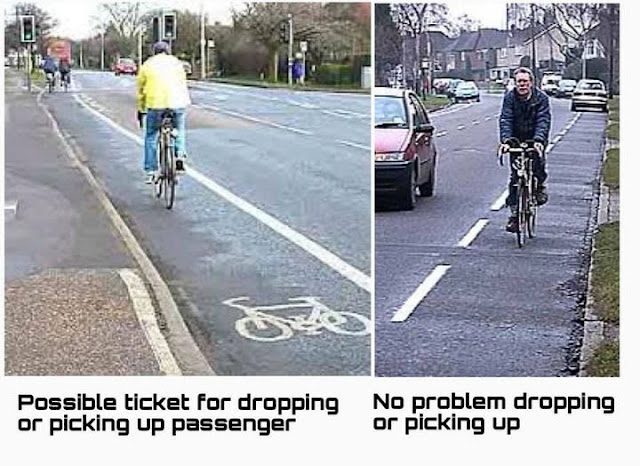 From Tuesday 22nd June, fines of up to £130 will be issued in London to drivers parked or stopped on cycle lanes marked out with unbroken white lines. Local councils will be able to use enforcement cameras to issue fixed penalty fines to drivers parking illegally in cycle lanes. Remember this when dropping passengers, picking up booked jobs, or assisting disabled passengers.

Now for the weekly local safety and security updates from Bexley Borough Neighbourhood Watch Association. Unfortunately many reports from the various Police Safer Neighbourhood Teams are once again missing. Barnehurst ward - no report this week. 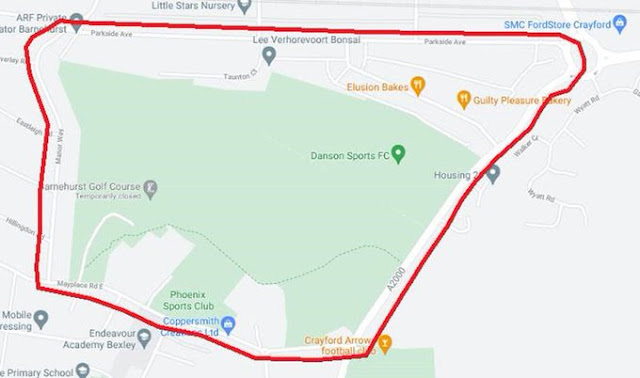 Belvedere ward:- "The use of Direction to Leave Notices under Section 35 of the Anti-Social Behaviour, Crime and Police Act 2014, has been authorised by Inspector Lowe for the area of Barnehurst Golf Course with the Boundaries being Lee Verhorevoort Bonsai, A2000, Mayplace Road East and Manor Way. This is due to the anticipated rise in ASB within the area defined by the map. Officers are being deployed to the area to assist with the policing of the dispersal order. This will be in place from 11.00HRS on Tuesday 01/06/2021 to 1059HRS on Thursday 03/06/2021". From Neighbourhood Watch coordinator:- "On Wednesday 2nd June a very elderly resident of Kentish Road who suffers from dementia was approached by a conman at Belvedere station.  The conman said to him that a neighbour had told him that he had a water leak. The conman followed the resident back to his house and said that the roof had a loose tile, which he would return to fix and it would cost £115.  The resident handed over the money and the conman left". Bexleyheath ward - no report this week. Crayford ward - no report this week. Erith ward:- "The date of the next Erith ward panel will be the 4th August 2021 7 pm at the Exchange Erith. Due to some ASB your Erith team are out today patrolling around car parks and the Town centre, we are working late tonight and will be stopping any large groups of youths". Northumberland Heath ward - no report this week. Slade Green and Northend ward - no report this week. 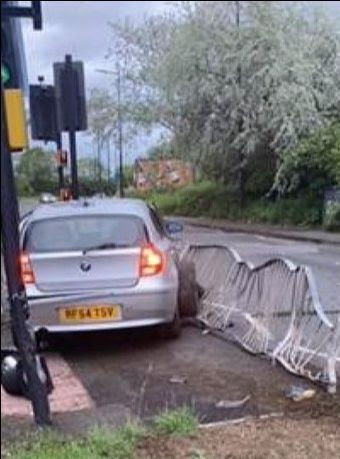 Thamesmead East ward:- "On Friday 21st May 2021 officers from Thamesmead and Belvedere SNT arrested a male for possession of an offensive weapon, aggravated theft of a vehicle, possession of drugs and driving with no licence and no insurance. Officers attempted to stop a vehicle in Norman Road, Belvedere when it failed to stop for officers. The vehicle managed to temporarily get away until it was found crashed into the central reservation on Yarnton Way. The driver got out of the stolen vehicle and began to run from officers where he was rugby tackled to the ground. He was handcuffed and during the search, a large hunting knife was found down his waist band. This is yet another example of proactive work carried out by your local officers. Violence is our number 1 priority and we are committed to keeping the community safe. We will continue with our proactive campaign and we will get more criminals off our streets". From Police SNT Team - PCSO Buckley:- "Dear residents, We are appealing for volunteers to join our local Ward Panel. You do not need previous experience with ward panels. We would like people who are in touch with their local community and willing to be a voice for them. Anyone who lives, works or volunteers in an area is welcome to join that areas Ward Panel. A Ward Panel is a group of volunteers who come together for meetings three or four times a year. The Ward Panel invite the local police, councillors and local authority to those meetings where they alert them of issues that affect the Ward. The panel jointly devise an action plan for dealing with issues and then hold police/local authority/councillors to account for actions assigned to them. The Safer Neighbourhoods Team arrange and organise the meetings, finding a suitable date and venue. There is usually the ability to attend in person (Once covid restrictions are lifted) or to attend virtually. The meetings last about an hour and consist of input from the Supervisor of your Local Policing Team (Safer Neighbourhoods Team) who will provide you with information on crime data, issues the police are aware of and updates on progress from previous meetings. It is important that all members of the community are represented and heard and that these meetings are representative of the community. This link contains Maps of wards and their boundaries. If you are interested or would like more information about Ward Panels please do contact us on 0208 721 2049 or email the team at thamesmead.snt@met.police.uk".

The end video this week is a short film by a visitor to Erith and his experience whilst in the town; it is an interesting perspective from someone who lives outside of the local area. Give it a watch and let me know what you think - Email me at hugh.neal@gmail.com.