The two photos above - click on either to see a larger version - were taken by me at 2pm on Wednesday afternoon in Bexleyheath Broadway. They show a Police area patrol car and an unmarked Police vehicle - there was a third area patrol car out of the picture to the left. A number of officers had arrested and handcuffed a couple of men outside of Lloyd's Bank, as you can see in the upper of the two images. What the men had been arrested for, I am not sure. It did appear that the Police operation was very slick and professional.
Following my article on the horrible smells coming from the ADM Oils refinery, I received the following Email from a long time reader who wishes to remain anonymous:- "I have the misfortune to live not far from the ADM Oils. In the last month or so the smells have been truly horrible, it is very irregular, at different times of the day or night, but pretty much every day there is a spell of this sickly / sweetly / fermenting smell. I already contacted Environmental Agency, they said keep calling each time the smell appears, hopefully something gets done about it. The smell is definitely back". Have you experienced the horrible smell from ADM Oils? Email me in complete confidence to hugh.neal@gmail.com.

Whilst there has been much press coverage, and indeed discussion regarding the ongoing 5G mobile phone infrastructure roll - out, very little has been said abut the next generation of wired, fibre optic network connectivity. People in the UK have had ADSL, followed by standard fibre broadband for the best part of two decades now, but the technology has moved on, and data transfer speeds have increased enormously. Up until now, these ultra fast connections have been mainly limited to large businesses and broadcast companies - of which I have first hand personal experience. I worked  for a period at BT, project managing the installation of ultra high speed fibre optic cables for their contract with the BBC - connecting various TV and radio studios with broadcast transmitter sites and outside broadcast locations such as Premiership football grounds. The ultra high speed connectivity that up until now has been for the exclusive use of the likes of the BBC is now being deployed for the general public; two of the first towns to have public ultra fast connectivity are pretty close by; Chatham and Gillingham are being used as pilots in a £40 million roll - out project, which, if successful, will be extended to areas such as the London Borough of Bexley and beyond. The colour coded map above - click on it to see a larger version - shows the current status of ultra fast fibre connectivity in the area. Promising download speeds of a gigabyte per second, the fibre based broadband provider VFast says it will bring "next generation digital connectivity" to the almost every home and business in the towns. The company has partnered with Vodafone and TalkTalk to provide the platform for residential and commercial customers. Many current internet providers offer download speeds of between 35 megabytes per second to about 100Mb in some areas – 100 times less than Vfast says it will provide. It is part of an overall £4bn investment in internet infrastructure across the country by CityFibre – the UK's largest independent fibre broadband platform. Constructing the network started in February and will see all fibre cables from the server directly to the customer's door promising faster speeds instead of using copper wiring for part of the network. The service is being provided in 60 places across the UK as CityFibre aims to create what it calls Gigabit Cities providing eight million households. CityFibre and VFast are direct competitors with the larger telecommunications companies such as BT, all of whom are currently engaging in a huge programme of work which is known by the acronym "FTTP" - Fibre To The Premises. Fibre-to-the-premises (FTTP) replaces old copper broadband lines; fibre optic cables are run from the local exchange direct to the premises. Because the fibre cable comes right into the building, there is less ‘contention’ which gives you a faster and more reliable broadband experience. 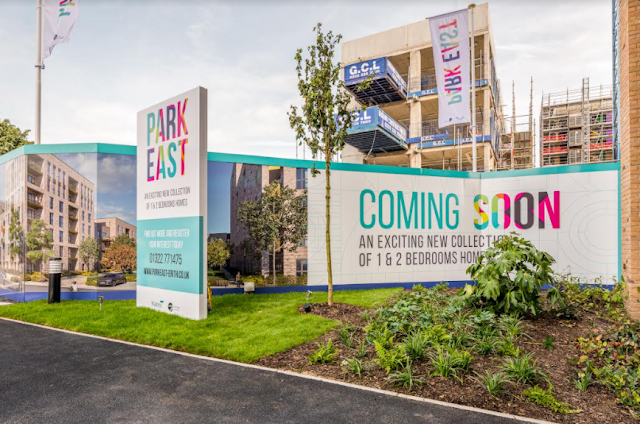 On Thursday morning I received the following press release regarding an important local residential redevelopment:- "Brand new apartments, which are set to transform a tired and dated high-rise estate in the London Borough of Bexley, are selling fast with eight apartments reserved in the first weekend, according to developers. ‘Park East’, which launched on 21 August, is the latest joint project by Orbit and Wates Residential, part of leading privately-owned construction, property services and development company, Wates Group. It is being developed by the same team responsible for the success of neighbouring Erith Park on the former Larner Road estate in Erith.  Both schemes have taken tower block estates and transformed them into attractive new communities with modern, high specification homes set in attractive landscaping. Paul Richards, Group Director of Customers and Communities from Orbit, commented: “Between Erith Park and Park East we’re delivering over 900 new homes but our regeneration commitment is much wider.  Not only are we creating an attractive and thriving environment, we’re providing work experience, apprenticeships and supporting a range of community projects and local businesses, which will continue to benefit the whole community. Early sales suggest that there is a lot of demand from people to join this community so we would urge interested people to contact us now.” When complete, Park East will include a total of 320 apartments for sale, shared ownership and rent.  All the homes have a large balcony or terrace and the use of attractive communal gardens.  For families there are the added attractions of the Active Horizons community centre, Jacqueline Gems Childcare nursery and the play and ecology areas of Erith Park. Helen Bunch, Executive Managing Director, Wates Residential, said: “Everyone deserves a great place to live, and Wates Residential has created these contemporary new homes at Park East in Erith with modern day living in mind. Larger than average living spaces are designed to adapt for work-life balance, and natural day light is maximised with full length windows, private balconies and terraces for each home. “The apartments, with a high specification, are set around a series of landscaped gardens, with open green space and play areas for everyone to enjoy. There is also easy access to local shops, transport links, parks, schools and riverside walks by The Thames – we want people to love living at Park East and be proud to call it home.” Prices start at £257,500 for one bedroom apartments and £297,000 for two bedrooms. 77 homes are Shared Ownership properties which will be available to purchase via Orbit Homes, whilst a further 64 private sale properties are available to purchase through Wates. Due to ongoing Covid-19 protection measures, please make an appointment to visit the sales centre.  Contact Jeanette on 01322 771472 https://parkeast-erith.co.uk for private sales and Jane on 01322 771474 https://www.orbithomes.org.uk/park-east/ for shared ownership. For anyone local not quite ready to buy, there are also London Living Rent apartments available, where people can rent whilst saving for a deposit.  Register your interest for these at londonliving@orbit.org.uk. Other rented homes will be let to local households nominated by Bexley Council through Bexley HomeChoice".
The end video this week comes from famous YouTuber Geoff Marshall, who specialises in informative and entertaining videos regarding public transport in its many forms. In this video, Geoff discovers a quirk in local ticket prices, which he describes thus:- "Crossrail was meant to open back in December 2018, but was delayed. When it does eventually open in 2022, you’ll be able to get a direct train between Canary Wharf and Abbey Wood. But the TfL fares have already been put in place ready for it, meaning that if you make this journey right using the DLR + SouthEastern then it's already cheaper right now to travel one one stop further as I demonstrate here …" Geoff explores Plumstead, Abbey Wood and Belvedere stations. Do give it a watch, as it may save you money if you travel by train. As usual, please direct any comments and feedback to hugh.neal@gmail.com.
Posted by Hugh at 12:30 pm