I took the two photos above (click on either for a larger view) on Thursday lunchtime, at the start of the three day Bexleyheath Continental Market event, which ran from Thursday morning to Saturday evening. The market featured all kind of stalls from independent traders. Stalls included, but were not limited to the following:- Little Chef Noodles, O’Donnell Moon Shine, No Name Distillery, Himalayan Salt Lamps, Gemstone Jewellery, Wiltshire Chilli Farm, Harpers Exotic Burgers, Hot & Fresh Churros.

After what seems like a prolonged delay, work is finally set to begin on the improvements and upgrades to the area around the entrance to Erith Pier, known as Pier Square. It is located adjacent to the Wharfside Close residential area. The regeneration is part of the Greater Erith programme of local improvement works. Throughout the works, access to the pier will be maintained, so people will still be able to visit it despite the construction activity. In a recent press release, Councillor Munur, Bexley’s Cabinet Member for Growth commented: “The improvements at Pier Square will create more public space with better views of the river that the local community can enjoy and be proud of. Along with the restoration of the old library building and improvements to the Riverside Gardens this is another important step in the continuing regeneration of Erith." The stated aim of the Greater Erith programme is:- "To  harness the entrepreneurial and creative spirit in the town to bring opportunities for regeneration and growth. The programme is dedicated to  working with the local community to help Erith become a flourishing riverside town by rejuvenating existing spaces, enabling new developments, nurturing innovation in the burgeoning maker movement and enhancing all the things that make Erith great". 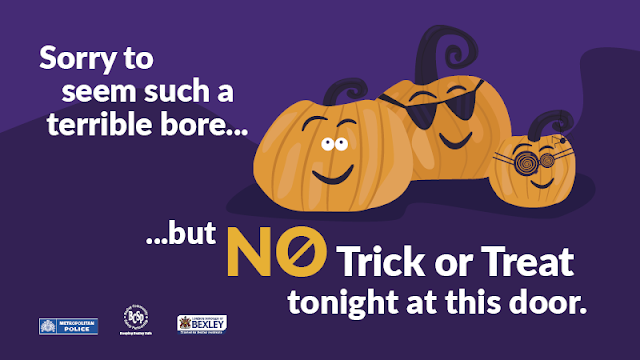 Halloween seems to be taking over as the main winter festival from Guy Fawkes Night. Halloween was originally created in pretty much its’ current form by 18th century Irish people, the word is a corruption of All Hallow’s Eve. Irish immigrants to America took the tradition there, and it was exported back across the Atlantic in the early 1980’s. Although Halloween was celebrated before this time, it was a far lower key and less involved affair. I am convinced that the increase in popularity of the Americanised version of the festival can at least partly be laid at the feet of Stephen Spielberg and his 1982 movie “ET – The Extra Terrestrial”. The film carries strong Halloween themes such as dressing up and “Trick or Treating” which prior to the opening of the film had been relatively uncommon in the UK. The massive popularity of the film exposed may children of the time to take on the American aspects of the Halloween festival; many of those children now have children, and possibly grand children of their own, and the festival thus now has an amplified resonance not previously seen. Personally I am not struck with the whole thing, which basically encourages small children to demand goods with menaces, but I am probably in a minority.

The following historical article was originally published back in 1925 in the Kentish Times - it was written by "Tumbler" Bell, the pioneering sportsman and union activist of late Victorian times who became a chronicler of old Erith in the pages of the then local newspaper. He wrote:- "Prior to the establishment of Messrs Easton and Anderson’s Engineering Works on the river bank at the bottom of what is now known as Manor-road, Erith, what was known as the Round House stood on the site.  A short distance away was Anchor Bay Farm, occupied by old Mr and Mrs Harry Graham, who saw the rise, decline and passing of both the engineering works and Messrs J R White and Co’s brickfields. They lived to a ripe old age, deservedly respected by all who knew them. To provide housing accommodation for the workmen, the houses in Appold-street, Wheatley-terrace, James Watt-place, and Rumford-place were built, and owned by the proprietors of the engineering works.  Houses were also built on one side of Manor-road, including the Royal Alfred public-house.  After sundown the locality was very dark, the exception being the well-lighted Royal Alfred, consequently the spot for congregation was the “New Light”, and by that name the house was generally known. The youths of the neighbourhood used to meet outside this house to discuss Rugby football, quoits, running, etc. There were English, Irish, Scotch, and Welsh lads.  Many could play fifes, whistles, etc.  A fife and drum band was formed; practice was allowed in the “Shant” (a long, narrow wood building, in which Easton and Anderson’s workmen took meals).  When proficient, the band paraded the streets, and a good show it made. All went well till the day it was discovered that the side drummer’s mother had converted the drum into a cinder sieve. The band broke up as a consequence. The “New Light” was used by workmen from both the works and the brickfields.  Lively arguments took place as to who could run the faster, which usually ended with the men taking off coats, waistcoats, and boots, toeing a line in the centre of the road, and racing each other along the road, round the houses, or round the backs in the brickfield.  That soon started the running craze, and young brickmakers and foundry workers were soon finding quiet spots for practising to prepare for racing each other at a given distance. When talking to admirers or critics some of the runners boasted of remarkable running feats done.  One evening one of them visited the “New Light”.  After drinking a quantity of liquor, he began to boast, and got so speedy that those present deliberately doubted his statements. “How far is it from the ‘Light’, up Manor-road, to Beadle’s Bridge, round Crescent-road, to the bridge at Whittingham’s shop, and back to the ‘Light’, and how long would it take you to do it?”  He told them.  Challenged, he took off coat, waistcoat, and boots, and toed the line in the road. Watch in hand, the time-keeper and starter got him off, and immediately stopped the watch.  All went back into the “pub”, to wait.  After a time the runner stumbled into the bar, panting heavily. The judge showed him the watch, and said, “You’ve done it in no time.”  “If I hadn’t fallen down twice, I’d have done it much quicker,” said the runner. Amusements would be arranged to take place on the same day as major events.  A farmer’s four-wheeled waggon was stood opposite the “pub”, to be used as a platform for singing contests, bobbing for apples, eating treacled rolls, etc.  A well-greased pole with a leg of mutton tied at the top was erected for a climbing competition.  Running races and other items took place.  On these occasions Don Andrews (a local comic singer) would climb into the lamp frame at the top of the lamp standard nearby, and recite the words of a ditty, and finish each verse with “Sing, brethren, sing,” and the assembled crowd would join “Don” and sing wholeheartedly." 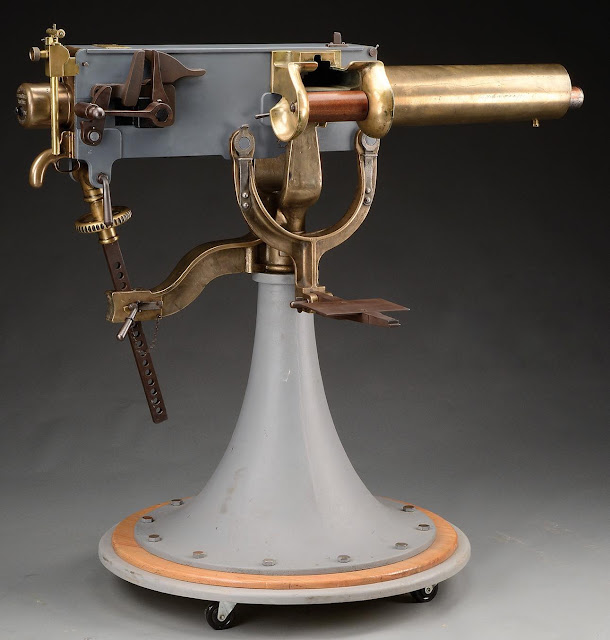 The photo above shows a weapon that was produced in the Victorian era. It is the reason why older residents of the Western end of Erith around Pembroke Road and Alford Road know the area as the "Pom Pom". The rather impressive looking Victorian naval gun is a Maxim 37mm heavy machine gun / light cannon built in 1890 in Erith. It was popularly known as the "Pom Pom" gun, due to the noise it made when firing; The Maxim factory in Fraser Road, Erith (what is now the BATT Cables factory and warehouse) was where the guns were made in the 1890's, back then there was a test range to the rear of the factory where the guns were test fired before being shipped to their customers. The noise of the guns being test fired gave rise to the informal name, which is still in use today, some 130 years after the last 37mm naval guns were test fired on the site - astonishing for a tiny piece of local social and engineering history.
Several news sources have announced that the maximum limit for NFC equipped debit card cashless payments (sometimes known as tap and pay) has been raised to £100. Personally I am concerned by this – for many people £100 is a substantial sum of money. To be able to “spend” or make a transaction of up to this amount simply by being in proximity with a suitable reader is something that has long worried me. When the contactless cards were first issued the maximum limit for a non – PIN number payment was set at £10; the banking industry lobbied for this to be increased, and historically this has happened a number of times, first to £20, then £30, and once the Covid-19 pandemic was under way, it was raised several times more. The original concept of "tap and pay" was to, for example, allow a customer to quickly buy a sandwich, packet of crisps and a drink at lunchtime, thus keeping queues short. It was never intended to allow for a full weekly supermarket shop, as has now become the case - it is a definite issue of "Scope Creep". The problem is that contactless technology is not 100% reliable, and it also has a history of security vulnerabilities, as I have described in the past. Just like when Chip and PIN was introduced, where the onus on proving the transaction had / had not occurred was transferred from the bank to the individual, the responsibility for the security of your bank account is biased strongly on the side of the banks – basically any transaction that happens on a “tap and pay” card is the responsibility of the card user, not the bank. Getting refunds from swipes made in error, or where a fault occurred can be extremely difficult. Personally I think that swipe to pay is not for me – I have a bog standard “Chip and PIN” card, which might be slightly less convenient in certain limited circumstances, but it is a whole lot more secure - If your bank sends you a contactless card which you might not actually want, you can contact them to replace it with a standard card. This is a service that the banks don't advertise, but do offer if asked directly. I asked for a standard card when my previous bank debit card turned up with contactless payment enabled, and when my current card arrived in the post at the end of December last year, I was anticipating having to visit my branch to ask for a replacement – my concerns were unfounded; it would seem that the bank had made note of my preferences and sent me a bog standard card – a nice touch. What do you think? Email me at hugh.neal@gmail.com. 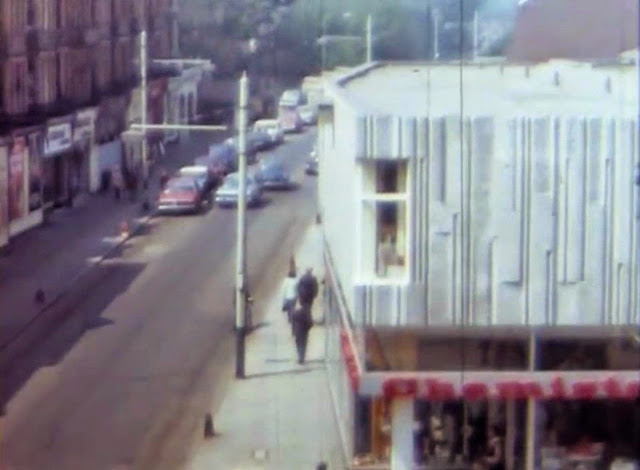 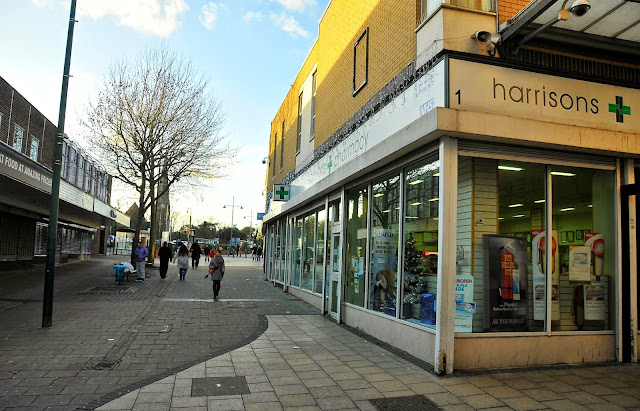