I took the photos of the work being carried out to Pier Square in Erith earlier this week - click on any image to see a larger view. I have visited the site on numerous occasions since the reconstruction and refurbishment of the site began; whilst work is obviously being undertaken, I have yet to actually see a construction worker appear. The work is scheduled to finish by the end of January - something I feel is excessively optimistic. If you click on and see the uppermost of the three photos, you will see that someone has written a message on the promotional banner affixed to the temporary fencing around the site. I have to say that I completely agree with the anonymous authors' sentiments - the destruction of mature trees previously on the site was unnecessary. What do you think? Email me at the usual address - hugh.neal@gmail.com. 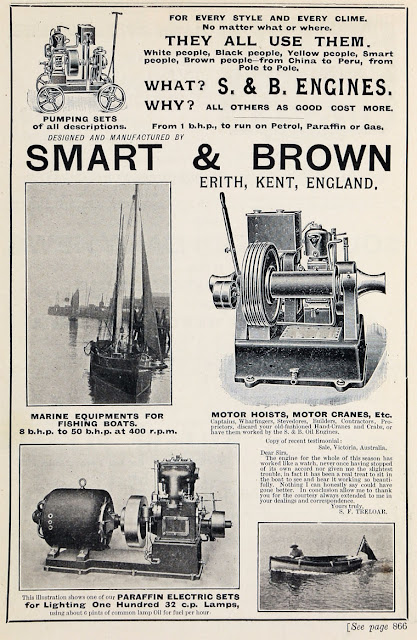 I suppose one must read the press advertisement above with a view from the period; Smart & Brown were an engineering company based in Erith that existed primarily in the inter - war years. They were described as:- "Engineers, Toolmakers and General Machinists. Specialities: paraffin and petrol engines for all purposes, Smart's milling and wheel cutting attachments for the lathe, four-cycle engines and complete marine equipments using paraffin or petrol, engines for stationary purposes (petrol, paraffin or gas), S. and B. Motor Winch"
News broke last week that The National Audit Office has published a report on the state of the BBC and its public funding. The report stated that ihe BBC could be forced to replace expensive high-end dramas and natural history shows with cheaper programmes owing to government-imposed funding cuts. Popular shows also risk being cancelled if the BBC thinks the money could be better used elsewhere to reach younger or diverse audiences who have deserted the national broadcaster. Meg Hillier, the chair of the public accounts select committee, said in a recent press interview that forthcoming cuts to on-air programming and a greater showing of repeats could make people less willing to pay the £159 a year licence fee. “Almost half of its forecast savings will come from cutting back on the amount of programmes [the BBC] makes, meaning it will have to churn out more repeats to fill TV schedules,” she said. “The BBC faces a significant challenge in the battle for viewers. It must be wary of the risk that reducing content may lead to yet more people jumping ship and choosing not to pay the licence fee.” More than 120,000 people a year are prosecuted for non-payment of the licence fee, with five people sent to prison in 2019 for failing to pay fines relating to their cases. It strikes me that the BBC is in an unsustainable position; when it was created, nearly 100 years ago, it was a national monopoly, but, almost a century later, the world has changed immeasurably, especially in the area of communications. Is the BBC still relevant in its current form? As I have mentioned some time ago, I spent six months working with senior members of BBC management in a professional capacity. With a couple of notable exceptions I found them to be the most entitled, pompous and self important people I have ever had the misfortune to work with. Comments to hugh.neal@gmail.com. 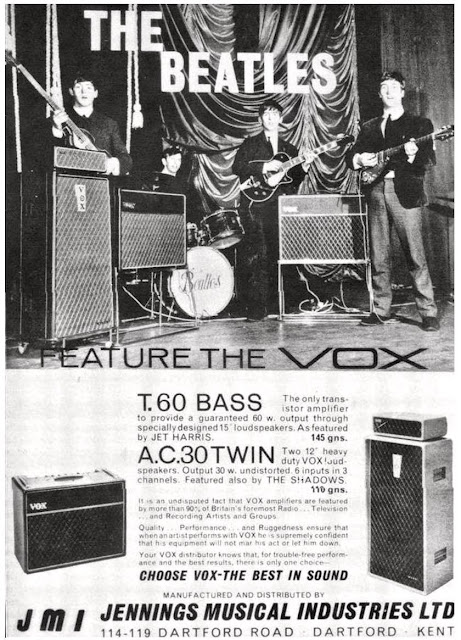 With the recent release of the epic three part video documentary "Get Back" - created by Lord of the Rings director Peter Jackson, attention is once again on The Beatles. It is not widely known that the band had a connection with the local area, which, whilst nor as strong as the Dartford connection with The Rolling Stones, it still makes for interesting reading. The poster above shows what was one of the very first commercial product placement deals in UK history - when The Beatles promoted the Dartford and Erith based Vox guitars and amplifiers. Founder Thomas Walter Jennings started the business, then called JMI (Jennings Musical Instruments) in Dartford in 1958, when he took a prototype guitar amplifier which had been demonstrated to him by big band guitarist and Belvedere resident Dick Denney two years earlier, and turned it into a working, commercial product – the Vox AC-15. The AC-15 was almost immediately purchased by Hank Marvin, and the unique sound of the Shadows was down primarily to the use of Vox amplification. Soon after, the “British Invasion” of the early 60’s was under way, powered almost exclusively by Vox amplifiers. Keeping it local, Dartford’s own Rolling Stones used Vox, as did The Kinks, The Yardbirds, and in what was one of the very earliest pieces of celebrity product placement, Vox amplifiers were promoted and exclusively used by The Beatles, after manager Brian Epstein negotiated a deal – one which greatly benefitted JMI, who were pretty much called Vox by this point. As the audiences for gig got bigger, and the venue sizes increased, the need for more powerful amplification became evident – the 15 Watt AC-15 was not powerful enough; JMI effectively nailed two AC-15 amps together to create their all time classic Vox AC-30 amplifier – a model still in production to this day. Contemporary musicians who employ the AC-30 include Brian May of Queen, who was the first person to create a “wall” of AC-30’s to create his unique and totally distinctive sound; Tom Petty, Rory Gallagher, Pete Townshend, Ritchie Blackmore, Mark Knopfler, Paul Weller, and the Edge of U2 – pretty much all of rock royalty use or have used Vox amplification. JMI also manufactured guitars, many of which were technically ground breaking – including active pickups, and built in sound effects – the down side of this was that they tended to be heavy and ugly, and did not pick up many celebrity users. JMI / Vox also invented the Wah Wah pedal – most famously used by Jimi Hendrix, and the fuzztone distortion pedal used by Jimmy Page, then of the Yardbirds, and soon to be of Led Zeppelin. Vox / JMI also created the very first wireless microphone system, early models of which gained a reputation from picking up interference from nearby mini cab radios. Another very successful and influential product made by JMI / Vox at Erith was the Vox Continental electronic organ, which most famously featured on “The House of the Rising Sun” by the Animals, and “Riders on the Storm” by the Doors (actually, pretty much any Doors track heavily features the Vox Continental – it was integral to their sound). 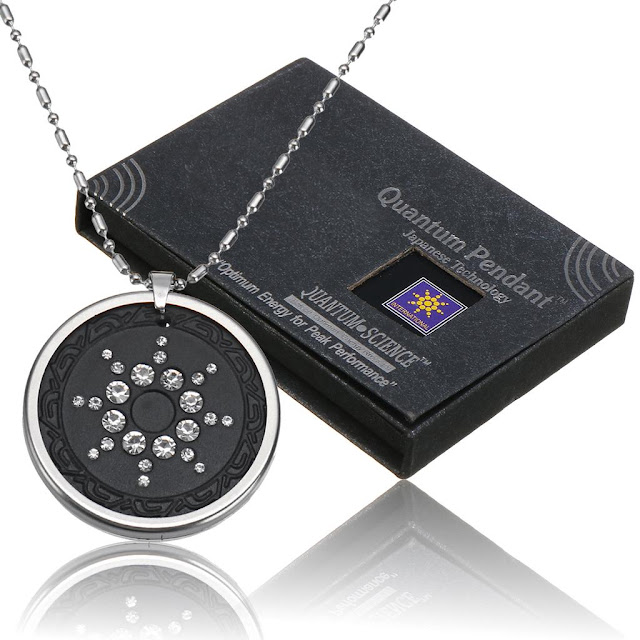 Much has been written over the last year or so regarding deluded conspiracy theorists and their obsession, amongst other things (Covid-19 being a favourite, of course) with 5G mobile technology, and how they view it as being evil - utterly bonkers and completely without any foundation in science. Con artists will always exploit the stupid and delusional, and to this end there are many "5G cancelling" charms and so called "magic jewellery" on sale at hugely inflated prices. In a case of supreme irony, authorities have analysed these items, with some fascinating - and hilarious results. The Dutch Authority for Nuclear Safety and Regulation Protection has banned a list of so-called anti-5G necklaces, wristbands and eye masks because they could harm their gullible users. The agency commissioned a study by the Netherlands’ National Institute for Public Health and the Environment (RIVM) found that many of these so-called radiation protection devices actually emit harmful levels of ionizing radiation from "radioactive materials or waste." While the emission levels are low, if you are the kind of person who'd wear these non-stop then they could cause harm. "The consumer products tested contain radioactive materials and therefore continuously emit ionizing radiation, thereby exposing the wearer. Exposure to ionizing radiation can cause adverse health effects," the regulator warned. "Due to the potential health risk they pose, these consumer products containing radioactive materials are therefore prohibited by law. Ionizing radiation can damage tissue and DNA and can cause for example a red skin. Only low levels of radiation have been measured on these specific products. However, someone who wears a product of this kind for a prolonged period (a year, 24 hours a day) could expose themselves to a level of radiation that exceeds the stringent limit for skin exposure that applies in the Netherlands." The Dutch have banned the Energy Armour sleep mask, black and white necklace and super bracelet, as well as a "quantum pendant," and four products from Magnetix - including the "Smiley Kids bracelet with negative ions." All are now prohibited under the Netherlands Nuclear Energy Act. In contrast to recent science-challenged 5G protests, which have taken the form of multiple arson attacks and even a shooting, the Dutch crackdown actually has some grounding in human healthcare. Still, the Dutch ban will do very little, these woo products are still available online and from companies like US pharmacy giant Walgreens. Will this stop people believing in pseudoscience? Of course not, that's as old as mankind. Of course there is money to be made peddling quack cures to the credulous. The Dutch warning isn't minor - some of the materials in these devices might cause actual harm. 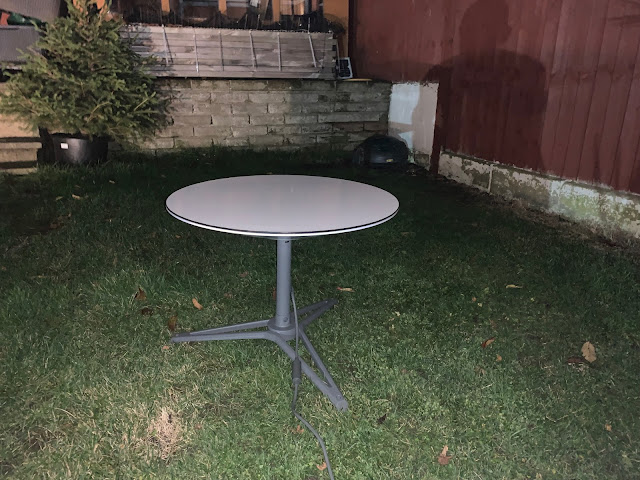 Miles has posted a short unboxing video on YouTube, which shows his Starlink equipment as it arrived at his home. You can watch the video below. Comments as always to me at hugh.neal@gmail.com.
Posted by Hugh at 12:00 pm