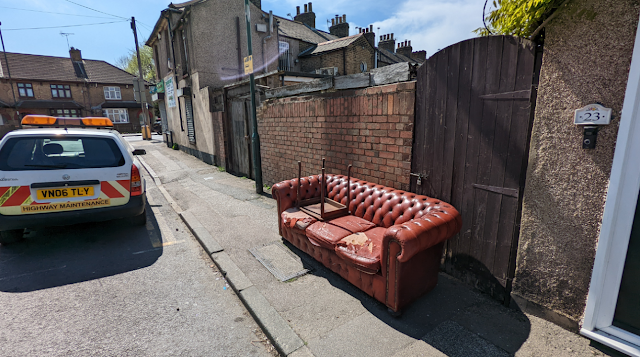 The local area has been subject to criminal fly tipping for many years. Unfortunately, the recent longer evenings and mild weather seem to have brought out even more criminal fly tippers than usual over the last week. In the last few days, three abandoned sofas have been dumped in the area in and around Manor Road in Erith. All three of these have been reported to Bexley Council. As you can see in the photo above, click on it for a larger view - one of the sofas was even dumped outside somebody's front door. I have spoken to several local residents and they confirm that the sofa was not dumped by anybody living in the street. One man told me that he heard noises whilst he was preparing for bed, but he did not look out to the window. For some unknown reason most of the dumping that has been taking place in Erith has been in the form of old and broken down furniture. One resident even joked with me that there was almost enough to set up a second hand home furnishings company! The sofa dumped in Manor Road itself mysteriously disappeared before the council appointed waste contractor could collect it. Ironically, it may be that someone has found a use for it and has upcycled it. The sofa located in Appold Street as shown in the photograph above was still where it had been dumped. There is a third sofa dumped at the bottom of Appold Street  at the junction with Wheatley Terrace Road. I would not be at all surprised if the same perpetrator was responsible for all three criminal dumping offences. What do you think? Email me at hugh.neal@gmail.com. 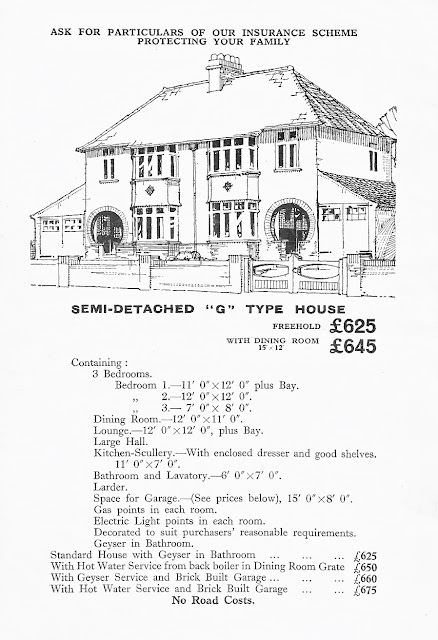 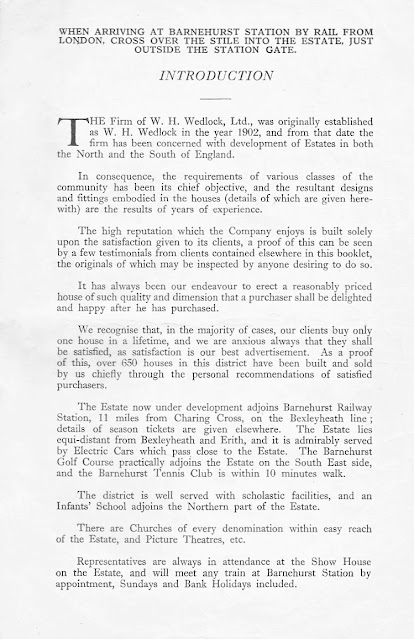 The graphics above were taken from a brochure published back in 1933 for various kinds of houses and bungalows that were being built at that time on what is now called the Mayplace Estate in Barnehurst. The Mayplace Estate was aimed at professional, middle class customers - this can be seen not only by the (for the time) relatively expensive prices of the houses on the estate, but by the fact many came with the option of a garage - only the wealthy owned cars in the 1930's. On top of this, the publicity material shown above mentions the Barnehurst Golf Club - which back then would only have been open to members of a certain social standing - doctors, solicitors, accountants etc. having said that, it was the first golf club in the country to admit women as members. The history of Barnehurst is long and varied. The story of Barnehurst begins in 1745, when Miles Barne the son of a wealthy London merchant married Elizabeth Elwick (died 1747) the only child of Nathaniel Elwick of May Place in Crayford, on whose death in 1750 Miles Barne inherited May Place and its large estate. The family retained May Place and the remaining estate until 1938, when it was sold to Crayford UDC for £24,500. The name Barnehurst, a combination of "Barne" - the landowner and "Hurst" - Saxon word for woodland, came into being when a name was required for a station being built in Conduit Wood, Crayford, by the Bexleyheath Railway Company on their new railway, opened in 1895, where it crossed the May Place Estate owned by Colonel Frederick Barne. At that time the area we know as Barnehurst was part of the Parish of Crayford, and consisted of a mix of farmland and market gardens, with apple, plum and cherry orchards,together with wood and parkland belonging to the estates of May Place, Martens Grove and Oakwood. The small population was concentrated along and to the south of Mayplace Road. The opening of the railway failed to attract the large scale house developers, and passenger numbers were small only boosted at weekends by golfers travelling to the new Barnehurst Golf Course opened in 1903. Its club house the old mansion of May Place was destroyed by fire in 1959. The electrification of the Bexleyheath Line in 1926 signalled the start of the large housing developments of the 1920s and 30s. The first builder J W Ellingham chose the prime site next to the station on which to build the "Barnehurst Estate" of 578 semi-detached houses selling for £600 each. Building started along Barnehurst Road (previously called Hills and Holes Road) in 1926. The Midfield Parade of shops followed in 1928 and the estate was completed in the early 1930s. The builders W H Wedlock Ltd played a major role in the development of Barnehurst. In 1926 W H Wedlock Ltd started building the Mayplace Farm estate based on Oakwood Drive. Their brochure offered a comprehensive range of house and bungalow designs at prices from £495 to £850. Their next development of Lyndhurst Road, Brantwood Road and Risedale Road started in 1929. Their roads on this and later estates are easily identified, being named after Lake District locations. By 1932 development south of the railway was well advanced and the developers had moved to the more difficult terrain north of the railway. W H Wedlock Ltd developed the Mayplace Estate between Erith Road and Barnehurst Avenue. The only new Public House, the Red Barn, was built by Arnolds of Chelmsford in 1936. To the east of Barnehurst Avenue, New Ideal Homesteads Ltd started work on their Barnehurst Park Estate. It was not until after the war that lands of the Normandy and Venners farms were developed. 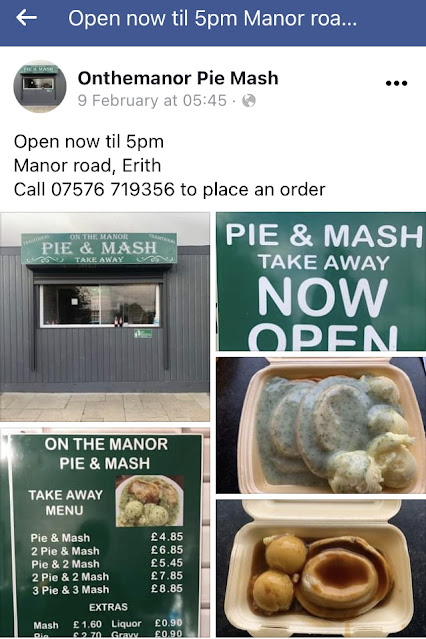 Following my recent article on the Pie and Mash shop in Albert Road, Upper Belvedere, I was contacted by a regular reader who told me that a Pie and Mash outlet had recently opened in Erith. The On The Manor Pie and Mash shop is located at the Eastern end of Manor Road in Erith, in what is the Anchor Bay industrial estate. The address is:- 1a Anchor Bay Industrial Estate. I am told that the food is supplied by Goddard’s Pie and Mash. There was a short lived Pie and Mash shop located within the Nemesis Gym in Erith Riverside Shopping Centre, but it only lasted a few months, for unknown reasons. *Update* I was informed by regular reader Cathy on Friday of a rather unfortunate development; the On The Manor Pie & Mash shop ceased trading on Friday of last week; I understand that the reason given for the abrupt closure was that the due to the sale of Anchor Bay industrial estate for redevelopment. The takeaway only opened in February of this year, making the venture one of the shortest running that I can recall in recent years,. Another question is raised; if the statement about the redevelopment of the Anchor Bay industrial estate is indeed true, just what is due to be built on the site? If you have any information on this, please Email me in confidence to hugh.neal@gmail.com.
I recall the hype and drama behind the launch of Windows XP back in 2001. I was invited to the UK launch at the Royal Festival Hall on the South Bank. I had managed to wangle a free ticket through work (being employed at the time by a multi - national blue chip company did occasionally have its perks). The event started with a film presentation with professional idiot and then Microsoft CEO Steve Ballmer on screen “WWE” style, bigging up the new OS and then saying how he regretted not being able to attend in person. Just as he finished this, when, also in a style reminiscent of "WWE" he ran down the aisle from the back of the stalls hollering and whooping like someone demented. I was sat at the end of a row, and he passed me within inches. If I had slightly better presence of mind, I could have stuck my foot out and sent him flying. Microsoft have released several versions of their desktop operating system since; the latest iteration is Windows 11, which came out last year. It would seem that despite a large amount of promotion and advertising, it is not very popular at all. In an article on technology news website "The Register" the problems with Microsoft and Windows 11 are outlined. An impartial third party version audit has Windows 11 on 1.44 percent of Windows machines surveyed. The long-dead XP and recently culled Windows 7 were on 1.71 percent and 4.7 percent respectively. Windows 8 only accounted for 1.99 percent while Windows 10 was installed on an impressive 80.34 percent of systems. "Although the rate of adoption is increasing bit by bit, it's obvious that Windows 11 upgrades aren't going as fast as Microsoft had hoped, especially within the business environment," said Roel Decneut, chief strategy officer at Lansweeper, the company charged with carrying out the version audit "Many organisations have been put off from having to buy new machines that meet these conditions, while others are simply happy with the current existence of Windows 10 which continues to be supported until 2025." With more than half of the devices surveyed incapable of a Windows 11 upgrade, thanks to Microsoft's stricter hardware requirements, customers would be forgiven for staying put. It is hard to imagine many enterprises doing a wholesale upgrade until Windows 11 has been out for at least year or so and had time to settle down. In terms of adoption trend, consumers are unsurprisingly ahead of businesses when it comes to Windows 11. The OS is headed toward 2.5 percent in terms of consumer share while barely passing 1 percent for business. I feel that the days of a new Windows release being something of an event seem to now be long over.
Following on from my earlier article regarding radio and the war in Ukraine, the end video this week is a short documentary on the way communications by Russian military and intelligence sources are being intercepted and analysed by a large group of amateur volunteers using open source software and hardware, and how this is affecting the course of the conflict. This is the first major war where civilian intelligence gathering has exceeded that of the conventional national organisations. The video makes for fascinating and informative viewing. Let me know what you think by Emailing me at hugh.neal@gmail.com.
Posted by Hugh at 11:15 am