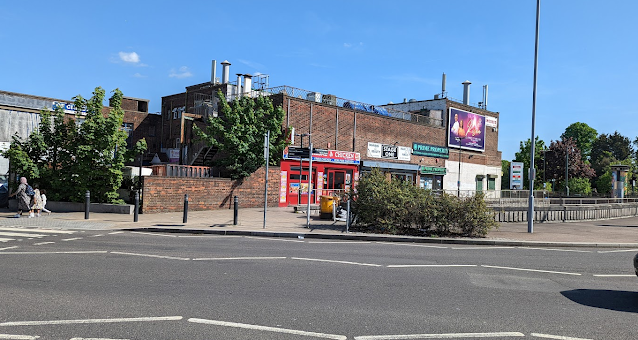 I have been in the unenviable position of knowing about a really interesting local story, but being unable to report on it, as it could have affected an ongoing Police investigation. I have been aware of the story for a couple of weeks - here are the details, as now it has finally published by the Metropolitan Police:- "Officers attended Bexley Road DA8 after a call to excessive electricity at the location. After forcing entry to the location officers found a huge and complex Cannabis factory consisting of 6 rooms full of mature plants ready for harvest and new seedlings. They quickly assessed that the setup of the factory was extremely sophisticated and due to the excessive electricity input there was a major hazard to safety. Officers arranged power network to attend and due to the complicated set-up they had to dig the road to make the scene safe. The professional assessment showed that had this not been discovered then there was a severe fire hazard and due to the hot weather this could have proved fatal. This was even more vital due to the fact that a nursery is situated above the location and there was living quarters identified inside the property. Upon collection of the plants which in itself spanned over 2 days, property services assessed that a current conservative estimate of the value of plants was in excess of £750,000. The investigation into the factory and associated potential offences is continuing". The building, known as Electricity House has had a very chequered recent history. A nursery called Bright Steps operated on the site for a number of years. It would appear that the nursery had been under performing for several years, and had refused to obey a series of previous compliance orders by Ofsted. The final straw seems to have been when in January 2018, a member of the public observed a member of the Bright Steps nursery staff smacking a child under their care. Subsequent to this, the nursery managers deleted CCTV footage of the assault, and tried to cover up the event when Ofsted and the Police then carried out an investigation. After a court case and an appeal, Ofsted removed Bright Steps licence to operate. After this forced closure, the nursery part of the building was advertised for rent, and nowadays another nursery completely unconnected with the banned Bright Steps operates out of the building. Comments to me at hugh.neal@gmail.com. 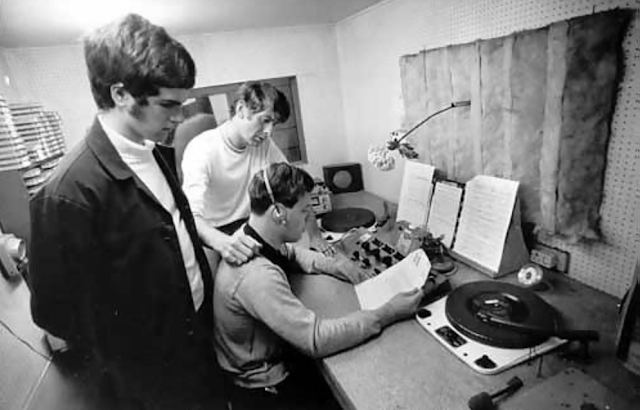 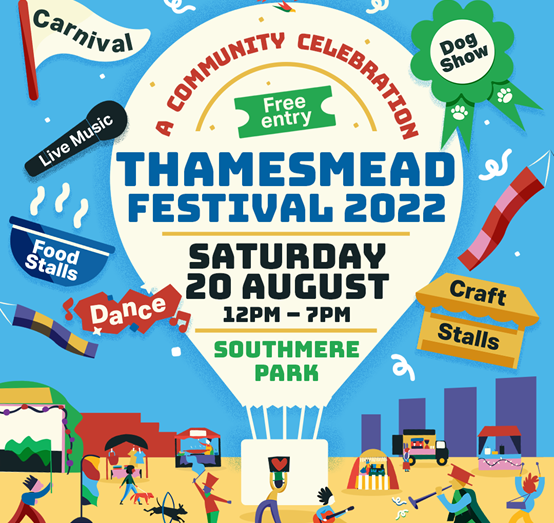 Post Covid lockdown, the Thamesmead festival will shortly be taking place. Here is an excerpt from the event's press release:- "This community-powered London festival returns to the iconic urban setting of Southmere Park this August, bringing together residents and visitors alike for a free celebration of all things Thamesmead. Organised by local people and with a programme packed full of home-grown talent, the day features live music, dance, performance, food and family activities as well as the much-anticipated annual dog show. Attracting more than 6000 attendees in 2021, this unique festival is fast-becoming a staple in the London cultural calendar and with the newly opened Elizabeth Line making transport to Abbey Wood that bit easier, Londoners are invited to come and see what Thamesmead has to offer. With confirmed acts including south London-raised singer Samm Henshaw and Britain’s Got Talent champions Twist and Pulse, this year’s event will see the return of its three main stages – the Park Stage, up on the hill; the Southmere Stage on Southmere Square and the more informal Unplugged Stage among the trees in Southmere Park – showcasing music, spoken word, dance, magic and comedy. The entire festival is programmed and led by the Festival Production Group, a committee of 14 residents representative of Thamesmead’s diverse cultures and neighbourhoods. Together with acclaimed cultural event producers Serious, they are working to deliver an ambitious showcase of local talent, having issued an open call that will serve as the basis for selecting the full line-up, scheduled to be announced later in the summer. The group is: Manny Adeneye, Samuel Aribisala, Joanne Bernard, Adedapo Dalley, Deborah Frimpong, Jules, Carolyn Long, Whitney Manassian, Pastor Bunmi Omidiran, Anne Poole, Ian Tyson, Jerusha Ujanga, Kim Vale and Jamie Zubairi. As part of a stellar line-up of talent, the festival will welcome back Thamesmead-based street dance group Dynamix for a special performance and Greenwich Dance, who recently relocated to The Nest community building, for their debut festival appearance. Vitally expressing the ethos and background of the Festival Production Group, dance forms an integral element of the programme, a medium through which many young people in the community have been able to tell their stories, with globally renowned Thamesmead-raised rapper ENNY recently describing how joining a local street dance group at just seven years of age helped shape an early interest in music. The festival will also feature community stalls run by local groups and charities, providing information about their work in the community, free workshops and activities for children and adults, and a mouth-watering menu of food and drink from across the world. This year’s offering includes Peter’s Panas serving the best Venezualan gluten-free arepas in London, tasty Jamaican eats from The Caribbean Hut, Nigerian cuisine from Yeti’s Authentic Kitchen and Bexley Mixology providing a refreshing selection of handcrafted mocktails. Other stalls include hand blended holistic pink Himalayan salt products from Pink Salt UK, Cool-Caricatures by local artist Femi and Deluxe Bubbles, selling bath bombs, soaps, scrubs and balms fit to pamper a king. As part of the day, a spectacular 25m high hot air balloon tapestried with stories from Thamesmead will be inflated and tethered on the festival site. The winning proposal for the Thamesmead Open competition, Fields of EveryWhen is a collaborative artwork by artists Neil Musson and Jono Retallick and the Thamesmead community. Created over the last two years, it weaves together stories by and about the people and places of Thamesmead, which have been converted into embroideries, textile collages and illustrations, then digitally enlarged onto the fabric of the hot air balloon to form a ‘floating gallery’ celebrating Thamesmead’s rich history, community and creative talent". 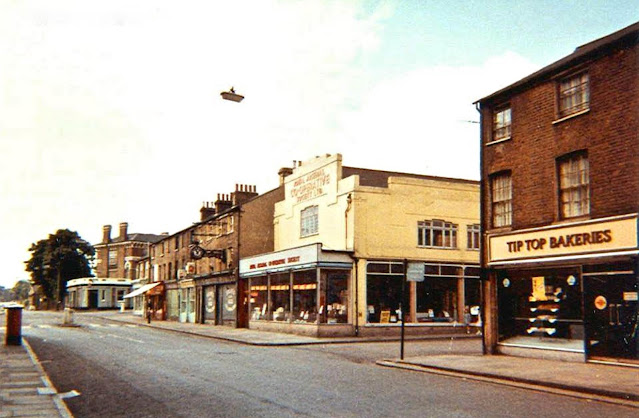 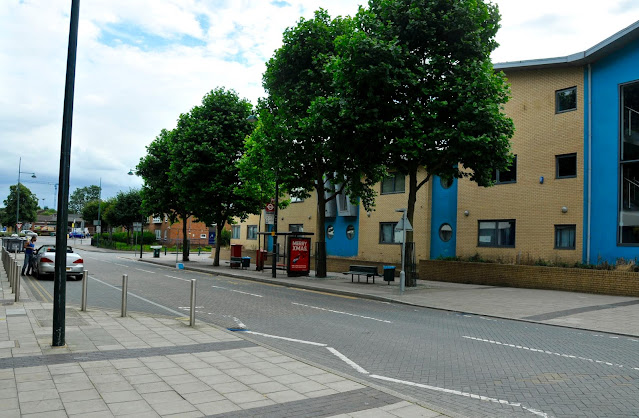 The upper of the two photos above was taken on the 17th July 1966; it shows Erith High Street. In the far left distance you can see the Prince of Wales pub, which was on the site of what is now the McDonald's drive through. The block of shops in the middle of the photograph is now the Sherwood House residential home, and the Tip Top Bakery was on the site of what nowadays is Erith Health Centre. The lower of the two photos shows (as close as possible) the same location exactly fifty six years later - and it could not really look any more different; nothing at all survives from 1966. If you have any photos of old Erith, please send them to me - I would like to re - photograph the same site so that "then and now" comparisons can be made. Contact me by Email at hugh.neal@gmail.com.
Two weeks ago I wrote about how a number of Hive branded internet connected devices such as smart doorbells were going to be going out of support, and would become effectively useless as a result. Since then, another issue has become apparent from another manufacturer of internet connected devices - the issue currently affects users in the USA alone, but as is usual with technology, it is only a matter of time before the problems crop up in the UK and Europe. Ring, the Amazon-owned video doorbell and home security company, came under renewed criticism from privacy activists this month after disclosing it gave video footage to police in more than 10 cases without users’ consent thus far in 2022 in what it described as “emergency situations.” That includes instances where the police didn’t have a warrant. While Ring stands alone for its extensive history of police partnerships, it isn’t the only name I found with a carve-out clause for sharing user footage with police during emergencies. Google, which makes and sells smart home cameras and video doorbells under the Nest brand, makes as much clear in its terms of service. Other manufacturers of home security cameras, such as Wyze and Arlo, only provide footage after a valid warrant, while devices that use Apple’s HomeKit Secure Video are end-to-end encrypted, so footage cannot be shared at all. In other words, if you live in the United States, it would be best to avoid Amazon’s and Google’s offerings – especially if you’re a member of a minority or are a woman seeking essential healthcare – and stick to Apple’s offerings instead. This as previously mentioned, currently only affects the USA, but this kind of issue is likely to crop up here, sooner or later.
The end video this week is a bit different; it features the late Bernard Cribbins in a short film promoting British Beer from back in 1972. The talented actor appears as several different characters explaining how beer ingredients are grown, and how beer is brewed. Thanks to Ian for suggesting this video. You can contact me as usual at hugh.neal@gmail.com.
Posted by Hugh at 12:15 pm