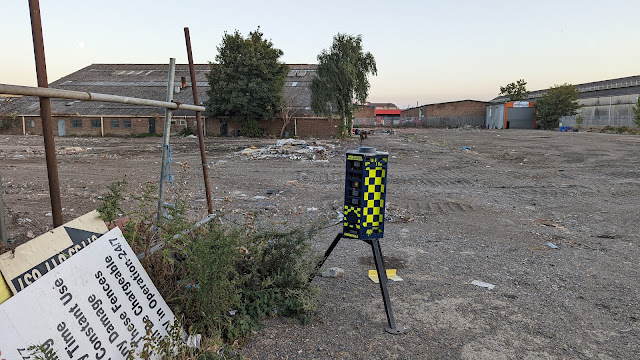 I was walking eastwards along the industrial section of Manor Road in Erith on Monday evening, when I noticed that what had been a large and sprawling industrial estate had been demolished. The area was flat earth. I have asked one local councillor as to whether housing is to be built on the site, but at present the future of the former industrial estate is somewhat unclear. What did grab my attention? Was it the security technology employed by the developer on the site instead of having a security guard patrolling with a dog? A number of security robots were deployed on the site, as you'll see from the photo above. Please click on it to see a larger version. The particular security robot in the photograph is known as a PID Armadillo. They are designed to deter trespassers and intruders to industrial areas and building sites. They are equipped with an array of sensors which can detect the presence of unauthorised persons in the vicinity of the robot. They can then issue warnings and in some cases even send an automated call to police and emergency services. The PID Armadillo has been around for a couple of years, but to my knowledge it is the first time that the high technology guarding system has been deployed within the London Borough of Bexley. The company that manufactures the Armadillo describes the product as follows:- "PID Systems is best known for its core product, the Armadillo VideoGuard 360 intrusion detection camera. Providing an industry-first security solution for instant deployment across a variety of asset protection assignments, we’re the market leader in temporary site security. These sectors include: Construction site security / Civil engineering site security / Utility sector security / Vacant property security / Retail security.The Armadillo VideoGuard 360 is our armoured, rapid deployment unit which features a fully encrypted loT visually verified operating system, with DM-Top loader matrix which enables ultrafast 3-4G data package uploads. VideoGuard 360® units work remotely, communicating via mobile networks with a built-in battery life of up to 4 years. Known for their prominent visual appearance, 360° viewing angle and vocal warning system, the Armadillo VideoGuard 360 deters thieves from breaking and entering into your site. Considered as one of the top crime deterrents in the country, our VideoGuard 360 units are more commonly known as robots for their imposing presence". Comments to me at hugh.neal@gmail.com. 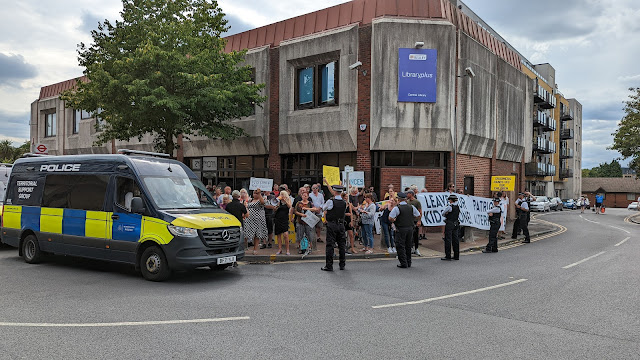 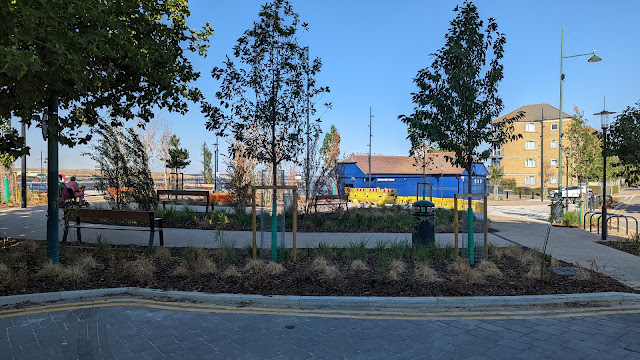 The drought has hit the new Pier Gardens project, adjacent to Erith Pier. The garden is going to need to have around half of the shrubs and trees replaced - some of which were already dead when they were planted. This is a great pity, as the garden could be nice - even if it was delivered over four months late - and some work still needs to be finalised, on top of the replacement of the dead plants.
This might sound like something really technical and irrelevant to the general public, but if it is not addressed in the correct manner, it could come back to adversely affect just about everyone. Power Line Telecommunications (PLT) is a technology that allows data to be transmitted over a standard domestic or business power grid – basically using the electrical wiring in a building to run a computer network. It can also be used to transmit data over longer distances using the national grid. This sounds absolutely great – whilst Wi Fi is good, it is limited in range and often has problems penetrating thick walls and structural steel beams. Running RJ45 Ethernet cable can be a problem in a domestic or small business environment. So if an option becomes available to use the power line infrastructure to carry the data, it would seem to be a win / win scenario. Except that it is not. The adaptors that inject the data signal into the power lines also generate RF (Radio Frequency) signals, which then propagate via the cabling – which acts as an antenna - some PLT systems have effective filtering to minimise this, but many do not. Radio Hams have been complaining as their particular set of H.F radio frequencies (1.8 to 30MHz) are one of the worst affected with radio interference. Well, you may think, who cares if a small bunch of beardy anoraks suffer from a bit of interference?  The trouble is several fold. The H.F bands are not just home to Hams, but are shared with aircraft, ships at sea, the military, diplomatic services, as well as international shortwave broadcasting stations, the number of which is currently increasing to broadcast to Ukraine and Russia regarding the illegal Russian invasion. Any interference to these services can potentially lead to risk to life. In the event of natural disaster, radio is one of the few methods of communication that will get through when the normal infrastructure is damaged or out of commission. It just seems that OFCOM are pretty toothless when dealing with any threat to the radio spectrum – they certainly don’t have the appetite for a fight that the old DTI Radio Investigation Service had – I should know, they tried to feel my collar on a number of occasions, when I was still a poacher, rather than a gamekeeper now. The Power Line Telecommunications radio interference story looks like it will run and run. 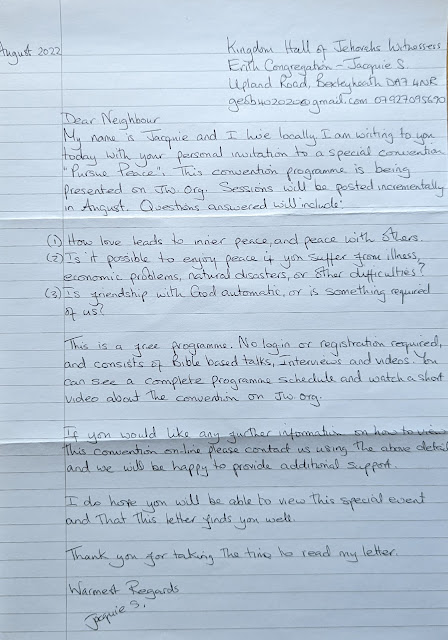 I originally wrote at some length about the following phenomenon back in February; coincidentally the practice seemed to tail off not long afterwards, only to begin again recently. Have you recently received an unexpected letter through your front door that was addressed to "dear neighbour" or "dear friend"? If so, this is part of a process that began in the USA, and has now spread to the UK. Due to the COVID-19 restrictions that we have all undergone over the last couple of years, a number of organisations have taken to promoting themselves in what we might consider to be old-fashioned methods. The letters that I am referring to are written by hand and posted by members of the Jehovah's Witnesses. They rationalise that as they are unable to go door to door preaching, or handing out leaflets in the street as has been their practice for many years, they are reverting to traditional postal letters to individuals. Jehovah's Witnesses are best known for their door-to-door preaching, distributing literature such as The Watchtower and Awake!, and for refusing military service and blood transfusions. They consider the use of God's name vital for proper worship. They reject Trinitarianism, inherent immortality of the soul, and hellfire, which they consider to be unscriptural doctrines. They do not observe Christmas, Easter, birthdays or other holidays and customs they consider to have pagan origins incompatible with Christianity. The Jehovah's Witnesses seemingly target random addresses, though on occasion, they have been known to send handwritten letters to every house or apartment in a street. I received the letter above in the post on Tuesday morning. I must admit seeing an envelope with a handwritten address on it surprised me, as I'm pretty sure that I don't know anybody who sends handwritten letters nowadays - actually I do know one person but that is a story for another time. I would guess that for many people seeing a handwritten address on an envelope would very much encourage them to open and read the contents, as they were probably think it was from an old friend. I have heard many reports that recipients of these letters have been shocked and worried when they read the letter inside, whilst the exact contents of each letter can vary, they all share similar themes. Similar themes. The writer of the letter usually refers to the COVID-19 pandemic being as a result of not obeying God's will, and that the letter recipient can only become immune from the infection by joining the Jehovah's Witnesses, or similar claims. It has been the case that recipients of these handwritten letters are concerned as to how that Jehovah's Witnesses got got addresses. It would appear that they are not using the electoral register or other database, as whilst the letters have an address, they do not have a personalised recipient name. They are merely addressed as "dear friend" or "dear neighbour". What is also interesting is that the people that are writing these letters must put a huge amount of effort into it. Each letter is usually an A4 sheet of paper completely filled with writing; these letters are not photocopied or printed, they are completely handwritten - each letter would take 20 to 30 minutes to write. This is a huge level of time, investment and dedication by the writer. I am not aware of any laws being broken by the Jehovah's Witnesses in writing and sending these letters, but it does strike me that vulnerable individuals may well find receiving such a letter to be stressful and worrying. Personally, I am of the opinion that people should be able to do, think and believe pretty much anything that they wish to with the caveat that they do not cause harm, irritation or distress to others. I find the Jehovah's witnesses to be somewhat curious, but essentially I feel that they should be allowed to do what they wish to do. My concern is when they evangelize and try to influence people from outside of their group. If they were to keep themselves to themselves, I would think them a bit bonkers, but entitled to their beliefs. The fact that they are so intrusive in their evangelising causes me much concern. I'm certain I'm not the only person with this opinion. The fact that the church is now using this rather old-fashioned method of communication does strike me as somewhat odd. How successful this letter writing campaign will actually prove to be is currently unknown. What do you think of this? Have you received a handwritten letter? Do let me know by emailing me at the usual address - hugh.neal@gmail.com.
The end video this week is a short, time lapse film that follows the recently introduced 180 bus route, from its starting point opposite the entrance of The Quarry housing estate in Fraser Road, Erith, to its termination point in North Greenwich. I would however strongly advise that you turn the sound down, or remove your headphones when watching the video, as the choice of accompanying music is in my opinion somewhat less than optimal.
Posted by Hugh at 1:00 pm