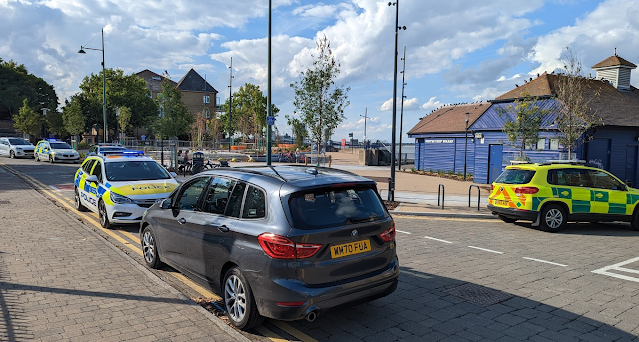 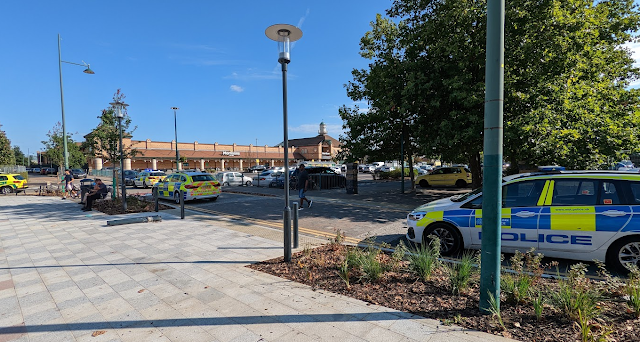 I took the photos above yesterday afternoon at around 4.30pm. The emergency services had been called to what was judged to be a major incident on Erith Pier. Numerous marked and unmarked Police cars, along with two ambulance cars and a full ambulance were in attendance. I spoke to one of the ambulance staff, and she told me that there had been someone in the River Thames apparently after falling, or jumping from the pier. I was told that the person had been rescued, and was apparently OK. I also gathered that the person was being examined in the back of the ambulance parked on the pier - as seen in the upper of the three photographs above - click on any one to see a larger version. I did not approach the ambulance and left the emergency workers to complete their work. Historically, there have been a series of incidents on both the pier itself and the wooden jetty that runs adjacent to it. At the time of writing I have no idea if yesterday's incident was an accident, or an attempted suicide, and I will not speculate. Either way I am wondering if a few discreet signs on the pier, with contact numbers for the Samaritans might be a good idea? This has already been done in suicide hot spots like Beachy Head. It would not cost very much to do, and could end up saving a life. It might have helped back in March 2011, when a young man had a blazing row with his girlfriend, then threw himself off the end of Erith Pier. The undertow and currents around Erith Pier are extremely strong; I understand that life expectancy for anyone in the river is measured in minutes at best. Anything that can be done to stop this happening has got to be welcomed. What do you think? Please Email me at hugh.neal@gmail.com. 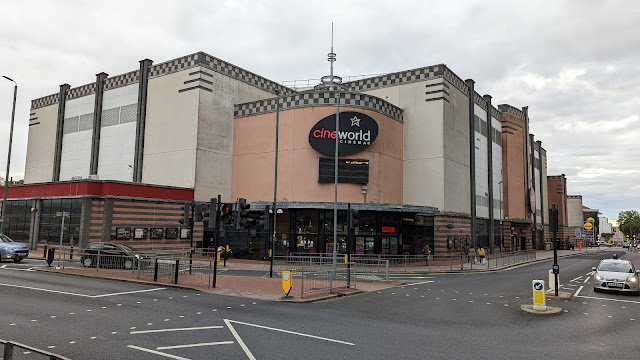 It now seems increasingly likely that the Cineworld cinema in Bexleyheath - photo above, click on it to see a larger version - will be closing in the near future, unless a buyer can be found for the giant cinema chain. The company is rumoured to be filing for Chapter 11 bankruptcy protection in the USA, and it is feared that the UK operation may follow soon. The Wall Street Journal reported that the cinema chain was ready to file for bankruptcy while continuing to struggle with low attendance amidst its $5 billion worth of debt. As a result, the firm's shares reportedly plummeted more than 60%. The company is UK based, but has outlets internationally. In the UK Cineworld are saying that they are running business as usual -"All of our Cineworld cinemas are open for business as usual, and we continue to welcome Cineworld Unlimited members and all of our customers, across the UK and Ireland. We remain committed to being the Best Place to Watch a Movie," their statement reads. How this may change in the future is currently unknown.
Many people get targeted by cold callers; some of these want to try and sell you compensation services for mis – sold personal loan insurance, or the classic silent call that comes from an automated call centre somewhere obscure and outside of Europe. The big threat nowadays is from what is known as virus call centre scammers.  You may receive a call out of the blue from someone purporting to be from Microsoft, telling you that your computer has a serious virus and that they have detected it remotely. If you go along with this (and many do, not realising that neither Microsoft or Apple will phone users directly) the scam will proceed along these lines. The caller will tell you that your computer has been remotely detected with a number of serious virus infestations. The caller instruct you to download a remote access tool such as PC Anywhere. The caller will then get access to your Windows PC and start the event viewer utility, saying that a number of the event viewer notices are warnings of a virus infection; at this point the caller may well also tell you that your Windows activation key is invalid and has expired. The caller will then offer to “re- activate” your Windows installation for a fee of £160, payable annually, as part of their “software loyalty programme”. All of the above is utter tosh, and completely fraudulent. The scammers are trying to create FUD (Fear, Uncertainty, Doubt) in the person on the other end of the phone line. These calls are coming mainly from organised fraudsters in India, who have industrialised this phone based crime with large call centres targeting people in Europe, the USA and Australia. Investigations are ongoing as to who the master minds behind this activity are, but in the meantime, don’t believe anyone who phones you saying that you have computer problems – just put the phone down. If you have any questions or concerns, get in contact with me for advice – hugh.neal@gmail.com. 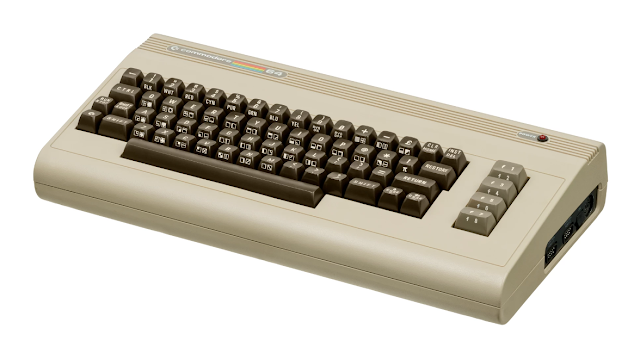 The Commodore 64 home computer celebrates its 40th birthday this month. The C64, sometimes referred to as the beige bread bin was the largest selling 8 bit home computer of all time. the C64 was built for gaming. Unlike the Sinclair Spectrum and BBC Micro, which became good games machines almost by accident, the C64 was spun out from a blue sky project to devise a state-of-the-art gaming console. This is obvious if you look at the C64’s video and sound chips.The VIC-II video chip was the successor the original VIC chip found in Commodore’s first colour computer, the VIC-20. The new chip was more capable, outputting 40x25 characters and 320x200 pixels. Crucially, it introduced advanced features designed with gaming in mind, including hardware sprites, collision detection and smooth scrolling. In fact, around 75% of the chip’s surface area was dedicated to its sprite functionality, showing how integral it was to the overall design.The VIC-II and SID chips were finalised in 1981, but the console plans were soon abandoned and the new technology was instead earmarked for Commodore’s successor to the VIC-20. To keep production costs and development time down, the new computer borrowed quite a bit from the VIC-20, including a similar 6502-family 1Mhz CPU, the same version of BASIC, and most obviously, an almost identical keyboard and dowdy beige case. By the time the new computer made its debut at the Consumer Electronics Show in January 1982 it had been officially titled the Commodore 64, on account of it coming with 64K of memory.The C64 was both capable and affordable, relative to rival machines, and this proved to be a winning formula when it started shipping in August 1982. Worldwide sales hit 2 million in 1983 and rose to 2.5 million the following year. Creative Computing said in December 1984 that the 64 was "the overwhelming winner" in the category of home computers under $500. Despite criticizing its "slow disk drive, only two cursor directional keys, zero manufacturer support, non-standard interfaces, etc.", the magazine said that at the 64's price of less than £200 "you can't get another system with the same features: 64K, colour, sprite graphics, and barrels of available software". By the end of the 80s it would have surpassed 13 million units on its way to being crowned the world’s biggest-selling single computer model. It still holds the record for the best selling 8 bit computer, but the absolute record for the biggest selling single computer model is now held by the Raspberry Pi. In Europe, the primary competitors to the C64 were British-built computers: the Sinclair ZX Spectrum, the BBC Micro, and the Amstrad CPC 464. In the UK, the 48K Spectrum had not only been released a few months ahead of the C64's early 1983 debut, but it was also selling for £175, less than half the C64's £399 price. The Spectrum quickly became the market leader and Commodore had an uphill struggle against it in the marketplace. In April 1994, the company filed for bankruptcy. When Commodore went bankrupt, all production on their inventory, including the C64, was discontinued, thus ending the C64's eleven and a half year production. Claims of sales of 17, 22 and 30 million C64 units sold worldwide have been made. Company sales records, however, indicate that the total number was about 12.5 million. Based on that figure, the Commodore 64 was still the third most popular computing platform into the 21st century until 2017 when the Raspberry Pi family replaced it. While 360,000 C64s were sold in 1982, about 1.3 million were sold in 1983, followed by a large spike in 1984 when 2.6 million were sold. After that, sales held steady at between 1.3 and 1.6 million a year for the remainder of the decade and then dropped off after 1989. North American sales peaked between 1983 and 1985 and gradually tapered off afterward, while European sales remained quite strong into the early 1990s. 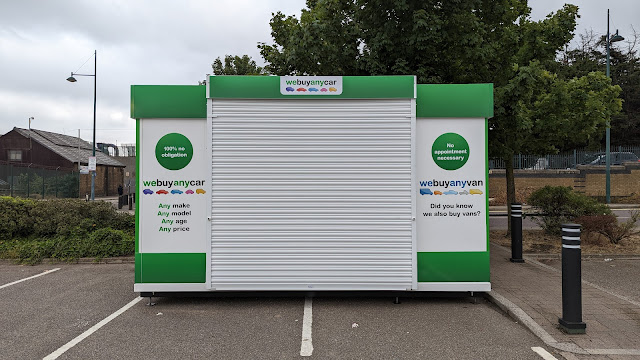 The structure above mysteriously appeared in the car park of Erith Morrisons early last week; to date I have yet to see any activity - I presume the temporary building will be a car drop off point for people wishing to dispose of their vehicle with "We Buy Any Car". If anyone has any information, please let me know.
The end video this week has a connection to my first story; the short film shows some seals on the river bank close to Erith Yacht Club. Seeing seals locally is a very good indicator of the health of the Thames at Erith; Seals are what is known as an Apex Predator - they are the top of the food chain. If they are present and healthy, then the fish they hunt and all of the creatures lower down the food chain must also consequently be in good health. Ironically there has been at least one occasion where a seal swimming in the Thames adjacent to Erith Pier has been incorrectly identified as a person in the water - with the result of a false alarm for the emergency services. Email me at hugh.neal@gmail.com.
Posted by Hugh at 11:45 am