Following my recent article on the forthcoming removal of the train service on the North Kent Line which terminates at Charing Cross - and how in future if travellers in the local area who wish to get a train into London, they will have to go to London Bridge and change to end up at Charing Cross, as all services will only terminate at Cannon Street from December, I received the following press release from the Bexley Labour Party, which I reproduce in full, for your information:- "This week South-eastern has announced, without any prior consultation, several significant timetable changes to train services running on all 3 railway lines running through the London Borough of Bexley. Many residents have contacted Councillors and local MPs concerned at the lack of communication with users and stakeholders or any consultation on these significant changes and their impact on the travelling public. At present, none of the railway stations have any publicity surrounding these proposed changes and Bexley Labour has urged Southeastern to start a meaningful consultation before any timetable changes are initiated. Of concern to many residents are the following changes to services in Bexley; Withdrawal of all Charing Cross services on the Greenwich and Woolwich line. Withdrawal of all off-peak and weekend services to Charing Cross on the Bexleyheath line. Withdrawal of the round-the-loop service to Cannon Street on the Sidcup line and the Woolwich line. Downgrading of Albany Park station. Councillor Mabel Ogundayo (Thamesmead East), Labour group spokesperson for Environment, Transport, leisure and Climate Change said “With the Elizabeth line providing an excellent service to Abbey Wood, Southeastern has decided to remove a valuable transport link between the North and South of the borough, which leads to more people driving and causing more congested streets in Abbey Wood and Thamesmead, I urge South-eastern to reconsider this short-sighted decision.” Councillor Stefano Borella (Slade Green and Northend ward, leader of Bexley Labour Group) said “I am appalled by the lack of any communication with users and stakeholders and the no consultation on these proposals to gauge public opinion, I am concerned at the downgrading of Albany Park station and the lack of any assessment of the impact on mobility impaired passengers and how they can access train services". Bexley Labour has written to Southeastern, requesting a meeting regarding the cuts and the impact it will have on Bexley residents. We will also be writing to the Secretary of state for Transport to insist that Southeastern undertake a consultation immediately as these changes are a significant alteration. Funding cuts from the Conservative government has meant that services are being reduced overall and it is clear from this latest debacle that this government is managing their failed franchising experiment and that the railways should be brought back into public ownership in the interests of the travelling public. Should there be no further intervention from the government, the timetable changes will come into place from December 2022". What do you think? Send your comments to me at hugh.neal@gmail.com. 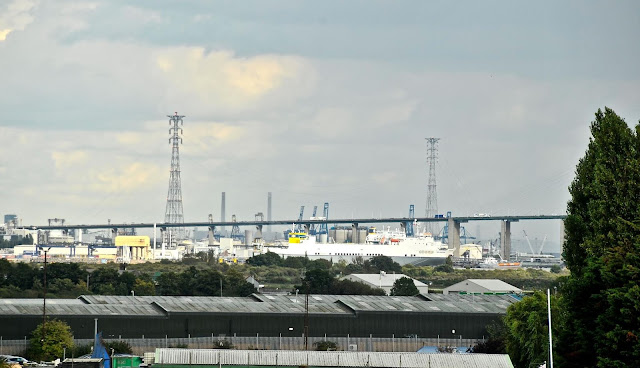 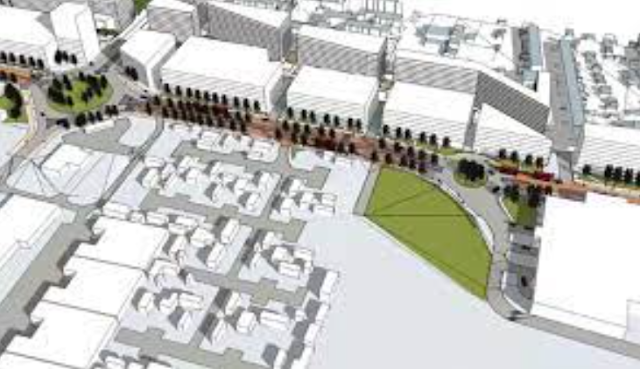 It would seem that a large portion of the Eastern side of Thamesmead is shortly to be redeveloped. The area in an around Harrow Manorway in Thamesmead is owned by the Peabody Housing Association; plans have been submitted to Bexley Council for the demolition of 596 houses and flats, along with 253 disused garages to make way for a total of nearly 2,000 new apartments, some new shops and refurbishment to the existing Abbey Way park. Some local residents have objected to the plans, saying that redevelopment would lose the character of the area. I find this a little surprising – for many years Thamesmead residents have complained about the lack of investment in the area, and the lack of facilities. Whilst I understand that resistance to change is understandable, the new objections are somewhat surprising. Many of the properties in the vicinity of Harrow Manorway are constructed of concrete, and thus have a finite life – this is one of the reasons why it is very difficult or totally impossible in some circumstances to get a mortgage on a concrete house. These properties were mostly built in the late 1960’s or early 1970’s and are coming close to the end of their life cycle in any case. Concrete apartments and houses are relatively cheap and quick to build, but they don’t last forever. Secondly, the complaint about the loss of character strikes me as somewhat surprising – many residents have historically complained about parts of Thamesmead being a concrete jungle, and until relatively recently, I think many people would be inclined to agree. 35 per cent of the new homes will be “affordable”, with plans for this figure to rise as high as 57 per cent. The development is part of a wider project by Peabody for the Thamesmead area, with plans for 1,849 flats to be completed by 2034. One of the problems with Thamesmead as a whole, is a lack of coordinated public transport infrastructure. As part of the redevelopment project, Peabody will make a £270,000 contribution to Transport for London to improve the bus service in the area. What do you think? Email me at hugh.neal@gmail.com. 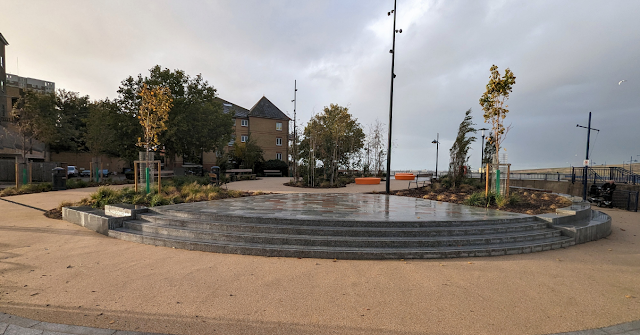 After extensive delays, wrong building materials being delivered, a change of contractor and plant deaths due to not being watered during the summer heatwave, Erith Pier Square is finally complete. Click on the photo above to see a larger view of it.
The following announcement was made by the Metropolitan Police and published by Bexley Borough Neighbourhood Watch Association:- "A two-day operation saw 17 stolen vehicles recovered and 14 arrests made as more than 60 officers came together to tackle a rise in motor vehicle crime causing concern to local communities. Operation Huntsman was a large cross border operation involving officers from the Met and Kent Police using Automated Number Plate Recognition (ANPR) technology to track down offenders. A total of 15 vehicles were also seized and 16 traffic offences reported during the operation. The arrests were made for suspected offences including robbery, theft of a motor vehicle, possession with intent to supply class A drugs, dangerous driving and failing to stop for police. Among the stolen vehicles recovered were a BMW, a Jaguar and a delivery van containing parcels. Several weapons were found including knives, a baseball bat and a stun gun. The operation built on the work of a new motor vehicle crime unit set up by the Met’s South East Command Unit a year ago. This followed concerns raised by Bexley, Greenwich and Lewisham residents around motor vehicle crime with more than half of local ward panels choosing this as a priority issue to tackle. The area has seen a rise in offences, particularly high value keyless car thefts and catalytic converter thefts. Last year there were 2,608 vehicle thefts in Bexley, Greenwich and Lewisham. In the first nine months of this year, almost 300 of one make of vehicle alone were stolen from Greenwich, Lewisham and Bromley, and Dartford and Sevenoaks in Kent. Of 4,606 offences of theft from a vehicle, 18 per cent were of catalytic converters. Many of these have been violent offences with gangs arming themselves with baseball bats, iron bars, machetes and more recently BB guns. As well as stealing cars to sell on, either complete or for parts, offenders also use the vehicles to commit other crimes. Officers have spent the last year gathering information about individuals and organised crime gangs and carrying out a range of operations. These have concentrated on violent criminals using the road network and motor vehicle thieves who cross the Met/Kent border to commit offences. Successes include in February the recovery of a pistol, silencer and 11 rounds of ammunition linked to the theft of a high value car in Bexley. Chief Inspector Russ Joao, from South East Command Unit, said: “We’ve really listened to what local people have been telling us they are concerned about. The rise in motor vehicle crime has had a big impact on the lives of many of our residents and we’ve taken significant action over the last 12 months to tackle this issue. “Alongside our new proactive unit working day in and day out, Operation Huntsman allowed us to work with colleagues in Kent Police to actively target offenders with some great results. Our work does not stop here and there will be more operations in the future as well as crime prevention initiatives, such as catalytic converter marking events, to help people avoid becoming a victim of this type of offence.” The operation on 28 and 29 September involved officers from Met local policing teams, the Roads and Transport Policing Command, the Violence Suppression Unit, ANPR Interceptor teams, the National Police Air Service and Kent’s Swanley Community Policing Team. Also invited to see the operation were the chairs of Sidcup and St Mary and St James ward panels so they could let their local communities know the action being taken to tackle the issue. The operation focused on the areas south of the A2 to north of the A20 and the A2 Bexley Village North through Crayford and up to Slade Green and Erith. Of those arrested, two have been charged with more minor offences and the remainder released under investigation or bailed while enquiries continue. Here's what you can do to help keep your vehicle safe:- Always leave your car locked and secured. Lots of modern vehicles fold in their wing mirrors when locked – so very easy for thieves to spot when a vehicle has not been locked. Take valuables with you when you leave the vehicle. Consider investing in steering wheel locks, pedal locks, immobilisers and tracking devices. Key fob protectors (Faraday bags) help prevent keyless car thefts. Consider installing driveway posts. Visit the Secured by Design website for more information – https://www.securedbydesign.com/guidance/crime-prevention-advice/vehicle-crime. We're investing in what we call 'precise community crime fighting' - involving communities in our decisions to tackle issues that matter to them".
Finishing this weeks' Blog update in the same way that it started - with an end video featuring the comings and goings of trains at Erith Station; if the changes in scheduling do go ahead, this video could end up being somewhat of a historical record. Let me know what you think - email me at hugh.neal@gmail.com.
Posted by Hugh at 12:30 pm