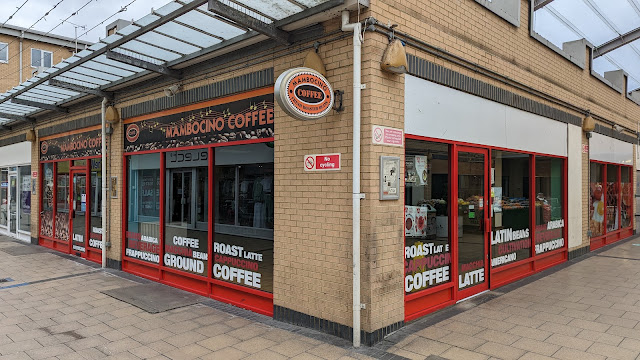 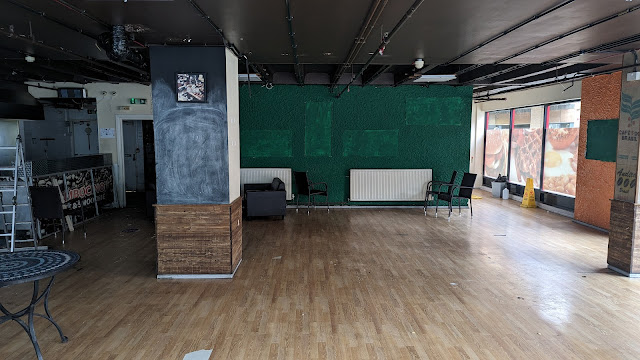 I have to say a big thank you to all of my readers who have supplied information about the closure of the Mambocino coffee shop and cafe and the situation with the Erith Riverside Fish and Steak Restaurant. It would appear that there has been much activity going on behind the scenes. I have now evidence to support my previous claims of the closure of Mambocino as you will see from the following links. You can read the details of the winding up and closure of Mambocino - which used the trading name Gastro Trading Erith Ltd by clicking here. Similarly you can read the details of the financial history of Erith Fish and Steak Restaurant - which uses the trading name of E.V.A Riverside Ltd by clicking here.  All information comes from the UK Government Companies House website, and was sent to me by several readers. Mambocino has now gone into voluntary liquidation. It was trading with no profit from almost the time when it first opened back in 2013. It is a great pity that what was a good cafeteria come coffee shop never already made a viable profit, and it closed with a considerable loss to creditors. To be honest, now that we now know the truth behind the organisation, it is a surprise that it operated for as long as it did before going bust. I feel very sorry for the employees who now have no work, and the regular customers who are now without a favourite place to have lunch. What I have also discovered is that the Erith Riverside Fish and Steak Restaurant is now no longer operated by Gurhan Mustafa. He transferred ownership of the restaurant last year to a lady by the name of Edita Jonaityte, who I believe was at one stage a waitress in the restaurant. She is now the owner and sole director of the place, although strangely Gurhan Mustafa is still working behind the counter. It is now back open during the daytime, but appears to close in the evening and seems to rely almost solely on takeaway trade. I have serious concerns about how the place will have a long term future, as its original intent to be a sit down, dining in restaurant. If things carry on as they currently are, I do not see a future for the Fish and Steak Restaurant. I really hope that she can turn around the business, but as things stand, I feel that this is somewhat of a remote possibility. The overall future of Erith Riverside Shopping Centre still appears to be in doubt. I hope that the operators of the centre can find new tenants. Without this, the whole place has a somewhat dim future. I would like to add that I have seen comments on social media saying that the shopping centre is to be demolished and replaced with accommodation, mainly flats. This is in fact incorrect; there are however plans to construct new apartments adjacent to the Erith Riverside Shopping Centre on what is now Pier Road and the Pier Road car park, and possibly the Erith Construction offices in what formerly was Erith Job Centre in Queen Street, but to my knowledge there are no plans to demolish the Erith Riverside Shopping Centre. Unfortunately some people tend to believe what they read on Facebook without any critical analysis. If they were to do some proper research they would realise that a lot of these stories are just pure wish fulfilment / scare mongering, and have no basis in reality. One bonus if the new accommodation development takes place is that the old and rather unsightly Electricity House would be part of the demolition works. Please send comments, updates and feedback to me at hugh.neal@gmail.com.

As expected, Bexley Council have taken a position against the expansion of the ULEZ to include outer London boroughs. A statement issued by them on Friday reads:- "Coalition of London boroughs insist Mayor supplies ULEZ expansion evidence. A growing coalition of London councils has written to the Mayor of London insisting on more evidence for his ill-conceived ULEZ expansion plans that stand to cause misery and chaos for residents and visitors to the outer boroughs. The London boroughs of Bexley, Bromley, Harrow and Hillingdon are requesting the Mayor demonstrate the lawfulness of the proposals and the data behind them. Until they have seen compelling evidence to the contrary, it remains the councils' position that the scheme will not translate successfully to outer London boroughs and that the negative impact to local households and economies will far outweigh the negligible air quality benefits". 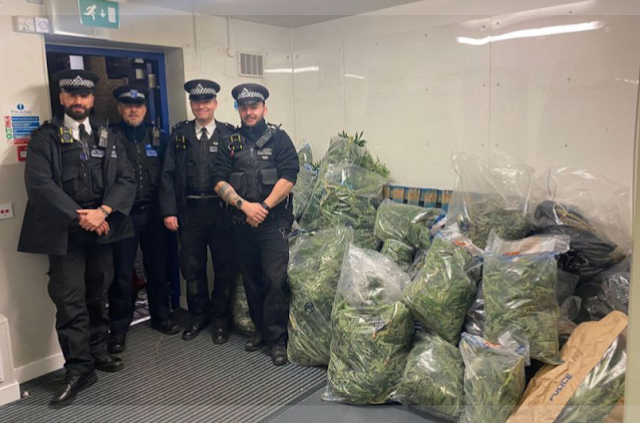 A major drug factory has been busted by local Police. The factory was located in a property in Nuxley Road, Upper Belvedere (NOT Nuxley Village - no such place exists). Belvedere Police posted the picture above - click on it to see a larger view - to their Twitter account, celebrating the 'win' and ensuring the public that the product would be destroyed. The four officers can be seen posing next to their enormous collection of bags. Some of the bags are so large that they are almost the same height as the officers stood next to them. The officers had managed to seize the goods after locating a large cannabis factory in Nuxley Road and the stash is reportedly worth thousands of pounds. The team commented online:- "Great Friday and Saturday Late shift for Thamesmead and Belvedere Safer Neighbourhoods Teams, who have caused some serious damage to the local drug supply chain. On Friday 6th of January officers stopped and searched a male in Thamesmead who was found with a quantity of drugs and over £2000 suspected to be his day’s earnings. The male was arrested for possession with intent to supply and breach of court order. The cash was seized and we are now making financial enquiries to ensure this is retained. On Saturday 7th of January officers continued their proactive campaign when they discovered a large cannabis factory in Belvedere worth thousands of pounds. The property had sustained severe damage and was in a dangerous condition due to the electricity meter being bypassed. This type of activity is a major catalyst fuelling violent crime so we will continue taking out these offenders". 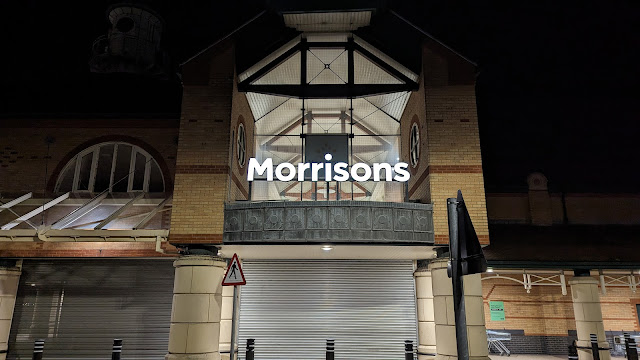 The woes at Erith Morrison's continue. Staff have told me in confidence that further cost - cutting measures including switching off some of the store overhead lights and turning down the heating have done much to lower morale that was at rock bottom already. It is now well known amongst staff that a further round of redundancies are to happen soon. Morrisons was the major loser among British supermarkets over Christmas as shoppers flocked to rivals. In a bruising setback for its private equity owners, industry figures showed sales at the Bradford-based grocer fell 2.9 per cent to £3.1 billion in the 12 weeks to December 25.The scale of the slump raises fresh alarm over the direction of Morrisons since its £7 billion takeover by US buyout firm Clayton, Dubilier & Rice (CD&R) in 2021. Morrisons raised prices more than any other major supermarket last year leading to an exodus of shoppers, a report reveals. The beleaguered Bradford-based grocer began ‘rapidly’ hiking prices in June, causing it to lose more shoppers than rivals in 2022, credit rating agency Moody’s said. It was in sharp contrast to rivals with soaring prices and robust demand sending total grocery sales to a record £12.8 billion in the final four weeks before Christmas, up 9.4 per cent on the same period a year earlier. The report by business analysis and consulting company Kantar showed Morrisons’ traditional rivals Tesco, Sainsbury’s and Asda fared far better. Tesco, Sainsbury’s and Asda’s sales jumped by more than 6 per cent. The German discounters Lidl and Aldi were again the fastest-growing supermarkets as they lured hordes of cash-strapped families.  Aldi, which last year overtook Morrisons to become the fourth-largest grocer in the UK, also raked in sales of £3.1 billion in the 12 weeks to Christmas Day. That was up 27 per cent on the same period a year earlier. Morrisons now commands just 9.1 per cent, down from 10 per cent before its £7 billion takeover by US private equity outfit CD&R but up from 9 per cent a month ago. It is struggling under the weight of a £6 billion debt pile, built up to finance the takeover. In an interview with the Daily Mail last month, former Morrisons director Paul Manduca said founder Sir Ken Morrison would be ‘rotating in his grave’. CD&R bought Morrisons in a deal orchestrated by former Tesco CEO Sir Terry Leahy, who is an adviser for CD&R. The deal was opposed by MPs and senior City figures. Industry experts have branded the takeover ‘at best a distraction, and at worst a disaster’. Hargreaves Lansdown analyst Susannah Streeter said: ‘Morrisons has struggled to regain its lost footing. While the discounters have roared ahead, devouring market share as shoppers seek refuge in value amid the cost-of-living storm, Morrisons has struggled to regain its lost footing. ‘It seems Morrisons has had little wriggle room to slash prices in the same way as its rivals.’ In contrast to the struggling Morrison's company, its rival Aldi has hailed record Christmas sales with a 26 per cent rise in sales after its own versions of chocolates, crisps and alcohol proved popular among shoppers. The discount supermarket has revealed that sales reached £1.4 billion in the UK and Ireland for the first time in December as many families opted for Christmas on a budget amid the cost-of-living crisis. Festive favourites such as Ballycastle, Aldi's dupe of Bailey's liqueur, along with Jacobs Crackers and its own gin boosted stores over the festive period. Aldi offers a number of alternative, often far cheaper versions of big brand items. Aldi, which has around 990 stores, highlighted strong sales of fresh meat products with poultry and pork up 28 per cent for December. It also recorded an near 30 per cent jump in sales of chilled desserts, while cheese also increased by around 50 per cent. Meanwhile, snacks such as crisps and nuts were up more than 40 per cent as the World Cup in Qatar coincided with the run-up to Christmas for the first time. It comes months after Aldi overtook Morrisons as the UK's fourth-largest supermarket as sales continue to grow, with trade supported by increased demand from customers keen to cut costs amid soaring energy bills and high inflation. What do you think? Please email me at hugh.neal@gmail.com. 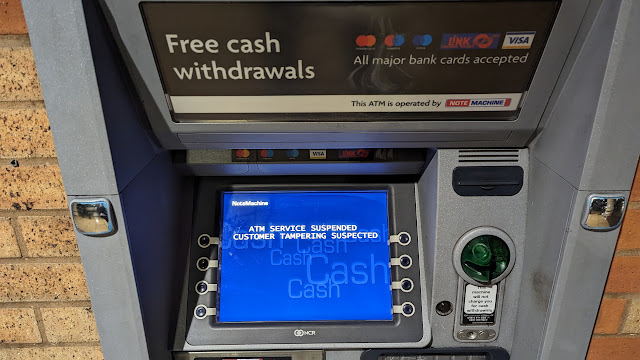