A gas mask, Mormons and a music video. 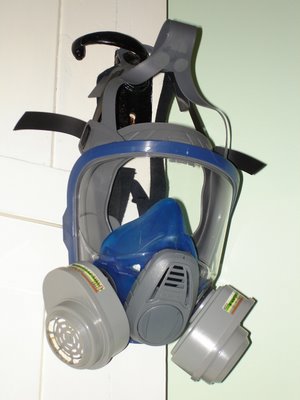 You may have read in the local papers or watched on the news about the large fire on the Slade Green industrial estate at the end of my road last week; It was pretty worrying whilst it was going on; I did have a Fire Officer turn up on the doorstep - they were going around the local area warning people about the possible fumes and toxic irritants (no mention was made of the 300 propane and acetylene cylinders that were sporadically exploding, but hey, who cares about details!) I showed him my gas mask (illustrated above) and also told him that I owned a full current NBC (Nuclear, Biological, Chemical) suit, so I was probably OK with a few nasty smells. I think he was a tad nonplussed. You can buy gas masks, radiation detectors and body armour (as used by BBC war correspondents and others) online from the UK based store here.

I got on the 99 bus this afternoon after having a very enjoyable lunch with my Mum; sitting on the lower deck were four Mormons, none older than about 23 or 24, they all were wearing white on black name badges on their neat sober suits and generally looked quite civilised. One thing struck me, and had the journey been longer I might well have engaged them in conversation. Their badge titles were all "Elder", as in "Elder John Smith" - blimey, I know the Mormons marry and breed young, but that was taking the biscuit in my mind! Still, at least they were not hassling the other passengers or vandalising the bus, unlike so many of the other usual Belvedere and Erith residents. There was a very moving story in today's Times of Chavs destroying and then dominating a neighbourhood, to the extent that even the Police are now frightened to go there, you can read the story here.

Ian forwarded me a thought provoking music video from YouTube; you can have a look and make up your own mind. The track is SO him - manga animation and a Goth metal cover of a prog rock track. Personally I would have preferred if the band had picked a better Genesis song to cover - the one they chose was pretty poor, though they don't make a bad job of it, all things considered.