Things we don't see any more. 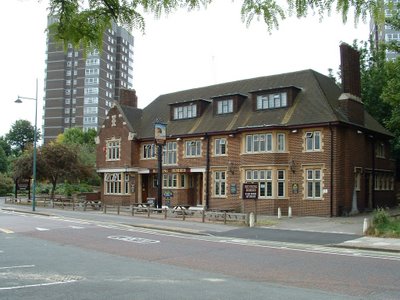 A photo of the Running Horses pub on Erith river front, which is shortly to re - open its' upstairs restaurant as a carvery after at least fifteen years. It used to be a real local bench mark for quality and value in traditional local eating. Let us just hope it can regain that reputation. I also hope that they get at least one cask ale on sale; currently they only sell Euro fizz lager and crappo wife beater cider - which suits the huge numbers of local Chavs, but of course, not the discerning drinker - though that is a misnomer in Erith, mainly due to the fact that locally "discerning" only refers to the ability to know the difference between bleach and drain cleaner....

I was having a bit of a think on the train back from Watford today; I was remembering all those things one no longer sees on your average high street. For instance, do you remember the Rabbit mobile telephone system? I thought not.

What ever happened to white dog poo? A popular topic of enquiry I know.

What about the bird's nests of tangled cassette tape you used to find in many streets, where a car stereo user had thrown out a C90 cassette where the tape had jammed, and the wind and some spurious local action had caused the tape to spool itself halfway along the highway. When did you last see that I wonder?

Anyway, here is a quality excerpt from a publicity film shot way back in early 1967, only a short while before the Marine Offences Act came into force, of offshore radio station Radio London - including footage of John Peel, amongst quite a few others. Enjoy.