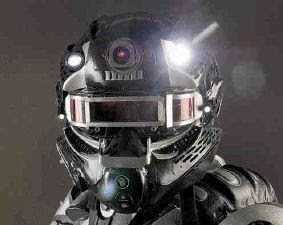 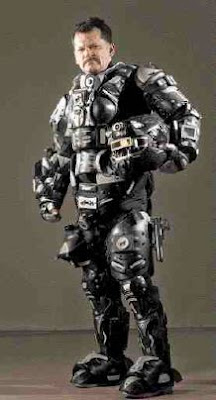 Pictured above is a Canadian inventor and dare devil by the name of Troy Hurtubise. He has invented a lightweight body armour suit intended for NATO troops in battle. Don't you think it looks one hell of a lot like the armoured space suit worn by the Master Chief in the Halo games?

Anyway, onto the meat of the post; after checking Anorak Nation tonight (one of the best sources of news on the irregular radio scene) I noted a link to yes, you have guessed it - YouTube. A BBC video featuring Rick Wakeman, Johnny Walker and Peter Moore giving an overview of the history of Radio Caroline, including quite a bit about the Ross Revenge. Wakeman complains that the ship is rusty, but in truth it is a floating paradise after being restored over the last few years, compared to when I lived on board, fifteen miles out on the North Sea in the late 80's / early 90's - if you don't know I used to present the overnight album rock show to a decent chunk of Western Europe's insomniacs. Rust, Diesel and RF burns were some of my overriding memories. A good bit of video for all his hamming up. There definitely IS a special atmosphere on board. Difficult to explain really, but the ship really does have feeling and a spirit. Watch the video here: