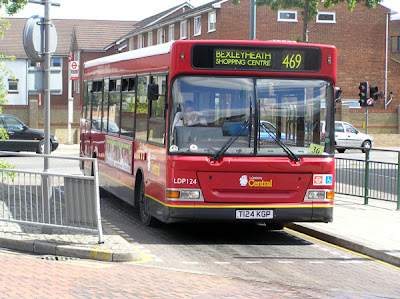 New Year was so quiet as to be virtually comatose for me; I have still been getting over the nasty chest infection that I picked up last Thursday. Nearly gone now, thankfully.

On Saturday night, I was sitting in my living room, watching the Lion, the Witch and the Wardrobe movie I recorded from Sky movies over Christmas, and trying to recover from the chest infection, when I noticed that there were a lot of engine idling sounds outside in the road. This normally happens when the local single decker bus has pulled up at the stop almost opposite my place. Large vehicles following on often have to wait until the bus pulls away as there is no space to overtake safely. It was approaching 9pm and the road is usually pretty quiet at this time.

Anyway, I looked out of the window to see a couple of Police cars pulling up, and traffic stretching pretty much as far as the eye could see in both directions. A number of people in high visibility jackets were talking on radios and looking very official. Curious, I put on my coat and went out to have a look. walking up a hundred yards in the Erith town centre direction, I got to see what was causing the hold up. A single decker bus had pulled away from the stop outside of the local corner shop, gone about ten yards, and then the whole of the drivers' side double rear wheel and transaxle unit had broken away from the main body of the bus - the underside of the bus was literally lying on the tarmac in a great puddle of transmission oil! The double wheel and bearing was lying on its' side a few feet away. The bus would not have been moving very quickly and no - one seemed to be hurt. The road was shut for a good couple of hours by the Police and a giant crane and tow truck was used to get the bus moved.

You can still see the scrapes in the road surface, and the patch where the warm gear oil partially dissolved the high grip coating on the tarmac. I wish I could have taken some photos of the whole thing, but unfortunately my camera is up at my Mum's right now, along with my Linux laptop.

I wonder if it will make the local paper?

On an altogether more serious note, I see that another small child has been killed by a Pit Bull Terrier. I was under the (erroneous) impression that these vicious and ugly creatures were banned as part of the 1991 Dangerous Dogs Act. Pit Bulls and Staffordshire terriers (the same thing in all but name) are generally owned by male Chavs wanting to look hard and impress their mates. Most dogs are not aggressive towards people by nature - it is the actions of their criminal, thuggish and hard of thinking owners that is mostly to blame.

Do you want a change of lifestyle? How about buying a premium houseboat? Colin and Danni's converted fishing trawler the M.V Admiral Jellicoe is now up for sale.