The Robot Guard pays for its' keep. 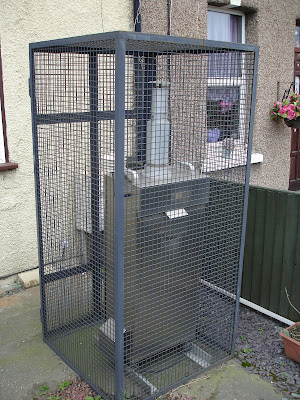 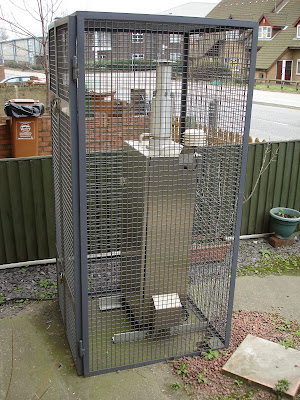 You may be aware that for the last eighteen months I have been playing host to an Air Quality Monitoring Unit in my front garden - click on either photo above for a larger version. It is a joint project between King's College London and Bexley Council to monitor air pollution and particulates in the local area. The unit has a series of very fine filters within it, which collect air pollution for 24 hours, the unit then automatically swaps the filter for a new one, and the exposed filter is stored in a container for later analysis at King's. Someone from Bexley Council comes to change the filter cartridge each Monday morning and collect the exposed samples. I volunteered as I thought it would be a good way to contribute something towards environmental control; my only caveats to Bexley Council were that I should be sent copies of the reports generated, and that I got my out of pocket electricity expenses covered, as the unit is plugged into my domestic power supply. I had been getting quite ticked off recently, as I had not had any updates or contributions to the running costs as had been agreed; the fault though is partly mine, as I have been rather reticent in chasing Bexley Council. All that changed on Saturday morning as I was just about to leave the house, the postman popped an official looking letter through my front door. Inside was a letter of thanks from the head of Bexley Council's environmental health department, along with a VERY healthy pay cheque for my troubles! Suffice to say it was far more money than I had imagined, and it will enable me to pay to get several job on the house done. In the past a few passing Chavs have asked what the unit was - my usual answer is "It's my security robot guard - I keep in in the cage in case it attacks people". The slack jawed and credulous plebs take it all in...

Talking of Chavs - as I invariably do at some point, I witnessed a heart warming and life affirming sight on Thursday afternoon. Mum and I were approaching Plumstead railway station after visiting Dad. We had been hearing Police sirens for a couple of minutes, but as we walked towards the station entrance, we could see three Police vans and two cars, along with the largest number of coppers I have seen in one place for many years. They had handcuffed and were manhandling a trackie and hoody wearing, viciously swearing, shouting and spitting uber Chav out of the station and then bundled him into the back of a marked Police van. I have absolutely no idea what the festering scrote had done, and in fact I don't really care - seeing him being thrown into the van followed (hopefully) by a jolly good kicking by some of the Metropolitan Police's finest made my day.

Today's video clip is 21 minutes long, but it is 21 minutes that went down in history. Queen utterly stealing the show at Live Aid in 1985.....