Linda Smith and the tunnel of doom part three. 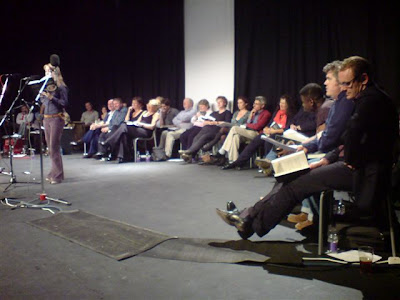 It is a year today since writer, comedienne and all round wit Linda Smith died. Linda was born and raised in Erith, though sensibly she upped and left as soon as she could. Linda famously said "Erith isn't twinned with anywhere, though it does have a mutual suicide pact with Dagenham!" The photo above was taken by Ian when he and Julie attended the recording of Linda's radio tribute show in October last year. It was later broadcast on BBC Radio 2.

The tunnel of doom (tm) has now got a new set of fluorescent lights, and the coat of battleship grey gloss paint now fully covers the wall tiles and conceals the old graffiti; unfortunately the local scrotes have already started scrawling new graffiti over the paint. All I need is one of those camouflaged hides used by bird watchers, several hours to myself and a powerful chainsaw.....

Ian's band Xenon have now got a MySpace website - you can check it out, along with their forthcoming single "Bittersuite" just click here.

I spent a while this afternoon in Erith Sports Centre - no, not doing anything unnecessarily energetic (I am too much of a Chap for that!) But I did attend Izzy and Ella's joint birthday party which was held in the soft play area of the sports centre; it is one of those rooms filled with padded shapes, things to climb, slides and pits full of rubber balls. Ian tried to persuade me several times to take my shoes off and join in, but I found the whole idea great for small children, but it would have been rather undignified had I begun larking about.

And now the video clip of the week. This one is a genuine classic. It was taken by an NCO in the French Army during a training session with a type of tripod mounted Anti Tank missile system called the Eryx. The clip lasts just over a minute, and is a bit slow and boring at the beginning, with much faffing around and muttering; DO bear with it though, as the last few seconds are hysterical!