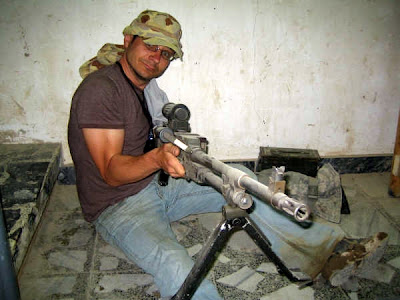 I have just received the above photo from Bongo; he has just returned to the UK after his fourth trip to cover the Iraq conflict as a freelance war correspondent / Emmy award nominated TV sound recordist. If you click on the link on his nick name above you will be able to read his detailed resume - and believe me it does not cover half the things he has actually done. I wrote about him last year whilst he was covering the Israel / Lebanon conflict, but for various reasons I had to pull the posting within hours of writing it (mainly it was down to his personal security and safety). You can see a small gallery of action photos of him covering various conflicts on my online Flickr photo account here. Sorry work colleagues, but the company firewall blocks this external link - all other readers will be unaffected. This time he has given the OK for me to post this missive. His given name is Stephen, but no - one who went to school with him would ever call him by that - and I am sure this still causes him much annoyance! He took the pseudonym "Bongo the Rabbit" way back in 1988 as a cover for his first ever job in the media - working along with me on Radio Lumberjack, the now defunct local FM pirate radio station that has done so much to shape the lives of many of my friends. He took the name with him on to Radio Caroline and from then on, the name has stuck, and as they say, the rest is history.