The only non smoker in Erith? 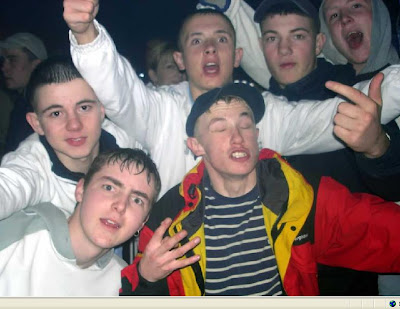 I am strongly of the opinion I have been too laid back and relaxed in relation to my Blog postings over the last month or so - I have been lacking the bile and invective that has characterised me for so long. Time to put that right.

I think that I am quite possibly the only non smoker in the whole of the town of Erith. Everywhere I see the local knuckle dragging, pasty faced pond life lighting up various noxious cheroots of unmentionable origin. It is all very depressing - although a little spark of hope glistens in the distance when I consider that all this anti social puffing will in time result in another kind of puffing - of their corpses as they make their way as smoke up the crematorium chimney, in the final act of environmental pollution. It appears that as soon as you have made it past reception class at school, you are issued with twenty Lambert and Butler cigarettes. I regularly see proto Chavs and Chavettes who can only be eight or nine years old, dragging away as if they have been smokers for years. Hopefully their inevitable burden on the NHS system will be both brief and painfully terminal. I have on a number of memorable occasions witnessed teenage mothers doling out fags to their already small and undernourished offspring - the most recent occurrence was at Belvedere railway station where I saw children of no more than six or seven years old being given cigarettes by their Mum. Depressing - you can just see the whole cycle recurring in a few short years.

And another thing. Tattoos. WHY? Why on earth do people pollute their bodies with this vile form of personal graffti? It is cheap looking, degrading and makes the recipient look like a docker or prison inmate. The results are always less than the sum of their parts. Discuss and leave a response via the reader comments option below, please.

When I first uploaded this missive, I also attached a video clip of the incomparable Spinal Tap, and the 1992 track -"The Majesty of Rock". Unfortunately the killjoys at YouTube decided that the clip was the copyright of Viacom, and pulled it from the site. Consequently the link broke so I have taken it down. Instead here is a clip of an experimental robot that is designed to interact with people. Shades of the android Ash in the original Alien movie I think.