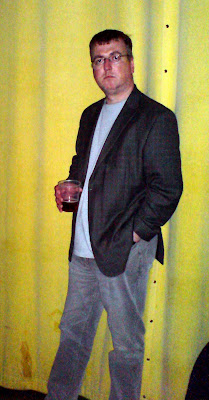 Above is a photo of me taken at last Saturday's gig. I have fiddled around with the brightness and contrast using my Linux laptop with Picasa, and I have also removed a very bad case of red eye. Thanks to Ian for the original photo. Just out of shot is the main PA system (I was only about a couple of feet from the bass bins and the beer in my glass was vibrating in time with the music).

I have come to the firm conclusion that Bexley Council has some kind of deal going with the Ministry of Defence. The Tunnel of Doom (tm) is now being repainted a second time in what appears to be War Department surplus Battleship Grey gloss paint. Once again the local scrotes and knuckle draggers are plastering the foot tunnel with graffiti faster than the council can cover it with fresh paint. Incidentally I saw a gratifying sight late on Thursday afternoon whilst on my way home. A speeding Police van shot along the pedestrianised part of the new Erith shopping centre and screeched to a halt alongside three other Police cars and another van. It turned out that a smack head had tried to hold up the Pharmacists' shop with a machete - he was after the stock of Methadone they hold. Apparently a staff member hit the silent alarm, and (for once) the local constabulary arrived whilst the crime was still under way. From what I was told by a witness, the Police pepper sprayed the oik and wrestled him to the ground. I got there as six burly coppers were struggling to manhandle the maniac into the back of the van. I trust that exposure to the methods used by DCI Gene Hunt of "Life on Mars" fame will have rubbed off on the local Plod. I cannot think of anyone more deserving of a good kicking than this particularly noisome Chav. On a further note, after last weeks' whinge about the increasingly aggressive Eastern European Roma beggars on the London to Dartford via Greenwich overland train line, I was hassled every day last week. I got so fed up that on Wednesday I reported the matter to the ticket office at Plumstead station. The lady in the office was very helpful and took my details and promised to hand them over to the Transport Police. I then went on my normal daily Dad visit. When I returned later to the station, there was a sight to gladden my eyes. Two coppers in the process of cuffing a couple of the very same Roma career beggars that had been hassling travellers earlier. Magic.

Over the Bank Holiday weekend both WNKR and Enigma 846 have been on the air, keeping the medium wave bands active and interesting. AM Pirate radio is not dead - it just smells that way. Don't forget the Bexley Real Ale festival next weekend.