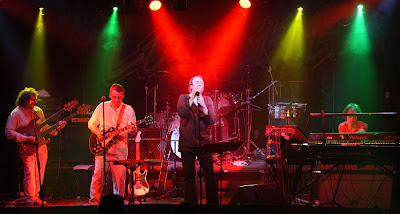 Ian and I saw early Genesis tribute band In the Cage at the Mick Jagger Centre in Dartford last night. Excellent musicianship and a full house meant that a great time was had by all. Afterwards, Ian and I repaired to my estate, where we were joined by Dieter and Maserati Alan for some Chinese food and a chance to watch the first episode of the new series of Doctor Who that I had recorded whilst at the gig.

The next morning I was getting dressed and padding round my bedroom. (Warning - high yuck factor information follows); I noticed that I seemed to have something loose in my right sock. Upon examination I found that the whole of one of my toenails had suddenly fallen off. There was just bare skin where the nail had been. I must be falling apart from the ground upwards. It did not hurt and was not in any way sore - very strange indeed.

More Eastern European beggars on public transport. Does anyone know where they come from? They seem like pigeons - when they are present you notice them - but where do they go to when they are not shaking an old paper cup with a few coins at you? They are now working the Dartford via Greenwich overland railway line, though I have yet to see a single traveller give them a penny. They all seem to carry a (seemingly) drugged up toddler in a swaddling wrap afound their chests, presumably to act as an assault deterrent. I would have thought a Kevlar vest would have been better.