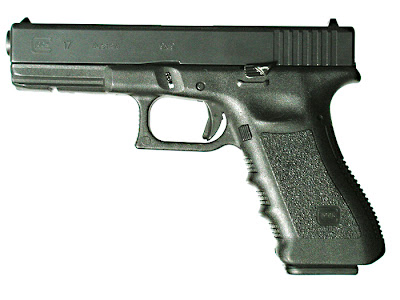 Pictured above is something from my past. In the early to mid nineties I was a keen practical and police pistol shooter - I held a UK Class One Firearms certificate (the highest grade of licence at the time). I used to own a Glock 17 9mm semi automatic pistol like the one above. I was a keen member of a local shooting club, and was of capable of shooting one and a half inch groupings from thirty metres, a pretty good rating at the time from what was a standard combat pistol. Of course, that all changed after the total UK handgun ban in 1997. I was a good competitive shooter and I do miss it. I had to surrender my shooting gear on the day of my birthday - not a pleasant experience, and as the Police predicted, gun crime has risen exponentially ever since. You can read about it here.

A while ago I posted a couple of photos of a Canadian chap who had invented a system of articulated body armour that allegedly would make the wearer almost invulnerable to small calibre weapons fire. He was hoping to sell the idea to several Western defence organisations. I have now found a video of his armour and a demonstration of it online - it makes exceedingly interesting viewing: