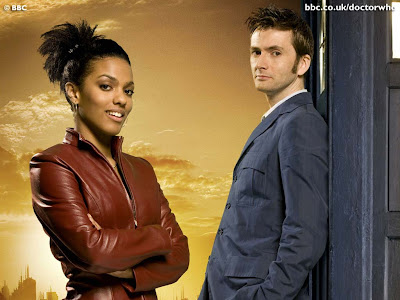 By this time next week we will have seen the first episode in the new season of Doctor Who. I for one cannot wait. There is an amusing (and scarily accurate) article about Whovians here and I also found the following web site belonging to a New Zealand Who fan who has rather too much time on his hands. I am firmly of the opinion that we are currently in the midst of a new "Golden Age" of British science fiction. As well as Doctor Who, we have had the ambitious live performance of The Quatermass Experiment and quality shows like Primeval, Life on Mars and *Cough, ahem* (mumbles) Robin Hood. OK, Maybe a silver age then.

Walking around Bexleyheath Broadway yesterday, I popped into several shops selling the Sony Playstation 3. I had seen the hype over the UK release earlier in the week and was interested to see what it was all about. I saw a racing game called Motor Storm running on a large Hi Definition television. At first I thought I was watching a satellite sports channel showing off road racing - it was only when there were a couple of horrendous pile ups and the race was not stopped that I realised it was a PS3. Truly photo realistic; I was very impressed indeed. I won't be buying one myself though; The thick end of £500 for the console, along with also needing to buy an expensive HD television to play it on - I don't think I could justify it really. I have also heard rumours that the price will be dropped by nearly £100 just before Christmas. Either way, I don't see the PS3 romping out of the stores at this time. An impressive technical feat nevertheless.

I have had a couple of anonymous comments relating to an article I posted last October regarding the hideous fish statue that has been constructed on the main roundabout in Erith town centre. Many thanks for your compliments, whoever you are!

This weeks' video is of one of my heroes, the incomparable wit, author and comic actor Kenneth Williams. Here he is, holding forth on "Parkinson" in 1980. He is sadly missed. You can hear his archive recordings regularly on digital radio and online broadcaster BBC7.