Help for an old stager. 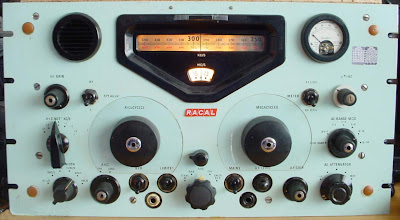 Well, now time for a mini appeal. The imposing box pictured above is a Racal RA17 H.F Communications Receiver from the 1960's - I blagged the photo above from Google photos and touched up some imperfections using Gimp on my Fedora Core 6 Linux laptop. I have got an RA17 that is cosmetically similar (though in marginally better condition than the one above) that was purchased from a silent key sale on my behalf by my friend G3VTT some years ago. The RA17 was built between 1954 and 1969 and was used by the military and intelligence services for many years for receiving all sorts of clandestine communications on the short wave bands. When new, my own late 1968 ex Royal Navy model cost about the same as a brand new E - Type Jaguar!

Sadly, whilst my own model looks great, it is now exceedingly deaf and in need of complete restoration. The chassis is fine, but many of the electrolytic capacitors and valves need replacing. Unfortunately I have neither the time or the skills to undertake the extensive task myself. If anyone knows of a reliable restorer of vintage valve radio gear, I would love to hear from them. Can anyone help?

The second Bexley Real Ale Festival is scheduled for the 12th to the 14th of April. Last years' inaugural event was in my opinion the best one of the year. The sequel will be fun and instructive to attend. I will be going on the evening of the Friday. I had planned to add this to yesterday's ramblings, but Blogger was playing up big time and it would not accept an update to my original posting. Ho Hum. The following video dates back to 1995 and shows what happens when you try lighting a Barbecue using a bucket full of liquid oxygen.