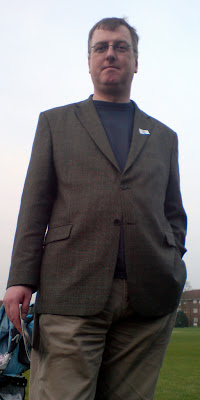 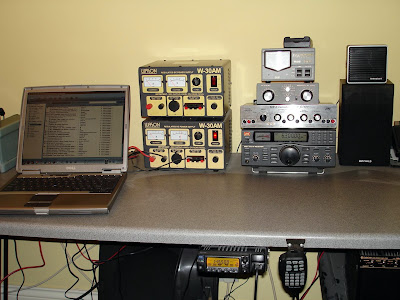 As some of you will already know, I hold an (advanced class) Amateur Radio licence, and have the radio call sign M1CXN. I currently spend most of my radio time on the 2 Metres VHF band. If you have a radio scanner or other such device, you can sometimes hear me on 145.500 MHz. Getting into amateur radio is an excellent way of gaining an appreciation of how electronics actually work, and how that mostly forgotten physics you studied at school can be put to practical, everyday use.

I have added a few new photos to my Flickr online photo album - sorry work colleagues, the company firewall blocks this site. Try from home and you should be OK.

Fellow Blogger Simon runs an excellent site concerning itself with matters related to Plumstead and Plumstead Common. I strongly encourage to you to visit his Blog Site here.

One thing that annoys me almost as much as Chavs playing music on mobile phones on public transport is the terrible use of spoken English by a large contingent of people - generally those who could be classed as he belly button fluff stuck in the filter at the shallow end of the gene pool. Some examples include:

On Saturday, work colleague and good friend Thore came round in his shiny new car. Suffice to say it goes like a greyhound with half a tube of Ralgex stuffed up its' nether regions! He's a genius application and web developer. If you want something created for the online world, I would highly recommend his services. Thore has his own website here.

My local fish and chip shop has to my dismay, recently erected a sign on the outside which reads (and this is a direct quotation) "Freshly fried fish and chips!!!" If you look on the recent comments on Simon's blog site, you will see I have espoused the view that anything more than one exclamation mark in a statement shows both a lack of imagination and intellectual vacuity.

I won't bore you with any more - I am sure that you can fill in the gaps yourselves; I think most intelligent people can recount a whinge which has some relation to the above. This weeks' video clip is from the campaign for music free public transport. A real bugbear with me too - see what you think anyway.