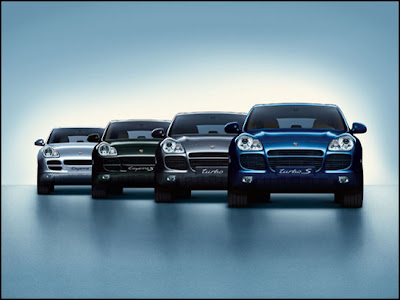 As I have previously noted, fellow Doctor Who fan, Plumstead resident, and prolific online journal keeper Simon and I seem to have concurring views on a number of subjects. One thing that has been getting us both rather hot under the collar over the last week or so is the subject of Chelsea Tractors - specifically the Porsche Cayenne. I love off road vehicles such as anything made by Land Rover, Jeep or Tatra. Stuff that loves to get covered in mud, ford rivers and climb impossibly steep slopes. You can tell a genuine working off roader quite easily; even if it has been washed and cleaned you will still find tell tale signs, like moss growing in the window runners (a dead give away, especially in old Landies). So where is this all going, you may wonder? Well, parts of South East London seem to have been blighted over the last couple of years by what the motoring press sometimes refer to as "soft roaders". Big chunky, upright cars that look like they were built by Tonka for small children to play with. The trouble is, they are rubbish off road, and because of their upright stance, pretty poor on road too. I am most definitely not going to get into "Middle Class bashing" as I don't regard soft roaders as a middle class thing - it is more to do with affluence.

Nowadays I don't think money and class share the link they used to. I would consider myself scraping somewhere into the bottom end of middle class, but I have hardly got a penny to spare, yet someone like that spud faced, gurning chimp Wayne Rooney is rich beyond the dreams of avarice, yet firmly rooted in the gutter. You can take the scum out of the slum, but not vice versa. I think class is nowadays far more linked to tastes and aspirations. Affluent Chavs like Rooney and his football - ist chums have the money, but lack taste, discretion or subtlety.

Walking along Plumstead Road, from Plumstead Station, past the long row of run down shops and heading towards Pettman Crescent as I do each afternoon, I recently saw two Porsche Cayennes and a brand new Honda CR-V soft roader, all within no more than ninety seconds. When you consider what a run down and deprived area it is, it makes one wonder where the money to buy such vehicles comes from. A Cayenne retails at between £45 and £82 grand, depending upon model and specification. A lot of money to make a questionable fashion statement. I get the feeling that affinity for the dubious charms of the Cayenne comes from Gangsta Rap videos and the associated "Bling" - (please excuse my language, I cannot abide that term and will not use it again). Quite by coincidence, there is a review of the Cayenne in Today's Sunday Telegraph - you can read the review here. Anyway, please feel free to post comments using the link below this missive, and don't forget to read Simon's Sibonetic Blog as well.

Not long now until the lighting of the ceremonial pipe that signifies the beginning of the annual Chap Olympics in London's Bedford Square. I hope to attend along with a few like minded compatriots. Certainly a change to see some smartly dressed people who understand the power of Tweed.

Ian's other band Oxide are headlining next weekends' annual Farnfest (warning - loud music on this site) in Farnborough, Kent. I will be going along for moral support and liquid sustenance, as it would be churlish not to since the festival's biggest sponsor is Shepherd Neame.

This week also marks the thirtieth anniversary of the release of Star Wars. Goodness that makes me feel old! I remember going to the Woolwich Odeon to see it when it first came out. As anyone who knows me will know, I came out of the cinema a changed little boy. Below is the original cinema trailer, released by a scared movie studio who thought they were releasing a turkey onto the world. From the evidence of this trailer, they had good cause - it absolutely stinks! It is painfully obvious the excerpt was cobbled together from unfinished shots; the sound, special effects, and the iconic music are all missing to one degree or another. To be honest it is a mess, but an instructive one. If you were to release a trailer like this nowadays, it would kill the film. See what you think and comment accordingly.