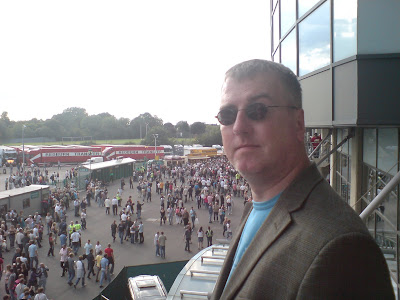 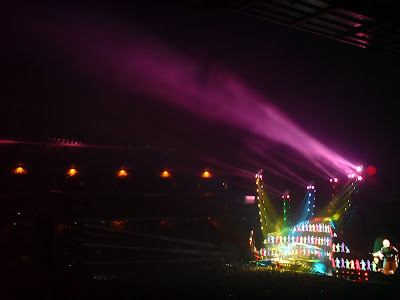 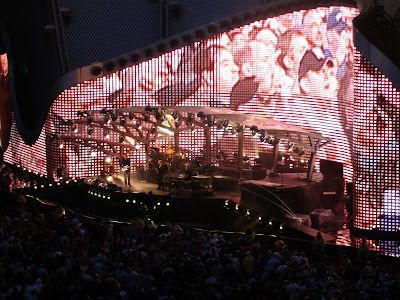 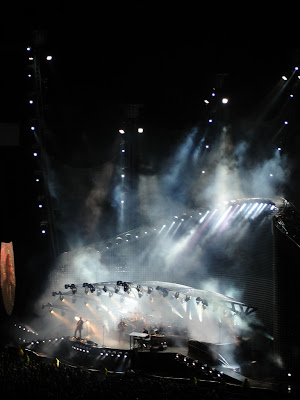 You may or may not have seen the photos I posted at 2AM this morning - they are posted below this in the previous entry - click on any one for a full sized version. I was too knackered to cobble together any worthwhile prose, and needed to eat and get to bed. Much refreshed now, I am ready to do my Sheridan Morley bit on yesterday's Genesis concert at Twickenham Stadium.

Twickenham Stadium looks a right old mess from the outside. They have the builders in, and it shows. Once inside however, the venue is excellent, and far better than the old Wembley (though I cannot yet comment on how it compares to the new version). They allow drinks and food to be taken onto the terraces, and no - one bats an eye at a camera. Times have changed for the better in this respect. Anyway, what about the band and their performance?

The Good.
The sound was awesome - easily the best concert sound I have ever heard by a mile. The band employ the very best sound and lighting techies, and the best equipment and it pays off in spades. The sound was of almost audiophile standard - the nearest comparison I could make was that the sound was like HD video for the ears. However there were a couple of occasions when for an unexplained reason it became muddy for a few seconds. Overall it was excellent though.
Set design - you will see from the photographs that the entire set was a giant video screen with live footage mixed with archive and custom CGI animation. There were a couple of huge oval video screens which would blow away any domestic plasma screen - goodness knows what these units must have cost. Giant VariLite columns were like the monsters from War of the Worlds, looming over the stage below. It would appear that no expense had been spared to show that no expense had been spared.
The set list. Always a difficult choice as the band have to please both the fan of the 80's pop stuff, and the more traditionalist fans of the band's earlier symphonic Prog Rock period. I felt that they got the mix about right, but that is just my opinion.
The spectacle - Genesis do stadium rock like few others, they really show the divide between ordinary rock combos and the true supergroups.

The Bad.
Phil Collins did at times seem to be mentally running through his shopping list; his mind was elsewhere and I have heard the same stage patter from him before. Still the consummate professional - and the rest of the band were on top form - Tony Banks even managed a couple of smiles! I am used to just seeing the top of his head hidden amongst vast swathes of keyboards. He has thrown in his hat with Korg now, and dumped the analogue synthesiser gear. I think this may have made some practical sense, but nothing sounds like a Mellotron choir like the real thing.
The whole gig was very well organised - in some ways too organised; there was absolutely no spontaneity or improvisation (except when Daryl Steurmer's solo during "The Firth of Fifth" went a bit wonky and he used some widdly noodling to try and cover it up) - I don't think he fooled many people. I understand the need to have split second timing for the lights and video effects, but it does take the edge off a performance. This is one area where the best of the Genesis tribute bands have an advantage.
The seating in Twickenham is atrocious - I had to get out and walk around on four occasions as there was absolutely no leg room and my dodgy knee started to ache naggingly. The view, accessibility, food outlets and loos were all top form though. Parking would have been a real problem had I not had the kind offer from Russ to park in his front garden, less than a mile from the venue.

A full set of gig photos in a number of different freely downloadable sizes can be found on my Flickr website (link).