Her loss, not mine! 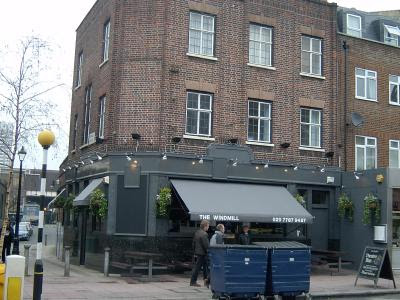 Well, as most of you know, what I had thought was a well kept secret was successfully leaked by my Aunt Betty in America, and Ian here in the UK to the world via my Blog Email list. Okay - it is out; this week marked my fortieth birthday. I abhor "fuss" and I had not planned on making anything of the event, but forces outside of my control were at work. Many thanks to all of those who have Emailed me over the last few days - it is humbling and greatly appreciated. Today I got taken out for lunch by my Boss (Olly - did you know your full name can be successfully Googled?) and a number of people both from my team, and some other close work colleagues; after some deliberation on my part (mainly down to the numbers involved) I decided that we should repair to the Windmill in The Cut, (see the photo above) very close to both the Young and Old Vic theatres, and reputedly Kevin Spacey's local boozer. The place serves excellent Thai food (apparently it was one of the very first in London to do so) and it has a somewhat Bohemian atmosphere, with the walls covered in actors' signed photos. They even serve Adnam's Broadside (though it was a tad on the warm side for my taste, but then, I am accused of being a beer snob - I digress).

My colleagues and I were sitting, chatting and enjoying a quiet drink whilst our food orders were being freshly prepared, several heads turned to look behind me - I looked round through the adjacent window to see the Queen in her Royal Rolls - Royce gliding past! She could have stopped by for a swift half of absinthe and a chat I suppose. Still, missing my birthday lunch was her loss, not mine.

Something that has recently occurred to me after some observation - have you noticed that you never, ever see a Chav wearing spectacles? Either the Chav gene is especially robust, or more likely their parents (you never know, they may come from a breeding pair, however unlikely that may be in practice) have never thought fit to get their spawn's eyes tested. I suppose that poor eyesight is no bar to swilling trampagne, accosting passers by, sponging benefits and thieving oxygen from the more deserving.

Email ThisBlogThis!Share to TwitterShare to FacebookShare to Pinterest
Labels: Thai food, The Queen.