The Marine Offences Act 40 years on. 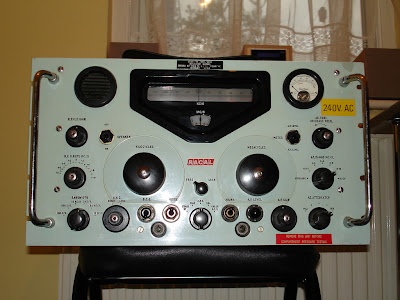 Above is a photo of my venerable Racal RA17 communications receiver that needs a complete overhaul and refurbishment. This radio cost as much as an E-Type Jaguar in the 1960's! Talking of radio in the 1960's....

It is now forty years since the Government of the time banned offshore radio (often called pirate radio, but this is a misnomer). From August 1967 the Marine Broadcasting Offences Act made it illegal to operate or supply radio stations in International waters from the UK. Radio Caroline continued at sea until 1991, and yours truly did quite a bit of growing up whilst serving as a DJ and crew member. The world has changed remarkably, but that bid for a little freedom of thought and speech finds itself (in spirit, at least) mirrored in the World Wide Web.

Now that we have encountered some hot and sunny weather, one very disturbing phenomenon is occurring amongst Chavs around the South East London and North Kent environs - they are removing their romper suit like jogging tops or football shirts, and going naked from the waist up. Extremely unpleasant indeed. Their scrawny, malnourished torsos are often disfigured with tattoos and distasteful piercings. I am someone who detests any form of public nudity; indeed you will never, ever find me wearing shorts or foreign garments like culottes that show horrid hairy legs (shrank in the wash, did they?)

A pair of chinos, a plain shirt or T - shirt and a tweed jacket suffice. A degree of sartorial dignity should be expected of any gentleman.

Here is a clip from a recent local TV current affairs show about the 40th anniversary of the MOA: