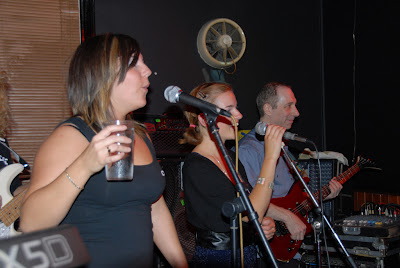 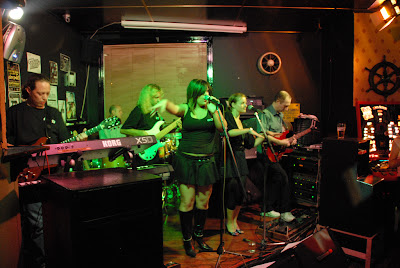 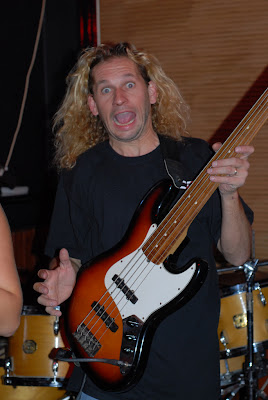 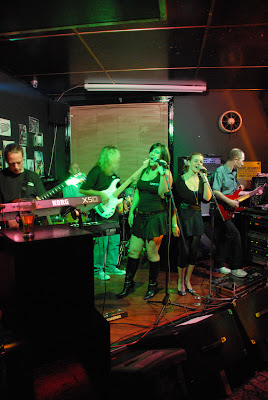 Here are a few of the photos from Friday night's gig at the Ship in West Street, Erith. Mark's band OCD played a blinding set; a pity the lighting was so poor; I ended up using flash for many of the shots, which ideally I would like to avoid. It just goes to show that however good the camera, basic physics can prevent getting the shots one would wish. You can see the full photo set on my Flickr site here.

I witnessed a really heart warming sight earlier this week; I was on the train back from London to see my Dad. When it stopped at Charlton, a couple of under nourished and furtive looking chavs, each carrying a huge bundle of shiny new copper pipes got on to the next carriage. I thought "this looks a bit dodgy" but as they offered no personal offence, I dismissed it and returned to reading the Times. Later, as the train drew into Plumstead, where I get off, a posse of Transport Police and Community Support Officers lined the platform; when they saw the pipe carrying chavs on the train, they charged on board and dragged them off and arrested them for theft of the copper. At this point I left, ardently hoping pepper spray or even a taser might be employed.

I notice that almost nobody posts comments on my missives; if you look at the base of this entry, below the video clip, there is a "comments" link in beige text. You don't have to sign up to anything or provide any identification if you decide to provide me with feedback. As for today's video clip - make of it what you will....

Email ThisBlogThis!Share to TwitterShare to FacebookShare to Pinterest
Labels: OCD, The Ship