Beggars and a Leopard. 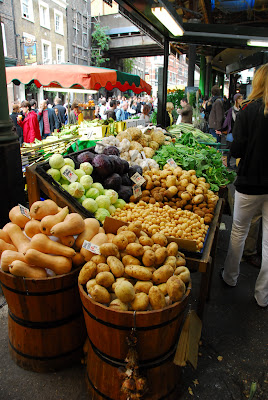 I took the photo above a couple of weeks ago at Borough Market. I thought that it looked suitably autumnal for this weeks' blog posting. Click on it for a larger view. More of my photos can be viewed here.

On Wednesday evening I was getting onto the train at Plumstead after visiting my Dad, when at the opposite end of the carriage, I noticed a man and a woman of the British Transport Police getting on too. I watched from a distance as they approached a group of six or seven Roma Gypsy beggar women and asked to see their tickets; the women feigned misunderstanding (they are regularly stopped by law enforcement, and I guess they view it as an occupational hazard), but the two officers insisted that the group leave the train immediately. After what seemed like several minutes of vocal protestation (but still no ticket production) the Police managed to persuade all but one of the group to leave the train. The one who was left on board suddenly started screeching and pulled what looked to be a large pair of scissors from her bag, which she then waved in the direction of the WPC. In a flash, the officer pepper sprayed the beggar in the face and dragged her screaming from the train by her hair. I don't think the Police can be too careful after the recent spate of shootings and stabbings of serving officers. I don't know what DCI Gene Hunt would make of it all.

Apple have just released the latest version of their excellent Unix based OS X operating system. The latest 10.5 release is called Leopard, and it offers some really ground breaking features. Below you will see three video clips giving an over view of three of the over three hundred improvements and features within Leopard. Contrary to widespread belief, there are several alternatives to Microsoft Windows, including Linux, the BSD OS family, and of course, Apple's OS X. Update - I have now pulled the clips as it seems a lot of people were embedding them in Blogs, and they were causing all sorts of latency problems due to their popularity (the video clips were running SLOOOWLY!) instead here is a link to the YouTube OS X page here.
Posted by Hugh at 6:54 pm