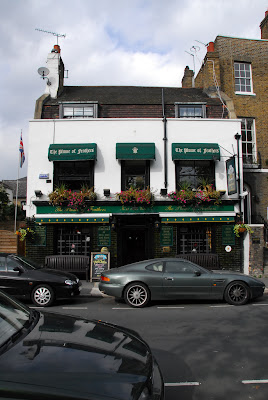 The photo above is the Plume of Feathers pub in Greenwich; click on it for a bigger version. Last Monday I took Bob out for a day trip - we visited the National Maritime Museum and had an abortive trip to the observatory (it was full with school parties, so we left it for another time - I then decided that Bob needed a little more experience with English traditional pubs). I had the best steak sandwich I have ever eaten, washed down with a couple of pints of well served Harvey's Sussex Best Bitter - bliss. And no, the Aston Martin DB7 parked outside is not mine. As if.

Erith has been in the spotlight for all the wrong reasons again over the last few days. The Chavs who killed a local man whilst playing with his son at Erith Sports Centre have now been tried and sentenced. You can read about the story here. Two years inside seems pitifully short a sentence; the BBC News website has an online discussion about the subject here.

I have to report the untimely death of larger than life former Radio Caroline colleague and fisherman Dave "The Fish" Turner. You can read his official obituary here. There's not more that I can add - I don't know anyone who had a single bad word to say about him. I know for many people he will be sadly missed.

Ian Camfield of indie rock radio station XFM has seen my photos of last weeks' Rush gig at Wembley Arena, and Emailed a mutual friend with the message "The pics are amazing, they look like the kind of thing you'd see on the band's actual website."

Something that will shortly be upon us is Halloween. I have not got any quibbles with the original pagan and traditional origins of this ancient festival; what annoys me is the almost complete Americanisation of this event. Trick or Treating, dressing up in horror costumes and the like is a relatively recent part of the average British child's year. It can be traced back to 1983 and the UK release of the Steven Spielberg film "ET" where it was an integral part of the film's plot - this was the first real exposure that American Halloween culture and behaviour had been given outside of its' borders. As with so many things both good and bad (I am not a hater of the US by any means - quite the contrary, though like all of us they have their strengths and weaknesses) there is nothing wrong with kids dressing up and having some fun, but it does seem to have been at the expense of Guy Fawkes Night, as only a couple of weeks separate the two events. British kids (because of their parents) are slavishly copying a foreign tradition at the expense of something home grown. Let's take back our history and culture and make Fireworks Night something special again.

As for the verminous, slack jawed gits that let off fireworks for several weeks before and after the event, I think prosecution and sentencing should be stricter. One night a year is fine, but when my local area sounds like downtown Basra for night after night (and can act as a cover for gang related shootings) then something is wrong.

This weeks' video is a quick and simple method of preparing home made Naan Bread. You can leave an opinion by clicking on the comments link below.