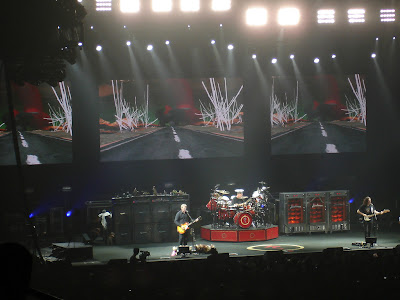 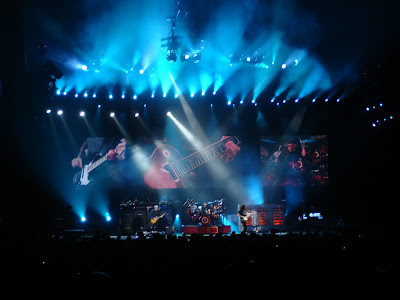 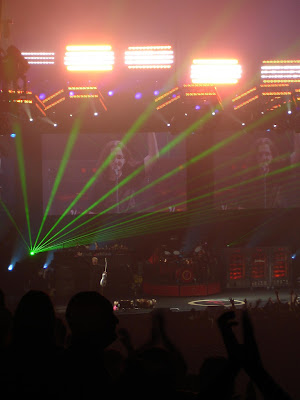 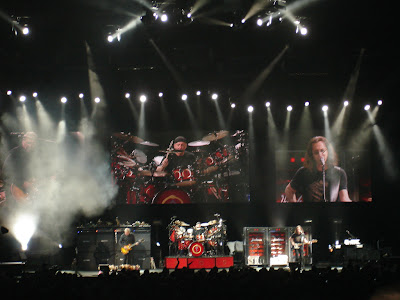 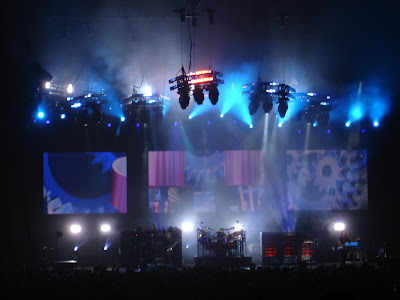 Above is some footage shot on a mobile phone camera by electronics genius and very long time mate Bernard of the track "The Spirit of Radio" from last night's Rush concert at Wembley Arena. Unfortunately, although both he and I were there, we did not manage to get together.

Now - the good and the bad.

The venue seating was horrible. The seats are still too cramped and close together, even after the multi million pound refurbishment and makeover the place has recently had. During the interval we ended up asking a marshal if we could move seats as everyone in the main floor area was standing and if you were not tall you could not see. We moved up into the stalls where there were some unsold seats and were then fine. This explains why the angle from which my photos changes during the gig.

I also felt that the band played a little too many tracks from their new album "Snakes and Arrows". It was obvious that many in the audience were unfamiliar with the new material, and the biggest reaction definitely came for the classic tracks, such as the one on the video above.

The band did two one and a half hour sets separated by a fifteen minute break; I felt it went on too late; I saw a number of people leaving before the end as they were worried about missing their last train. The gig finished at 11pm almost on the dot.

The Band were on absolutely top form; three musicians (who manage to sound like there are six of them on stage) playing technically complex, demanding music and making it look completely effortless. Geddy Lee's trademark helium vocals held throughout the three hour concert - impressive for someone pushing sixty. The virtuosity of the band is awesome - a real example of what can be done with three people taking their respective instruments to the very limits of possibility.

Humour - many people think Rush are humourless techno rock maestros who navel gaze; nothing could be further from the truth. The opening video clips, running visual gags and the incongruous on stage presence of three full size rotisserie chicken ovens (complete with a roadie dressed as a chef) put paid to that.

The lighting and sound. No doubt you will have seen my photos from last night's blog posting; you can catch the full set of shots, including many of the lasers and flying wire UFO lighting units from my online photo album here. Wembley Arena is notorious for poor sound, but extensive use of audio blankets and digital processing made the place sound the best I have ever heard it - though not quite up to the standard of the Twickenham Genesis concert earlier this year.
Posted by Hugh at 8:40 pm